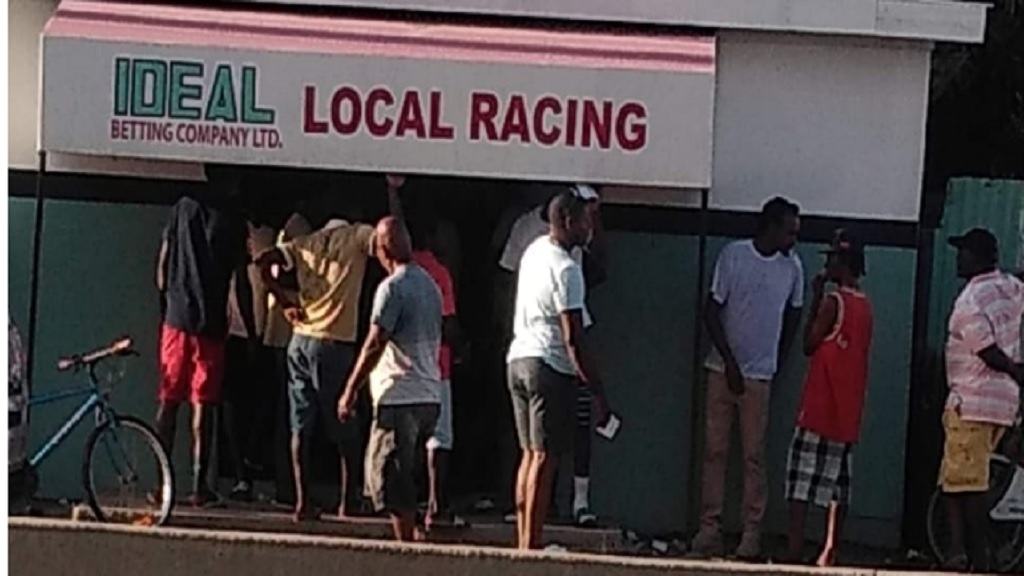 Patrons gathered at a betting shop in Portmore, St Catherine on Saturday, March 21, defeating the Government’s appeal for ‘social distancing’ in its efforts to curb the spread of the novel coronavirus (Covid-19).

The horse racing industry was dealt a major blow on Saturday with the announcement that operations at Caymanas Park will be closed effective midnight.

Horse racing promoting company Supreme Ventures Racing and Entertainment Limited (SVREL) made the announcement through a press release, a few days after it received permission from the Jamaica Racing Commission to stage three spectator-free race meets with no wagering at Caymanas Park as the Government increases its efforts to curb the spread of the novel coronavirus (Covid-19).

Two of the three spectator-free race meets were held the first of which was run on Tuesday and the second on Saturday.

The release from SVREL stated that the company has been in dialogue with the Government's regulatory body for betting and gaming in Jamaica - the Betting Gaming and Lotteries Commission (BGLC) since late Tuesday when the agency released a notice to the public that “all gaming lounges, betting shops and bars with gambling machines must close.”  That notice effectively shut down the Off-Track Betting (OTB) parlours, a source of major revenue for the promoting company

Twenty-four hours later, SVREL was then given the go-ahead to re-open operations and the OTB network after the BGLC announced a retraction of the notice.

However, SVREL stated that operations were again affected during spectator-less racing on Saturday as "police shut down several OTB operations across the country, including Charles’s OTB in Mandeville, which was padlocked, effectively shutting out both the owners and customers."

SVREL General Manager Lorna Gooden stated that “while we have tried to cooperate fully with the orders as we understand them, the situation has become untenable.  Based on the feedback coming from our retailers the security forces seem to be unclear regarding the position of the regulator.  We cannot put our OTB network at risk for fines, imprisonment, shutdowns, and unnecessary spending."

SVREL further stated that the race track will continue to house and exercise horses while ensuring that persons adhere to the social distancing and other required public health protocols.

On Friday, Prime Minister Andrew Holness revealed that three more infections of the coronavirus have been confirmed in Jamaica, raising the tally to 19 cases in the island.

More than 275,000 coronavirus cases have been confirmed globally, including over 11,000 deaths, according to a running tally by Johns Hopkins University. At least 88,000 people have recovered.

For most people, the new virus causes only mild or moderate symptoms, such as fever and cough. For some, especially older adults and people with existing health problems, it can cause more severe illness, including pneumonia. The vast majority recover.