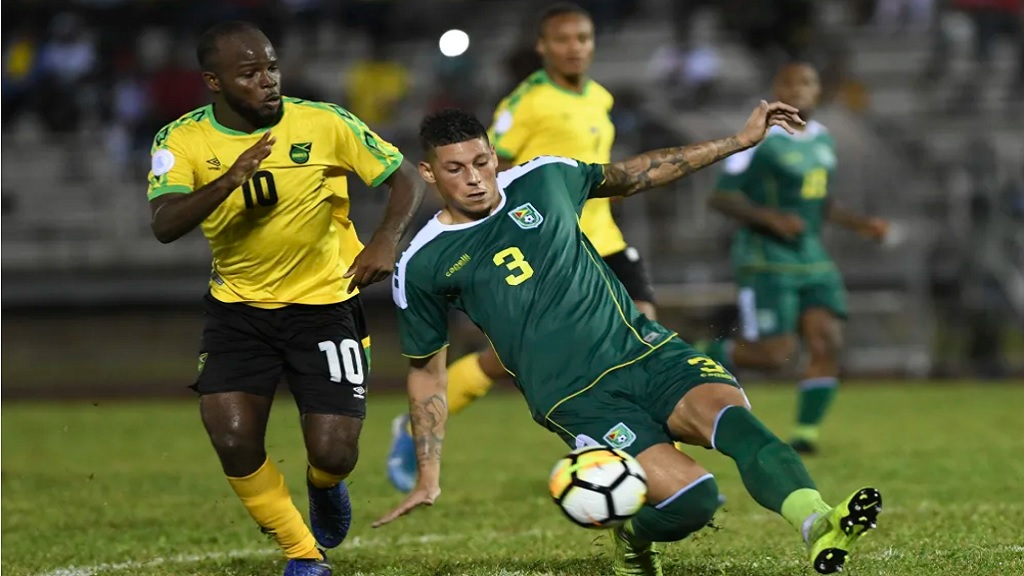 Matthew Briggs (right) of Guyana moves away from Javon East of Jamaica during their Group C of League B fixture of the Concacaf Nations League at the Montego Bay Sports Complex on Monday, November 18, 2019. (PHOTO: Concacaf).

The Concacaf Nations League semifinals and final in June were called off on Friday.

The U.S. had been scheduled to play Honduras on June 4 in Houston, with Mexico meeting Costa Rica in the other semifinal. The winners were to play three days later at Arlington, Texas.

The Confederation of North and Central American and Caribbean Football said Friday it made the decision due to the ongoing coronavirus pandemic. It is not yet known when the matches will be rescheduled.

Jamaica's Reggae Boyz, who paraded in Group C of League B of the Nations League, had completed their schedule in November following a 1-1 draw against Guyana at the Montego Bay Sports Complex in Montego Bay.

Jamaica finished with an unbeaten record of 5W-1D-0L and the top spot in the group. The Reggae Boyz will feature in League A in the next edition of the tournament.

A release from Concacaf stated that "our thoughts are with all the communities affected by the spread of COVID-19 at this difficult time. As we continue to assess our competitions scheduled to be played in the coming months, the welfare of everyone involved in football across our region remains our first priority.

"Given the ongoing public health situation, and following consultation with FIFA regarding the international football calendar, we have made the decision to suspend the Concacaf Nations League Finals, which was scheduled for June 4th – 7th 2020 in the Houston and Dallas areas.

The event, which includes the Costa Rica, Honduras, Mexico and USA men’s national teams, will be rescheduled to take place at a later date in venues to be determined. This will be confirmed following further discussions with FIFA regarding the remaining international windows in the football calendar, and will obviously be subject to public health authorities deeming it safe for professional sports events to resume."

Concacaf further added that "following the same considerations and discussions with FIFA, we have made the decision to suspend the Road to Gold Cup qualification matches scheduled in the June international window and the Flow Caribbean Club Championship scheduled for May. We will discuss with stakeholders format and scheduling options for these matches and communicate our plans in due course."