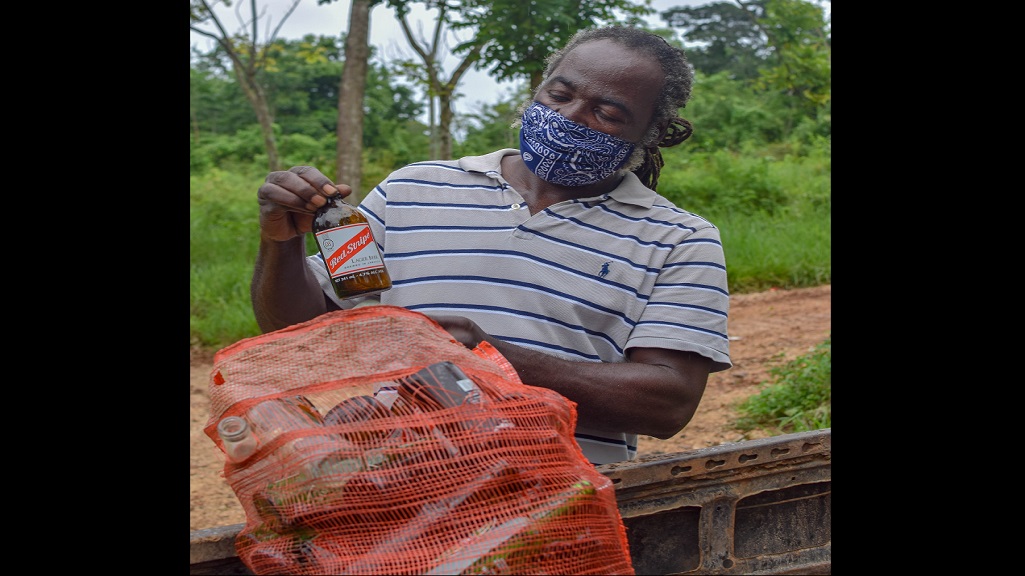 St Ann ‘Bottlepreneur’ Leonie Winkle cleans a Red Stripe bottle as part of his bottle returns business. Since the COVID-19 pandemic hit Jamaican shores, Winkle has turned to the Red-Cycling initiative as a means to earn additional income.

Difficult times birth resilience, determination and an unmatched drive to achieve success. This is true for 45-year-old Moneague resident Leonie Winkle. Always brave in his entrepreneurial quests, Winkle made the bold move of venturing into the bottle business more than 20-years ago.

Today, he credits this business for his ability to adequately provide for his four children.

During the early years of the business, Winkle would spend his days toiling underneath the blaze of the morning sun roaming the grounds of churches in the 90’s collecting bottles to sell in hopes of making enough money to provide for his family. As evening descended, and the sun retreated behind the hills, he washed every bottle by himself, ensuring their suitability for reselling.

Having washed enough bottles to fill hundreds of crates, he would wait to peddle his wares to the Red Stripe trucks that often frequented his community.

“I used to sell them to trucks that used to come from Red Stripe and I would tell dem dat I have about 500 crate and dem woulda come pick it up. Dat mi use fi mek sure seh mi kids dem have everything dem need like Wi-Fi and cable,” he said.

Winkle stated that the work was harder on some days than others, but the motivation to ensure a comfortable life for his family allowed him to persevere. The hard work of their father did not go unnoticed by the children as they would sometimes turn aspects of his job into a family affair by helping their father wash the bottles to be sold.

Undoubtedly, the COVID-19 pandemic has stalled the economy and forced many businesses to lay off workers as they try to deal with the associated financial burdens. With hiring being slowed to a crawl, many Jamaicans have become creative in how they earn a living. Through the Red-Cycling initiative, selling bottles has emerged as a viable and legitimate means of doing so.

Navigating the new normal has not been easy for the self-employed businessman because of the restrictions placed on movement and the time in which he has to complete his tasks. “I have to work harder now with shorter working times because of the curfews put in place, but it could be worse so I won’t complain,” stated Winkle.

The ‘bottle-boss' sids selling bottles has become his primary source of income and is grateful for the boost in profit provided by selling Red Stripe bottles. The Red-Cycling’ initiative has eased the squeeze put on business owners due to the adverse economic effects of the pandemic.

“It helps a lot when they buy because less people are employed and di odda day dem gi wi a likkle raise,” Winkle stated.

The raise is in reference to the brewing company increasing the resale value of bottles by 100 per cent. Consumers will now receive $20 on each Red Stripe, Red Stripe Sorrel and Lemon Paradise, Heineken, Smirnoff, Dragon, Guinness and Malta, $600 for a full crate of product and $120 for each empty crate. These can be returned to the company’s retail exchange facility at 214 Spanish Town Road facility, the Montego Bay Distribution Centre and wholesales across the island.

Luis Prata, Managing Director, Red Stripe, noted, “We want this initiative to be an avenue of empowerment for many Jamaicans, both financially and morally. Consumers who participate in our bottle return programme will practise environmental consciousness  through recycling, which will ultimately reduce the number of glass bottles in our landfills. They will also contribute to many socioeconomic improvements including reduced emissions of greenhouse gases and lower incidents of pollution. In addition to these rewards, we wanted our consumers to earn a transactional benefit, and that is why we will continue to do refunds. Ideally, we want to create a paradigm-shift that will result in recycling retaining permanence in everyday life. Sustainability has been one of our foundational values, and in accordance with global standards concerning eco-friendly business practices, Red Stripe is committed to fulfilling our due diligence.”

Winkle understands his responsibility to the environment, and is consciously aware of the positive environmental impact of his business. Being the savvy entrepreneur that he is, Winkle drives to landfills to buy glass bottles and returns them to Red Stripe, noting that it is good for business and better for the environment.

He said, “All wah gwaan if wi nuh protect di environment den wi a guh lose it. We haffi make sure wi tek di recycling ting serious because it might seem simple to some people, but every one bokkle yuh tek up mek a difference.”