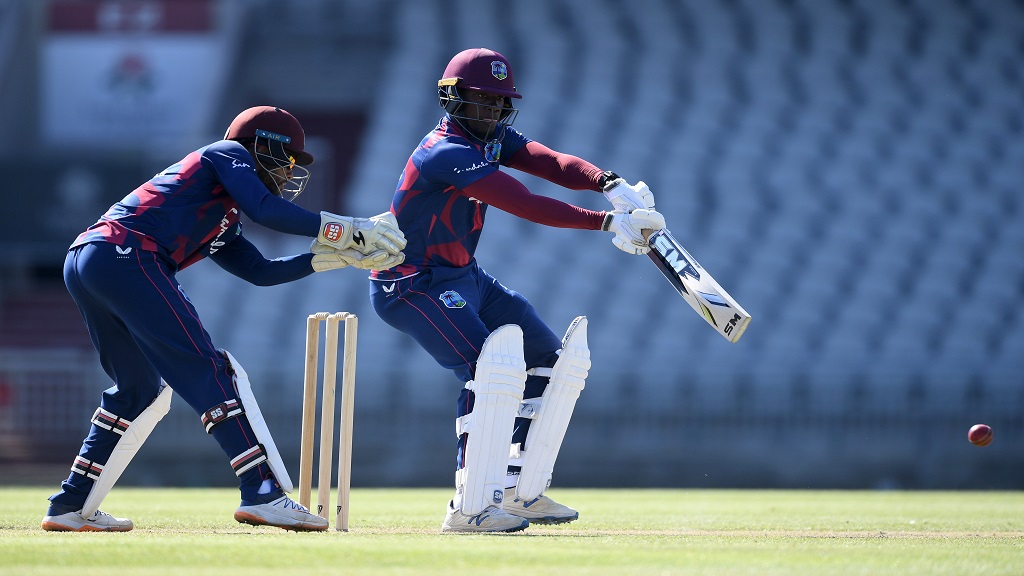 Nkrumah Bonner on the go during his patient 47 on the final day of the West Indies four-day intra-squad match at Emirates Old Trafford on Thursday, July 2, 2020. (PHOTO: Cricket West Indies).

Jamaican batsman Nkrumah Bonner was among the runs on Thursday as the West Indies four day intra-squad match ended in a draw at Emirates Old Trafford.

The right-handed middle-order batsman scored a patient 47 for the side led by Test captain Jason Holder.

The 31-year-old faced 114 balls and batted for over two hours hitting three fours and a six before he was caught by his countryman John Campbell off the bowling of Rahkeem Cornwall. Holder's side got up to 170 for four, against a team led by Kraigg Brathwaite, and a lead of 264 when an early finish was agreed.

Bonner, who is on his first Test tour with the West Indies, was happy for the time out in the middle ahead of the start of next week's first Test against England at the Ageas Bowl.

"It was nice being able to spend some time in the middle. We have been putting in a lot of work at practice, particularly in the nets so it was good to get a chance to bat under pressure," said Bonner.

Jermaine Blackwood, another Jamaican, was also among the runs. Hoping to earn a first Test start in nearly three years, Blackwood timed the ball nicely on his way to 43 from 48 balls, which was ended when he was bowled by Roston Chase's first delivery of the match.

But while Bonner and Blackwood got among the runs, it was not the same for Holder.

In a bid to get some time in the middle, Holder promoted himself to open the batting but he flopped, making just two off 15 balls. This means, the Test captain has made just seven runs and faced fewer than 30 balls in three innings across these two intra-squad matches ahead of next week's first Test.

Joshua Da Silva, who made a century in the first innings,  picked up where he left off, following up his unbeaten 133 with 56 not out as he took his tally in the match to 189 runs without dismissal.

Less than an hour of play was possible on the last morning because of overnight rain as Brathwaite's XI, advanced their overnight total from 112 for seven to 178 all out, with fast bowler Shannon Gabriel taking four for 42. That gave Holder's XI a first-innings lead of 94.

Stokes to captain England against West Indies with Root missing