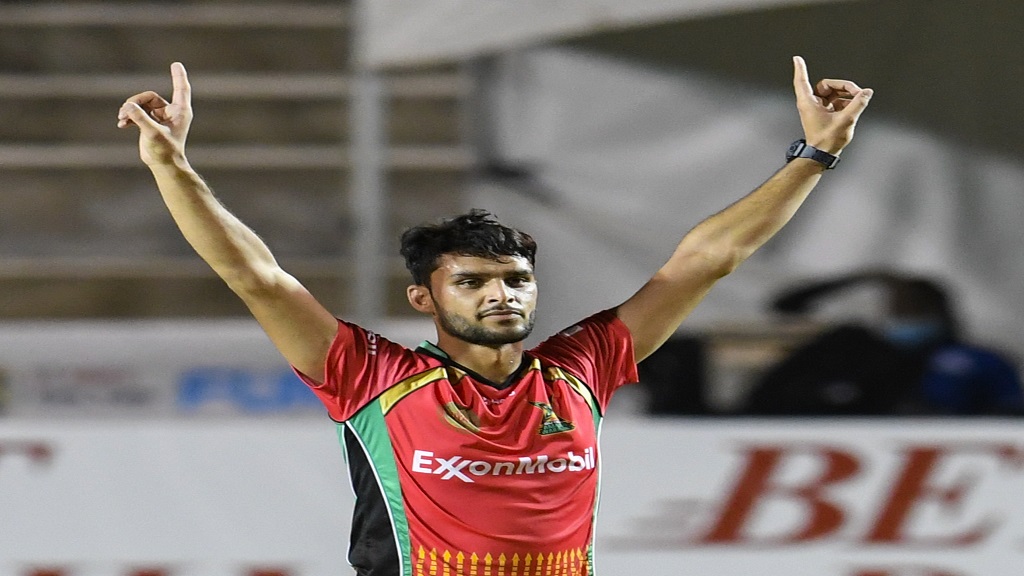 Guyana Amazon Warriors cruised to an eight-wicket victory over reigning champions Barbados Tridents in Match No. 22 of the 2020 Hero Caribbean Premier League (CPL) at the Brian Lara Cricket Academy, in Trinidad, on Tuesday night.

Naveen-ul-Haq picked up four wickets from his four overs - a  T20 record at the venue - as Barbados Tridents were blown away for 92 runs, and the Warriors replied with 93 for two to ease home with 20 balls to spare. The victory was the fourth of the season for the Warriors, which moved clear in third place.

The Tridents shuffled their batting order for the match.  Justin Greaves was drafted into the XI to open, but he lasted only one ball as he fell LBW trying to sweep Amazon Warriors captain Chris Green. Johnson Charles fell to a magnificent catch by Shimron Hetmyer, who sprinted 25 yards and dived full length, sending the bowler Kevin Sinclair into another athletic celebration.

Jason Holder had only himself to blame for being run out by T20 debutant Kissoondath Magram, meaning the openers and along with the captain had all fallen for 0 as the Tridents slumped to three runs for three wickets in 2.2 overs.

Shai Hope was shifted down to five but fell for another low score, chipping a catch back to Sinclair. He made five.

The Tridents  were nine for four in the fourth over, and added just five more runs before the end of the powerplay - the second lowest-scoring in CPL history. Green bowled out with another maiden, Sinclair’s last over went for just three, and the Tridents were 17 for four after eight overs.

More poor calling saw the Tridents losing their fifth wicket, as Jonathan Carter set off, was sent back by Kyle Mayers and was caught short of his ground by yards. He made five.

Mayers followed Carter back to the dugout two balls later top-edging a pull, keeper Nicholas Pooran taking a brilliant catch running towards the boundary to dismiss the batsman for 10.  At the halfway stage, the Tridents were a staggering 22 for six.

Imran Tahir’s second over was survived, but in the next over Naveen and the Amazon Warriors picked up two more. First, Ashley Nurse pulled straight to Romario Shepherd at deep square leg and was out for one, then Raymon Reifer, on one, looped the ball up to Pooran off his glove while playing forward, leaving the Tridents 27 for eight after 12.

Mitchell Santner finally hit the Tridents’ first boundaries, swinging Tahir for a six then straight driving for four. Santner then lofted Kissoondath Magram for six to take the Tridents past the lowest score in Hero CPL history - 53 all out back in 2013 by the Trinidad franchise. Rashid Khan slapped two sixes off Keemo Paul, but Rashid Khan for fell 19 trying to slice Naveen over the off-side, Sinclair taking a good catch at deep cover.

Naveen finished with a record four-wicket haul and the Tridents were 79 for nine off 18.

Hayden Walsh Jr slapped a four off Paul while Santner was run out off the last ball for a top score of 36 to ensure the Tridents had batted the whole innings.

Holder had two slips in place for his first over, a maiden to Brandon King. Santner got some drift, almost swing, with his arm-ball, but dropped short enough for King to crash a cut for four. Holder finally conceded his first run off his 11th ball via a Sinclair edge and Santner’s second went for just one.

Holder attacked with Rashid in the powerplay, and while the Afghan fired five wides, he beat Sinclair all ends up and knocked back his off-stump for three as the Warriors lost their first wicket in the fifth over with the score on 16.

Hetmyer was lucky to inside-edge for four past the stumps first ball, and to see a pull off Holder fall just short of Santner at mid-on, but King lofted the last ball of Holder’s over over long leg for a six to take the Amazon Warriors to 31 for one off the powerplay.

Hetmyer fell to Hayden Walsh for nine to continue his run of low scores, beaten through the gate, and with Pooran in early off the back of his brilliant century against the Patriots, Holder attacked with his wrist-spinners in tandem.

King was lucky to survive a wild swipe off Walsh, but the wrist-spin attack was just about seen off and King cashed in by cutting Ashley Nurse for four. At the halfway stage, the Amazon Warriors were 52 for two.

First ball after the break, King hammered a flat six off Holder and the over went for 10. Nurse was nudged around, but King had started to find his feet and whipped Rashid hard for four to take the Amazon Warriors to 72 for two off 13.

King took his score to 40 and his strike rate over 100 with an inventive flick off the stumps over short fine leg for four, and Santner was milked for six to take the required runs under double figures.

Walsh dropped a tough diving catch to deny Rashid a second wicket, but King was able to bring up his first 50 of the season with the score-levelling stroke. Pooran nudged the run that confirmed a win that hadn’t looked in doubt for the majority of the 36.4 overs bowled.