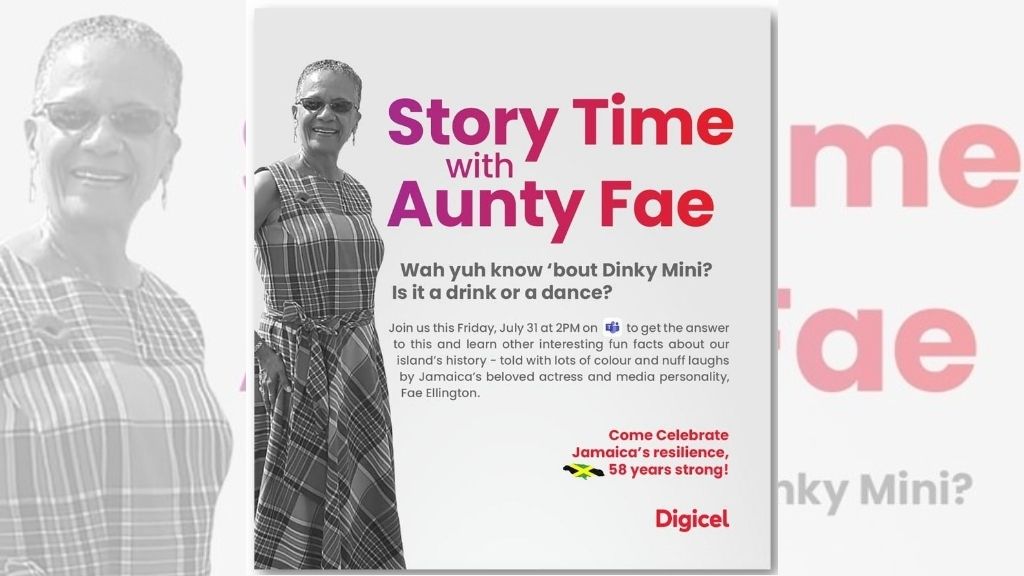 Jamaica is set to celebrate her 58th year of Independence on Thursday, and, to commemorate this, Loop Lifestyle shares notes from a recent chat with the extraordinary Fae Ellington.

In the recent virtual story time with Ellington, close to 180 Digicel employees watched as she recounted Jamaican history with earfuls of anecdotal references.

‘Wah yuh know ‘bout Dinky Mini? Is it a drink or a dance?’ the promotional image teased.

Well, the beloved ‘Aunty Fae’ had the answers and wasted no time going down memory lane as the viewership increased.

Indeed, it was much more than fables and regalia; the wit, charm, and expert knowledge delivered by the media icon and lecturer was well-received.

It was so entertaining, we had to share some of the myths debunked, trivia revealed, and reminders of who we are and where we come from.

What did Sammy plant?

The origins of Obeah

Some Jamaicans believe in and practice obeah and some don't. ‘Belief kills and belief cures’, Ellington warned before tracing the origins of Obeah back to Africa.

She also mentioned that Obeah is among the myriad spiritual practices that crossed the Atlantic with Africans during the slave trade.

Revivalism is another such practice that travelled across the Atlantic. However, the two are not identical.

Traditionally, as Ellington suggested, if one decides to set a table for revivalism, items laid out on the table – that are, in many cases, presented as an offering – typically includes bread, water, croton (or variations of flowers), and candles.

Rum and Fowl blood do what?

White rum and fowl (chicken) blood, when poured or sprinkled in the four corners of a new home or plot of land is one of many practices believed to ward off evil spirits and prepare the space for living.

The late Professor Rex Nettleford lobbied for an official celebration of Emancipation Day during a six-year campaign.

This campaign resulted in the reinstatement of the holiday by Prime Minister PJ Patterson in 1998.

When Jamaica gained independence from Britain in 1962, Emancipation Day celebrations were not yet declared an official national holiday.

But, for Jamaicans of African descent, Emancipation Day is a very important date in history as it represents a time when their forefathers were ‘freed’ from the shackles of chattel slavery.

How do you take your rum?

Kulu Kulu rum is the ‘decent name’, according to Ellington, of the unpopular ‘John Crow Batty’ rum.

Dukunu, Blue Draws, and, what else?

Though in other Caribbean countries, it bears several other names, the pastry many know as ‘Blue Draws’ has been referred to by two other names locally: dukunu and tie-a-leaf (tie-leaf, shortened most recently).

Did you know circa 1900, Liguanea Plain in St Andrew, where the Emancipation Park now stands, was Knutsford Boulevard?

The area was once a race track, along the ‘long stretch of land from Knutsford Boulevard to Oxford Road being developed as the Knutsford Park Race Course where horseracing and polo matches were held…’ according to an excerpt from Jamaica, the Land of Film by Peter Polack.

Caymanas Park in St Catherine became the next major racecourse.

When you’re ready to leave, you say ‘mi turn mi back’ instead of ‘mi gone’, as ‘gone’ is likened to passing away or death.

The typical, truly Jamaican response to this remark is ‘Walk good and may good duppy walk with you,’ or ‘walk good and tell them other one howdy do’.

Fae Ellington is the new host of Profile

School of Drama's 'The Listeners' to close Rex Nettleford Conference