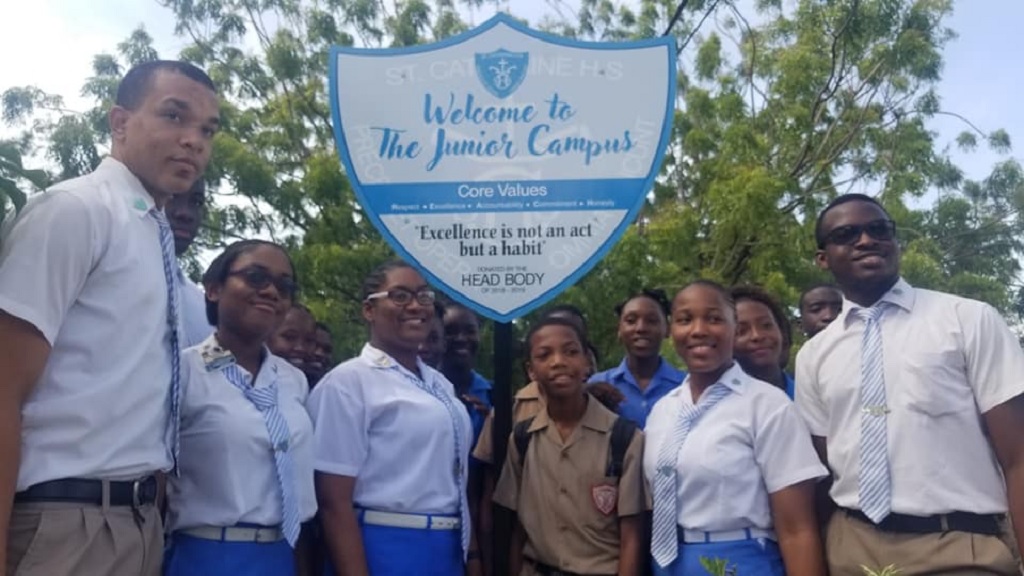 After a long hiatus, your favourite series School Daze is back!

What better way to reintroduce the series than by featuring the school that was attended by the prime minister and his wife.

With colours blue and white, which are embedded in the words of the school song, ‘Dear St Catherine High’, the school has produced many outstanding Jamaicans who have contributed to national development.

Prime Minister Andrew Holness and his wife Juliet, as well as, Archbishop of Jamaica, Kenneth Richards, are amongst the most notable past students. Graduates have also made marks in sports, entertainment, academia and a myriad of other fields.

With a student population of more 2,500 students, St Catherine High is one of the largest schools in the Caribbean and sits on vast land in the island’s old capital, where many partnerships and fond memories were formed.

School Daze garnered from current and past students some of the things you’d know only if you attended St Catherine High School.

1.  A Catholic institution, the school was started by Sister Mary Mercedes Doorly and Father Mathew Ashe in 1948 and has remained under the guidance of the Catholic church, with students still having to “bless themselves” by making the sign of the cross, while saying “in the name of the Father, Son and Holy Spirit”.

2. Grotto and butter or quarter bread and either butter or corn beef were staples for many students in the olden days, especially boys. The trick was, many had to go through holes in the fence or climb over to reach the sellers, including the famous Cooper. He was so intrinsic, that the school later made him an official seller on the compound. He recently retired, after years of unofficial and official service.

3. Only girls attended until 1971 when the school’s legendary principal, Sister Mary Paschal Figueroa, made the co-educational change on the request of the Ministry of Education.

4. Red and white uniforms and jippi jappa hats were worn at one stage by girls.

5.Ties were worn by all boys until the late 1980s when the boys from Grade 7 to Grade 11 started wearing crests, allowing only the Sixth Form boys and girls to wear ties.

6. Avila, Orleans, Paschal, Lourdes, Mercedes and Goretti are the names of the houses that are all named after Catholic Saints and Sisters, who were past principals.

7. Reggie was Mr Everything. Many graduated from the institution without knowing his birth name, Barrington Scarlett, but he was a fixture that wasn’t easy to forget. From the neighbouring community, Reggie, with his tobacco pipe, was so involved in school life that he was given work to roll the cricket pitch until he was elevated at one stage, to coach the team. But it wasn’t only cricket, it was football, basketball, rugby and netball. Reggie was involved in everything.

8. Get off the streets in uniform by 5pm was a standard that was set by Sister Mary Paschal and had consequences, if not obeyed. There was also no eating on the streets and don’t go to the market and places of commerce while in uniforms. And yes, the girls at the time said Sister Paschal, other nuns and teachers, would patrol the streets of the old capital to enforce the rules. These rules no longer exist.

9. Rugby is synonymous with St Catherine High. The school has won the most titles in the sport with many of the players going on to represent the island.

10. Sister Mary Paschal is a legend at the institution. Sisters, teachers, students, all, revere her name. It is hard not to know about Sister Paschal once the school is entered, as the main hall is situated at the front of the school and bears her name. Although resigning as principal as far back as 1980, she was still exalted up to the time of her death on April 19 and even now.

11. Miss Joan was an ancillary member that gives students a lot of lip. Incidentally, it would have been believed that since she peddled June Plum and salt under the steps of the chemistry lab, she would have “suck up” to these students, who were her main customers. No, not the feisty Miss Joan.

12. Performing arts is a culture. It is taken very seriously. Students’ special talents are honed with participation in many of the JCDC’s annual competitions. So, while the choir is amongst the best in the island, artistic individuals are harnessed and churned out consistently. To name a few, gospel artiste Jermaine Edwards, dancehall stalwarts Spice, D’Angel, Mr G (Goofy), Chico, Red Foxx and 1980s standout Shinehead. It goes even further, as conscious reggae crooner, Chronixx is also a past student, as well as opera singer Carline Waugh and Hugh Douse and many of his Nexus Performing Arts Group. St Catherine has also produced Broadway performers, Hollywood actors and many others in the various performing arts fields.

13. Siberia and Gun Court were once monikers of classrooms and for one reason or another, they seemed to have attracted the classes that gave the most trouble.

14. Mr Neale’s three claps were a signal that something was amiss. It was also a signal to “hands up” or to take flight. Doing the latter might be an exercise in futility as, for some reason, Mr Kenneth Neale knew the names of almost all the students enrolled. Truth is, if he desires and catches up with the offending student(s), it might only be a rap session as he is quite aware of young people’s antics or might be an invitation to join the school choir. And yes, he turned many “gangsters” into choirboys.

15. Skipping the line was an art form. With the population of the school that large, the lunch hour for junior school (Grades 7-9) and that for senior school (Grades 10-13) was just not adequate. Many of the teachers after lunch were also strict with time. That forced students to find creative ways of skipping the line and getting to the line, which means a race to the canteen at the sound of the lunch bell. No kidding, it could mean a matter of being able to go home directly after school or having to stay back to serve detention.

16. Alligator Pond was once another famous place on the premises. It was a scarcely used area with trees that was used for many different activities, including “skulling” class.

17. Midday Meditation was once an organised event for Christians (and non-Christians). Hundreds would gather to pray under the big tree at Alligator Pond. Many had to skip lunch for this or had to ask someone, who had space in the line, to buy it.

18. Goats and more goats, which meant that most students knew the entire life cycle of goats because they were somehow always on the compound. Well, that was before the now secured walls.

19. Three different addresses have been associated with St Catherine High. The school was first located where St Catherine Primary is situated now. It then moved to the Mercy Convent at Brunswick Street, which is now St Catherine Preparatory. It now rests on vast land at 35 St John’s Road.

20. There is a gate on Old Harbour Road and one on St John’s Road. Yes, the school now has two entrances. The vastness of the land space means that the Old Habour Road entrance serves the junior school campus and the one on St John’s Road serves the senior school campus. But both entrances were used by all until the Old Harbour Road entrance was “ordered locked” in the 1990s.

21. Principal Mr Marlon Campbell is ‘Grung God’. Being able to scrutinise the premises and know what is happening is a talent not many principals possess. Principal Campbell, the first male principal, is so good, that students call him ‘Grung (ground) God’.

22. Once prominent in Schools’ Challenge Quiz and made the final of the competition in 1988, losing to neighbours St Jago High School in the battle of Spanish Town.

23. Teachers used to ride bicycles to classes because of the size of the premises.

25. Colour crests serve to separate the first to fifth form students. The crests have five colours with each serving a particular year group. When the students of one colour crest graduate, that colour goes back to the first form.

26. Chubby the school bus caused many teams and other students to be late for many engagements. Breaking down on the road was a familiar sight, with the management of the teams having to make alternative plans to arrive at their respective destinations.

23 things you'd know only if you went to Kingston College

14 things you'd know only if you went to STATHS