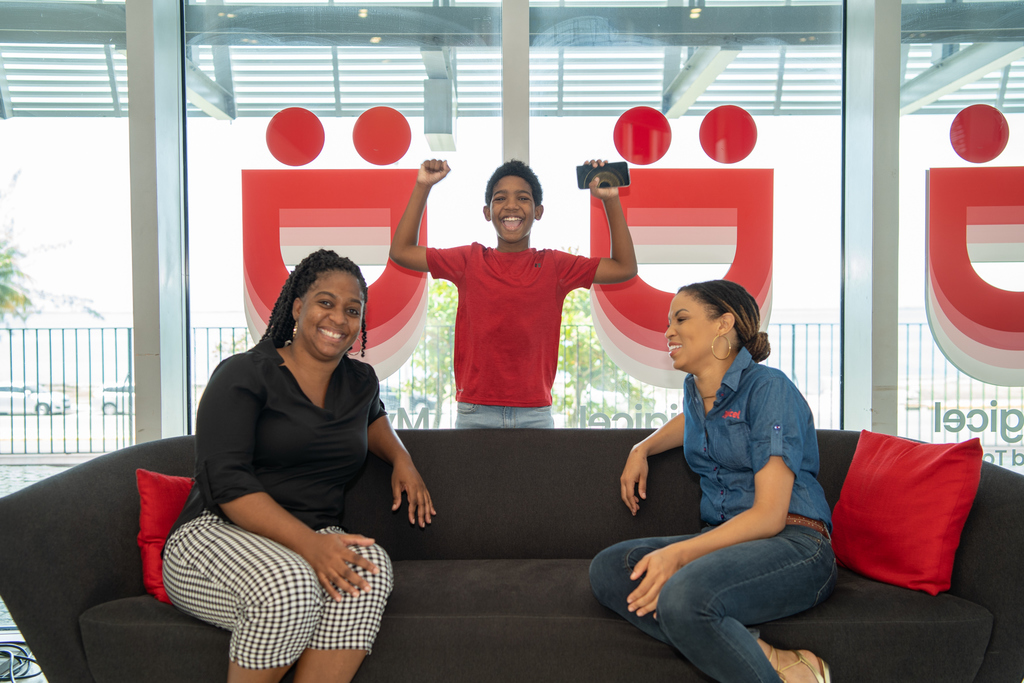 Eleven-year-old millionaire D’Jaughn Brown pumps his fists in excitement in response to being named winner of the weekly grand prize of $1 million + $200,000 to charity in the Digicel Shake Win and Donate promotion. Sharing the moment is his mom, Sandrina Davis (left), and Digicel Jamaica Brand Marketing Manager, Ayanna Kirton.

Jamaica’s newest millionaires are also among the nation’s youngest – 11-year-old D’Jaughn Brown and 15-year-old, Kimberly Thompson. Both are among the latest winners of the Digicel Shake to Win and Donate promotion.

D’Jaughn tells an interesting story about how he found out he had won the $1 million for himself and $200,000 towards charity shortly after mentioning the promotion during a phone call to his aunt overseas.

With the memory still fresh in his mind after the call, D’Jaughn tapped on the MyDigicel app and shook his phone. To his surprise, the boy who hails from Old Harbour St Catherine, was the million-dollar winner, but his mom, Sandrina Davis, was a bit skeptical. Convinced that he was indeed $1 million richer the avid video gamer waited until the next business day to receive that all-important confirmation call from Digicel.

A confident D’Jaughn reflected, “I was surprised, but I believed I had won, so I was just waiting on the call from the Digicel agent.”

Long-term investments, acquiring a new laptop and possibly a video game are part of the plans for D’Jaughn’s million. He’ll donate the $200,000 to the St Patrick’s Foundation.

Explaining his decision, he said, “I chose them because I saw they really needed the money, my mom worked there up until last year and I knew they need help.”

For 15-year old Kimberly Thompson, her $200,000 donation will go to the Blossom Gardens Children’s Home in Montego Bay.

“I wanted to give something to children and this is the only home I know about that is near to where I live, so I chose to donate to them,” she explained.

As for her $1 million, Kimberly, who intends to become a real estate entrepreneur, is already making big plans.

“I plan to invest in stocks and put away some in an account. I also want to help my mom and buy some appliances for the house.” She added, “My mother is a cook at a school, however, due to COVID-19, she is no longer working, so I want to help her out a bit.”

On winning, Kimberly recalled, “I never expected to win, I just added a seven-day Nuff Data plan in the MyDigicel app. It told me to shake. I did and I saw where it said I had won. I was so overwhelmed, I never believed it was true, so I asked my sister to check it out for me.” Thompson, who hails from Success in Hanover, was further convinced after receiving a confirmation call from a Digicel agent.

Over in Rock Spring, Trelawny, Sandra Samuels-O’Connor, a mother of four children and entrepreneur, also won the big prize. Her youngest son who uses her phone for online school, was the one who notified her that she had won.

Samuels-O’Connor plans to use her winnings to boost her trucking business which she says has suffered somewhat due to COVID-19.

She remarked, “This will be of great help in terms of even boosting the business which requires constant maintenance of the trucks due to wear and tear.”

She has donated her $200,000 charitable portion of the winnings to the SOS Children’s Village in St. James.

“I was thinking since we are in Child Month I saw it fitting to donate to a charity that deals with children. I once lived near the home in Barrett Town St. James and used to pass there on my way to home.”

Brand Marketing Manager for Digicel, Ayana Kirton commented, “We just love the opportunity to spread love to our customers from all around the island, and to assist persons from different backgrounds and age groups, this week we have two young millionaires, and this just speaks to the fact that there is a chance for any of our customers to Shake and indeed win in this promotion.”

Every Digicel prepaid and postpaid customer can download the MyDigicel app and get a chance to win the weekly grand prize of $1 million. Now with a ‘Shake to Win & Donate’ twist, all grand prize winners will get an additional $200,000 that will go towards a registered charity of their choice.

To enter, prepaid customers must purchase a plan for $300 or more in the MyDigicel app.

They’ll also receive 25 per cent bonus data seven-day or longer plans. Postpaid customers need only to keep their accounts active by paying their bills on time and in full in order to Shake to Win. Add-ons including data, international minutes give customers even more chances to win.