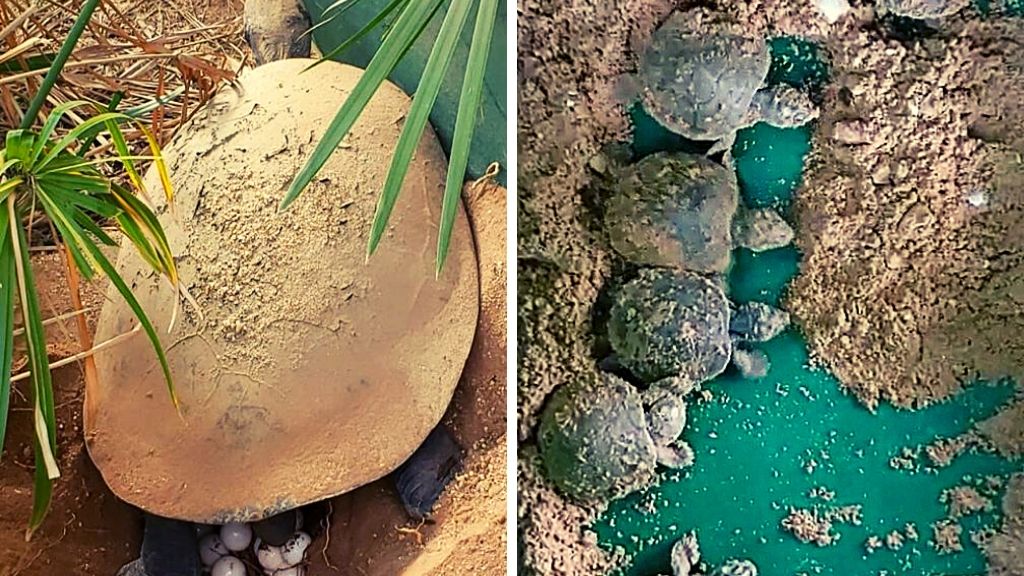 A 100-year-old South American river turtle who laid eggs during the coronavirus shutdown now has  18 hatchlings at the Emperor Valley Zoo.

Coincidentally, the news was announced on World Environment Day, celebrated on June 5 every year.

Minister of Agriculture, Land and Fisheries, Clarence Rambharat, said the event is an auspicious one.

"It’s a signal made clear by COVID 19. As our planet develops at unprecedented speed, we must care for nature. Just over two months ago the Zoo announced the turtle laid eggs on land within its enclosure instead of the pond it had previously laid."

"The Zoo felt this was due to the closure of the facility in mid-March and the comfort the turtle may have felt in venturing out the pond and onto the sandy area to deposit the eggs."

"The hatching today is excellent news and demonstrates the importance on World Environment Day of striking the balance between human activity and care for nature. As UN Secretary General António Guterres says in his 2020 message, to care for humanity we must care for nature."

The turtle laid the eggs in April 2020 while the Zoo was closed during the coronavirus lockdown. Zoological officers believe that with less foot traffic, the turtle felt comfortable enough to finally make a burrow on land and lay her eggs.

Zoological officer Sharlene Khan said the the South American river turtle is one of the largest freshwater turtle species in the world and has had a place at the Zoo since it first opened its doors to the public in 1952.

The South American river turtle is listed as Conservation Dependant by the International Union for Conservation of Nature (IUCN), meaning that its survival is dependant on conservation efforts to prevent it from becoming threatened with extinction.

The theme for World Environment Day 2020 is 'Time for Nature' and calls on the public to care for nature in order to preserve the future.

About the South American river Turtle

The giant South American river turtle is one of the largest freshwater turtles in the world.

They are highly aquatic; typically, the females only leave the water to bask and lay 50–150 eggs at communal nesting sites during the dry season.

They eat primarily fallen fruits and seeds. Other items in their diet include vegetation, aquatic invertebrates, and insects.

Females can have shells longer than 30 inches and weigh up to 200 pounds. Males are considerably smaller, with a shell length of about 19 inches. Hatchlings are about 2 inches long.

These turtles live in the Orinoco and Amazon river systems; the nesting range has been greatly reduced due to over-harvesting of eggs and hatchlings.

Once abundant, populations have declined dramatically as a result of poaching of females, collection of eggs, and habitat loss.

This species is listed in Appendix II (threatened in some parts of its range) of the Convention on International Trade in Endangered Species (CITES) and is listed as endangered by the U.S. Fish and Wildlife Service.

While hatchlings are preyed upon by a number of animals, especially black vultures, the massive size of adults protects them from most predators. Humans are primarily responsible for this species’ decline. In the “heyday” of turtle harvesting, an estimated 48 million eggs were taken each year.