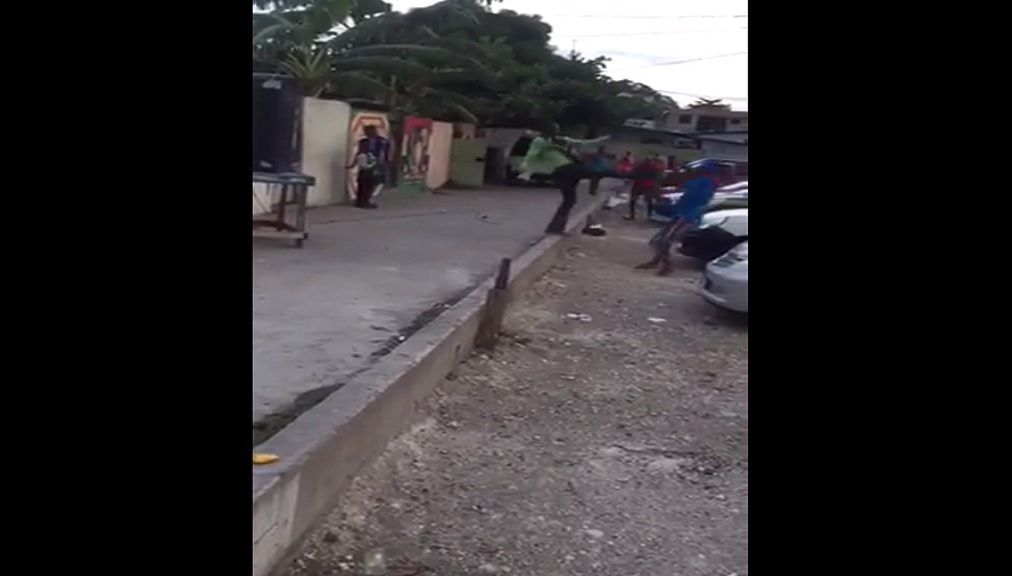 It is no secret that followers of the Christian faith and members of the Rastafarian community do not see eye to eye on a number of issues.

In many cases, the differences in opinion have led to a lot of heated debates on religion, but not very often do these arguments end up in physical confrontations.

But in one such incident, in the South St Andrew community of Arnett Gardens (popularly known as 'Jungle'), a pastor was in the middle of a spirited presentation in which he was beseeching Satan to “Hold yuh position”, when a Rasta man suddenly enters the fray and within just seconds, the two were engaged in an all-out brawl.

A 20-second video of the incident, the shorter version of what has been circulating on social media, shows the pastor and the dread in close physical combat, with the minister coming out the clear winner of the unusual clash.

The video shows the pastor being approached by the man wearing dreadlocks, who is seen throwing a liquid substance at the preacher.

Instinctively, the pastor reacted in a manner that left persons in the area in shock, as instead of turning the other cheek as is mentioned in the bible, the pastor went into a Kung Fu mode, kicking at the Rasta man.

Thereafter, the community witnessed both men throwing blows and physically grappling with each other, including rolling on the ground.

The incident has generated mixed views from social media users who have commented on the video.

“I am really disappointed with how the pastor reacted to this situation. He could have acted in a more professional manner. How he acted does not represent how members of the Christian faith should act,” said one social media user who identified himself as ‘John’.

But another user saw nothing wrong with how the man of the cloth acted.

“What we are seeing here is just a sign of the times, where bothers are fighting against each other,” said another user.

Meanwhile, a senior officer from the Kingston Western Police Division, in which the Arnett Gardens community falls, confirmed that they have seen the video, but disclosed that no report was made of the incident.

Rastafarians accuse cops of abusing one of their elders

'Dem is no Rasta': Auntie has 'no regrets' over trimming of boys

Ashanti celebrates fabulous 40 in Antigua; did she disturb the peace?

Swansea residents forced to cope with days of murky floodwater