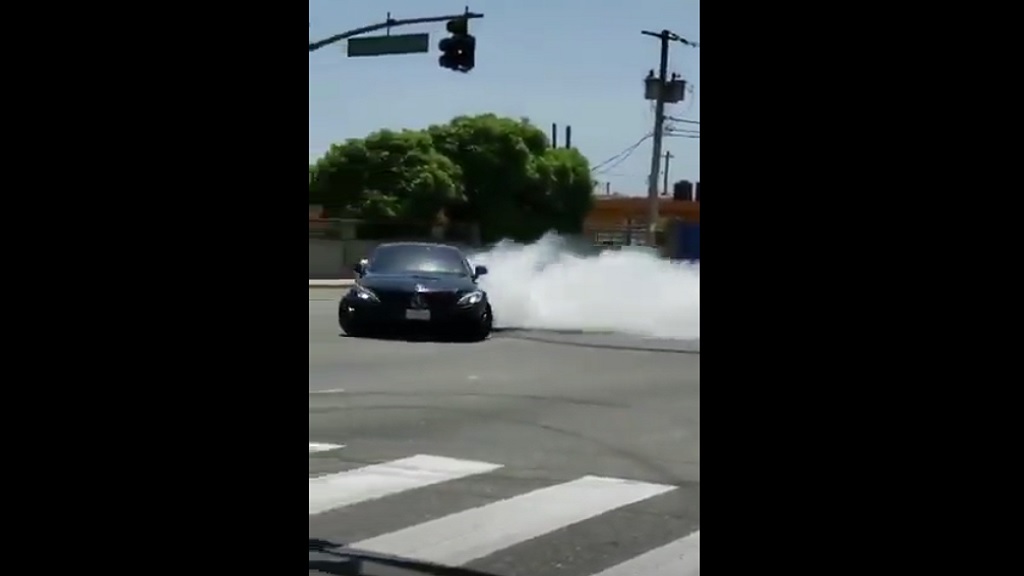 A screen grab from a video of stunting by a motorist at a Corporate Area intersection.

A driver who thought it appropriate to perform a daring and dangerous stunt at a busy Corporate Area intersection has been instructed by the police to turn himself in.

A video of the stunt has been circulating on Twitter, and the Jamaica Constabulary Force (JCF) responded on Saturday after a user of the social media platform brought it to the police’s attention by tagging the force.

In the 21-second video, the motorcar can be seen spinning wildly in the intersection and nearly colliding with an oncoming van. Only the sheer experience and composure of the van driver seemingly prevented the collision.

The car continues to be spun in the intersection, generating huge rings of smoke from its burning tyres, before it is finally driven from the scene.

While not revealing when or where the incident happened, the JCF tweeted: "Assistant Commissioner of Police in charge of the Public Safety & Traffic Enforcement Branch is leading the investigation in this matter. Several breaches of the Road Traffic Act have been identified. The driver is required to turn himself in to the police by 4:00 p.m. on Monday, August 19."

The act by the driver and the subsequent response by the police force have sparked various perspectives from Twitter users. Some have condemned the driver for his "endangerment of other motorists", while others have taken issue with the JCF for not locating the driver, instead of requesting him to turn himself over to them.

"Why is the suspect being asked to turn him or herself in? Freeze frame, zoom in on the licence plate, pull the records, get a warrant and seize the car as evidence," a male tweeted.

Another Twitter user was in agreement with that position.

"I too question the rationale of asking the perp to turn themselves in. In any other crime-intolerant jurisdiction, the sheer evidence alone brings the police to the offender," the tweet said.

One user of the social media platform, however, had this to say to the JCF: "Stop waste your time, go look fi gunman and tief. Idle unu idle. Come lock me up when I'm doing a burnout nuh. Kmt."

His tweet was not taken to kindly by one user, who replied: "If that same car crashed into someone you cared about (while) doing that foolishness, you would not speak the way you do. That’s reckless driving and it must never be tolerated."

One Twitter user, who said she lived in the area where the incident occurred (though not indicating the location), said she was tired of hearing such vehicle noises, especially at nights.

"And he (the driver) thinks this is funny? I live in the area and I'm tired of hearing the drag racing sounds in the middle of the night. I guess he's a customer at that annoying garage on Dunrobin Avenue that revs cars all night," the female tweeted.

A man took the position of several other persons who gave their opinion in calling for the suspension of the driver's licence.

"Suspend his licence for ‘a two years’. Twelve months of community service. And force him to re-sit the driver’s exam before being allowed back on the roads," his tweet said.