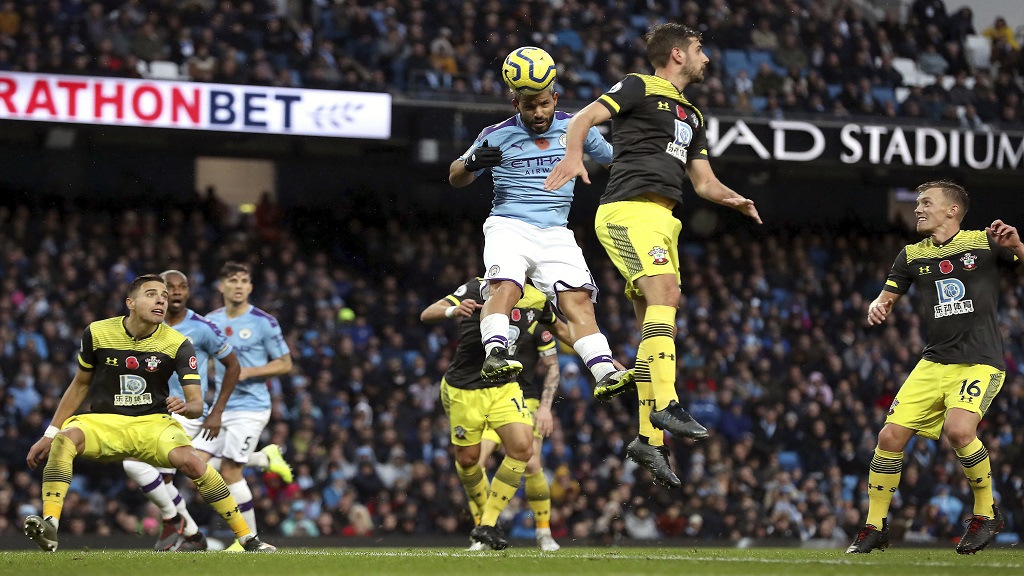 Manchester City left it late to win. Liverpool left it even later.

The two teams leading the English Premier League (EPL) each staged late comebacks to win 2-1 against unfavored opponents on Saturday. The gap between leader Liverpool and second-placed City stayed at six points, but only after some late drama.

For City, the hero was Kyle Walker, setting up one goal and scoring the winner against Southampton in the 86th minute.

For Liverpool, it was Sadio Mane with an assist for Andy Robertson in the 87th and a winning header against Aston Villa deep into stoppage time.

Before Southampton and Aston Villa had their dreams of a surprise win crushed, Bournemouth celebrated a 1-0 victory over a diminished Manchester United.

Liverpool's players knew how close they came to losing their status as the only unbeaten team in the league, but they kept fighting.

Robertson said his team's job was to force errors from Villa all the way to the final whistle. His charging run to the far post to meet Mane's cross certainly wrongfooted Villa's defense.

"We want to keep going, we want to win every match," Robertson said. "If we do that or not, that's another thing. We know we've got so many tough games ahead."

Only one team has won the league unbeaten — Arsenal in 2004.

VAR checks declared Villa's Mahmoud "Trezeguet" Hassan onside for the opening goal, but ruled Roberto Firmino's armpit was marginally offside when he put the ball into the net for Liverpool shortly after.

City had little trouble beating Southampton 3-1 in the League Cup on Tuesday, but Saturday was a very different proposition.

When Ederson spilled the ball while saving Stuart Armstrong's shot in the 13th, James Ward-Prowse was waiting to pounce.

Southampton were organized in defense in vast contrast to their 9-0 capitulation to Leicester eight days before, and held City at bay until Walker and Aguero combined to score two vital goals.

Manchester United not good enough to get a draw at Bournemouth? A few years, ago that would have sounded ridiculous.

Yet, it was United manager Ole Gunnar Solskjaer who said "it was the lack of quality that couldn't give us the point or three" in heavy rain on England's south coast.

Joshua King, a former United youth player, scored the only goal of the game in the 45th minute, turning and shooting as United's star summer signing Aaron Wan-Bissaka did little to stop him.

Arsenal and Wolverhampton Wanderers drew 1-1 after Raul Jimenez scored for Wolves in the 76th to even out Pierre-Emerick Aubameyang's earlier goal for Arsenal. The Gunners have conceded in each of their last five games in all competitions.

Elsewhere, Sheffield United earned their biggest win since returning to the league, beating Burnley 3-0 to rise to third in the table, thanks to two goals from John Lundstram. Sheffield is unbeaten in their last four games.

After strong early season form, West Ham's slide continued with a 3-2 loss to Newcastle, their sixth game without a win, while Brighton returned to the top half of the table with a 2-0 win over Norwich.