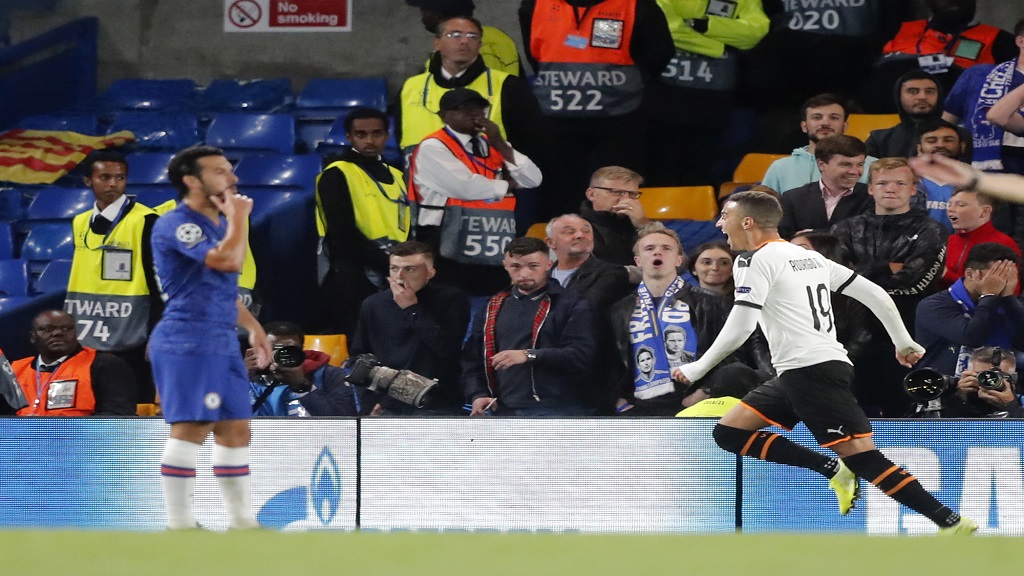 Rodrigo allowed Valencia to shake off a week of upheaval behind the scenes to clinch a 1-0 victory at Chelsea in the Champions League on Tuesday.

The opening victory in Group H came in only the second game in charge for Albert Celades since replacing Marcelino García Toral, who fell out with owner Peter Lim.

"This was a very hard-fought win," Celades said through a translator. "The players showed a lot of commitment toward not just us the coaching staff but also to the club and fans."

The winning goal came from a player that Valencia nearly sold to Atletico Madrid in the summer transfer window. Rodrigo was left unchecked to race onto Daniel Parejo's free-kick and volley into the net in the 74th minute at Stamford Bridge.

"I never felt alone, I always felt the players support," said Celades, a former defensive midfielder for Barcelona and Real Madrid. "We have to make sure the noise outside doesn't affect us and work on things that will help us win matches."

Chelsea, meanwhile, have to work on their defense.

Rodrigo's strike was the 14th goal Chelsea have conceded in the seven games in all competitions since Frank Lampard took charge of the club he won the Champions League with as a player in 2012.

Chelsea fans were given a reason to cheer minutes after conceding when a penalty was awarded after a VAR review saw referee Cüneyt Çakir go over to the pitchside screen to verify that Fikayo Tomori's header hit the hand of Daniel Wass.

But it was not usual penalty taker Jorginho or Willian who took the spot-kick. After a conversation with Willian, Ross Barkley pointed to his chest before going up to the spot.

And those earlier celebrations were short-lived as Barkley's kick clipped the crossbar and flew over.

"I wanted to take it," Willian said. "But he was confident to take it. It is football and he missed the penalty."

Lampard sought to downplay any issues within the team over the penalty taker, saying Barkley assumed the role when he came off the bench.

"I don't know what the conversation was," Lampard said, "but Jorginho and Willian were penalty takers until Ross came on the pitch."

Chelsea had an early blow when midfielder Mason Mount limped off with an ankle injury only 15 minutes into his Champions League debut, having initially played on after former Arsenal midfielder Francis Coquelin launched his left foot at the midfielder's right shin.

"It was a shame," Lampard said. "He's been playing well and he started this game well."

Mount was replaced by Pedro Rodríguez, with American summer signing Christian Pulisic overlooked by Lampard and not making it of the bench for a second straight game.

In the other game in Group H, last season's semifinalist Ajax beat Lille 3-0.