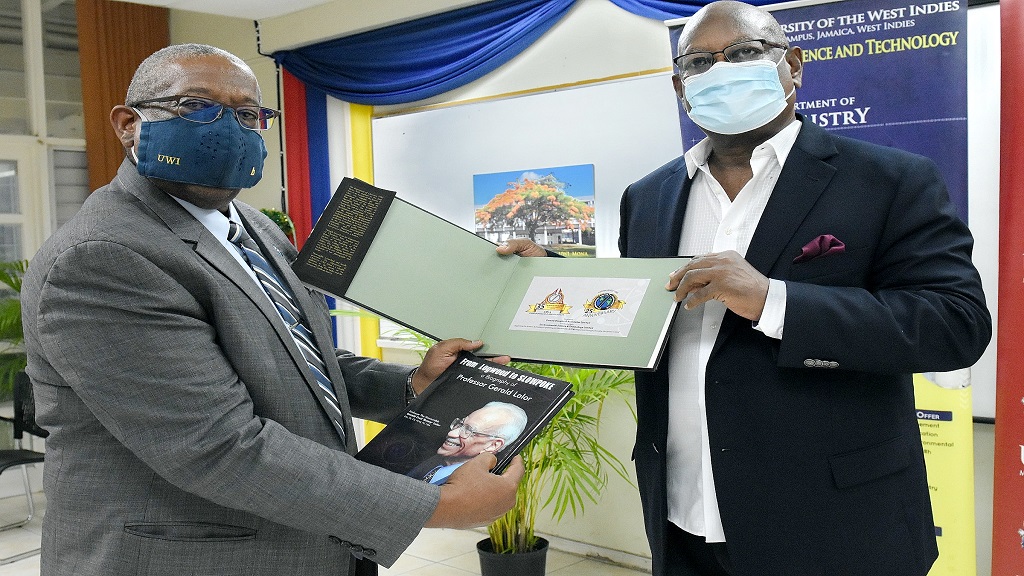 More than $1.6 million will be injected into the Department of Chemistry's Scholarship and Awards Fund at The University of the West Indies, Mona, following contributions from a distinguished alumnus and several companies.

The contributions were made through large purchases of two special publications, “The Department of Chemistry”, “UWI, Mona and “From Logwood to Slowpoke: a Biography of Professor Gerald Lalor”.

Among the contributors were Dr Conrad Douglas, personally, along with his companies: Conrad Douglas & Associates Limited and its subsidiary Environmental Science & Technology Ltd.

He made the presentation in a brief ceremony on Tuesday, September 15, 2020 in the Chemistry Department.

The companies, purchased 400 copies of the book – “The Department of Chemistry, UWI, Mona”, co-authored by Professors Kenneth Magnus and Robert Lancashire, to mark their 35th and 25th anniversaries, respectively.

Proceeds of the sale ($400,000.00) will go towards the Department of Chemistry’s Scholarship and Awards Fund.

“The Department of Chemistry, UWI, Mona” is a book published in 2010 which documents the history of the Department. Dr Douglas also made a personal contribution of US$2,000.

Douglas stated this philanthropy was a part of his company’s anniversary celebrations, he simply wanted to give back to the institution and the department that has given him so much, stating that The Department of Chemistry has made a world of difference in many of its graduates’ careers, as well as their professional and business endeavors.

“There are now thousands of us who are beneficiaries of this great institution and we are now conducting a lot of work throughout the society in the public and private sector organizations locally, the region and the world at large. It is only appropriate that we recognize and continue to participate in this life long process of trying to pave the way for those who will follow after us,” Douglas said.

Speaking at the ceremony, Professor Dale Webber, Pro Vice-Chancellor and Principal of The UWI Mona Campus thanked Douglas for his kind overture stating that it will help many students reach their goals.

The contribution he said "embodies our Triple A Strategy of Access, Alignment and Agility, by creating an opportunity for a student to access education, a Chemistry education, who would not have been able to afford it otherwise.”

He commended Dr Douglas for paying it forward and creating a legacy, instead of completing his education and walking away.

In the same spirit of generosity, all sales from the recently published book (2020), “From Logwood to Slowpoke: a Biography of Professor Gerald Lalor” by Dr Douglas and Professor Robert Lancashire, will be directed to Chemistry and, more generally, to student scholarships and other development activities of The University of the West Indies.

Lalor was the former Director General of the International Centre for Environmental and Nuclear Sciences (ICENS), former Principal of The UWI Mona Campus as well as the first West Indian head of the Chemistry Department.

“From Logwood to Slowpoke” examines the professional growth of Professor Lalor and his signal contribution to the development of science in Jamaica and the region.

Dennis Lalor, Chairman and CEO of ICWI, and his son Paul Lalor, President of ICWI, sponsored the publication of “From Logwood to Slowpoke”.

Copies have been purchased by other friends of the Department to include New Fortress Energy, Noranda Bauxite and ICENS to the tune of more than $800,000. Total sales of the” From Logwood to Slowpoke” to date is in excess of $1.4 million and there are several other commitments for purchase of the biography.

The National Foundation for the Development of Science and Technology (NFDST) has also purchased 100 copies of the Gerald Lalor book in support of the Government of Jamaica’s (GoJ) STEM initiative. According to the NFDST, both sets of books will be distributed, through the offices of the National Commission on Science and Technology, to educational institutions (tertiary, secondary and primary) and libraries across the island in promotion of the Government of Jamaica's STEM initiative.

Dr Minott Kates announced, in her concluding statement, that through The Department of Chemistry's Scholarship and Awards Fund, a number of other bursaries will shortly be established including one in honour of Dr Conrad Douglas, who is also a former President of the Chemistry Department Alumni Association, CHEMSAF.