'Too many taxis, nowhere to park': JGRA moves for safer gas stations 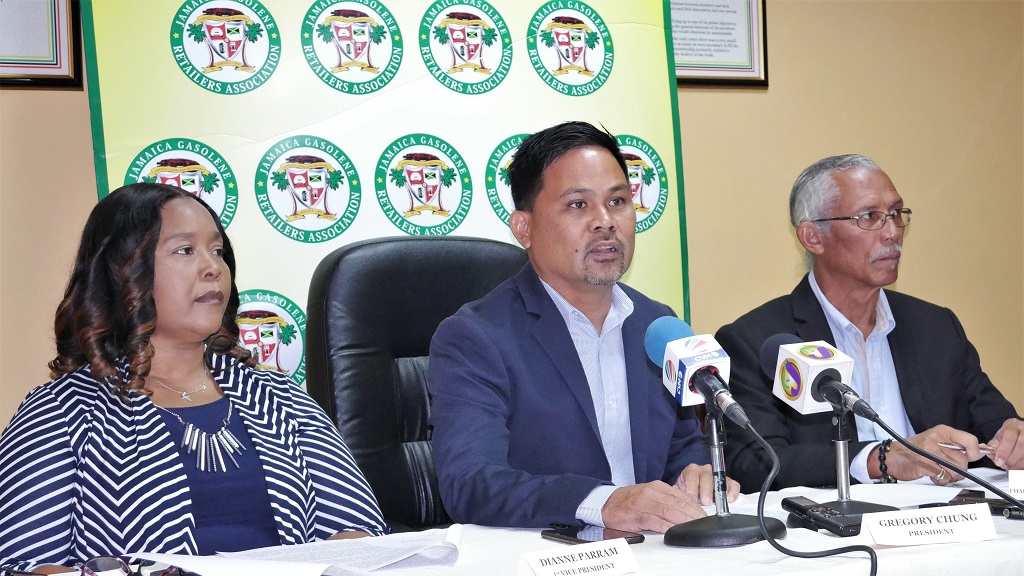 Gregory Chung (centre), President of JGRA, addresses journalists at a press conference on Friday. Seated beside him are Dianne Parram, first VP of the JGRA and Phillip Chung, the immediate past president.

The organisation representing more than half of gas stations in Jamaica is to embark on a campaign to educate the public on the proper use of their facilities, in the wake of the fiery explosion at a service station in Manchester which resulted in one death, several injuries and millions of dollars in losses.

The Jamaica Gasolene Retailers Association (JGRA) says many of its members’ gas stations are overrun with taxis and other persons not doing business with the stations.

“Gas stations, especially those in towns, suffer from severe congestion mainly from persons not transacting business with the stations. Although signs are posted at all gas stations with safety rules, the requests by staff members for safety compliance are often met with harsh resistance,”JGRA President Gregory Chung said Friday at a press conference in St Andrew.

The association said several stakeholders, including the police, the Transport Authority, the Ministry of Energy, taxi associations and the wider public would be engaged in order to make gas stations safer.

Chung added that the association would be engaging taxi operators to find solutions to the problem.

“It’s not the JGRA against taxis, we want to educate everybody to come on board and follow the rules," the president added.

While commending the fire services, the police and hospitals for their work in actions in saving lives and property following the Mandeville incident, the association says the authorities and partners can  do more “to engender a culture of safety” at gas stations.

“The police have in the past and still do, assist in policing but it is really inadequate and our members are left to fend for themselves most of the times," Chung said. “If you have 30,40 people on a site, it is unreasonable for the employee to monitor every single person to make sure they are obeying the rules."

Of the assistance of the police in patrolling gas stations, the JGRA President said “more can be done”, but admitted “the police can’t stay at the gas station all day.”

Meanwhile, the association says it was satisfied with the level of training for their staff members and that a programme for the training to be certified by HEART NTA had been outlined in the past.

There are about 330 gas stations islandwide, with about 55 per cent of them being members of the JGRA.