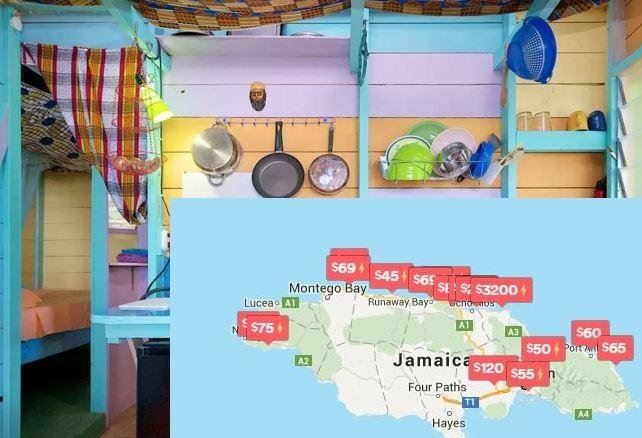 A photo depicting a local listing paired with a screenshot showing available listings and cost per listing from Airbnb.

Despite the Jamaican economy having grown by 1.5% in the third quarter of 2015, many Jamaicans are still feeling the pangs of an overall weak economy.

To cope Jamaicans are turning to the online marketplace, in particular, Airbnb.

With over 330 plus listings in Kingston alone, Jamaicans are using the website to pay off mortgages, help with utilities and in general earn much needed foreign exchange.

Airbnb is an online marketplace that connects people wanting to rent their homes and spaces with people needing affordable accommodations.

From renting an entire home, to renting a space on someone’s couch for the night (couch surfing), Airbnb allows individuals willing to share their space an opportunity to earn an income.

One criticism of the vibrant Jamaican tourism product has always been the abundance of all inclusive hotels and holiday packages, which tend to benefit hotels and large establishments while neglecting the local community.

However, according to Jamaicans, online tools like Airbnb are helping more people in the local communities to benefit from the spoils of tourism, particularly those outside of resort areas.

One corporate area woman who has been a member of Airbnb for the past two years has lauded the website as being great for “sharing the wealth”, as she has successfully used the website to earn enough to sustain her mortgage.

The 47-year-old woman, who lists her Duhaney Park home on the website, renting every room and even her couch, told Loop News that she turned to the website after her husband died and she was on the brink of losing her mortgage.

“It is not just tourists, it is local people from the countryside and all over Jamaica that are visiting Kingston for the day and can’t afford a hotel. I have been able to connect with them and earn,” said the woman who goes by the name 'Miss Elise'.

Miss Elise is just one of the many Jamaicans, who are logging on to the website to share their space and earn an income, with listings for places in Jamaica being added daily.

Despite the success stories of people like Miss Elise, who have benefited from what some have deemed the new “sharing economy”; there is already a brewing debate in the United States and in some Jamaican circles about the social and economic impact of businesses like Airbnb – with many saying such online marketplaces undermine the established economy.

Eight luxurious Airbnbs you won’t believe are in Jamaica

Search for washed away 8-year-old ends in tragedy

Watch: Niceness on the road for Carnival Monday 2020

Harbour View move to within one point of RSPL safety

Search for washed away 8-year-old ends in tragedy