‘Stan, the T-Rex' goes on auction for millions 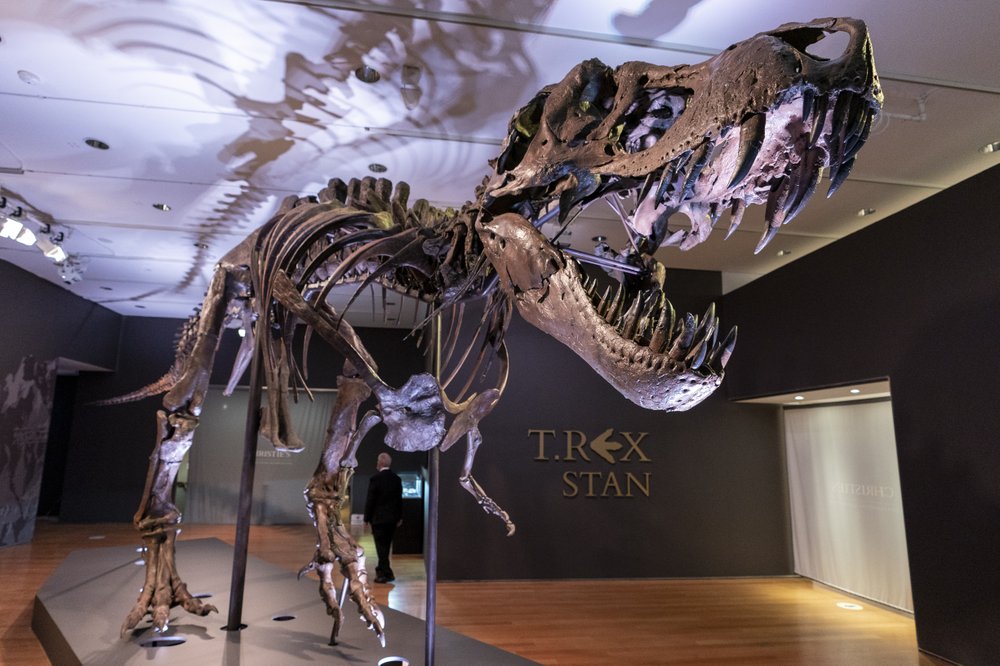 Stan, one of the largest and most complete Tyrannosaurus rex fossil discovered, is on display at Christie's in New York. (AP Photo/Mary Altaffer)

He weighed at least seven tons and had eyes the size of baseballs. His bite could have crushed a car. He bore scars from fierce prehistoric battles.

All this could be yours for as much as eight million dollars!

The legend of the Tyrannosaurus rex nicknamed Stan is getting fresh life thanks to Christie’s.

The auction house put his bones on display starting Wednesday through floor-to-ceiling windows at its midtown Manhattan gallery in advance of putting them up for auction.

‘He is 37 feet long and one of the fiercest killing machines that has ever roamed the earth,’ said James Hyslop, head of the auction house’s science and natural history department.

About 67 million years after ‘Stan’ did all that roaming and killing, his remains were discovered in 1987 by paleontologist Stan Sacrison in a geological area in the Midwest known as the Cretaceous Badlands.

The fossils became known for forming one of the most intact dinosaur skeletons ever discovered.

Researchers also marvelled at how the skull had large puncture wounds, speculating that they were the result of T-Rex warfare.

The skeleton — being put up for sale by the Black Hills Institute in South Dakota — will remain on display through October 21 at Christie’s flagship location at Rockefeller Centre.

The auction is set for October 6.

Hyslop assured potential buyers that Stan ‘is being offered with no reserve. So absolutely everyone has a shot at him.’

BOJ to raise $5.5 billion in CD auction to public sector