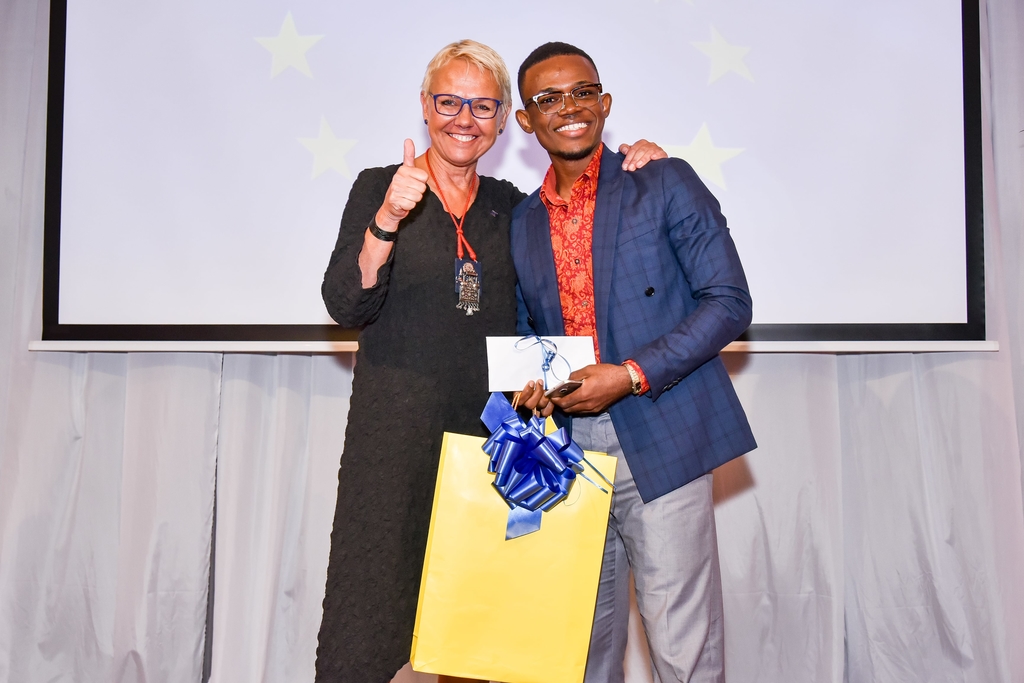 Deron Douglas (right) receives award for winning the 2019 EU Short Film Competition from Malgorzata Wasilewska, EU Ambassador to Jamaica at an awards ceremony at the Institute of Jamaica.

St Thomas creative, Deron Douglas, is the winner of the 2019 environment-themed European Union Short Film Competition, Jamaica, with the film “The Tree Speaks”. It's the first time the EU is staging the competition in Jamaica.

Deron was announced the winner during a ceremony on Wednesday, at the Institute of Jamaica in Kingston.

He beat 21 other finalists to land the first prize of an all-expense-paid trip to Germany to pursue an intensive short course at the MetFilm School in Berlin.

"Maybe one day I will wake up and realise," a shocked Deron said of his victory. Hours before, he had leapt on the stage of the Institute's Lecture Hall, and raised his hands to the roof in jubilation and shouted 'yes!' after collecting the top awards. "All of this has been a dream that has finally come through. I am so grateful and humbled," he added. 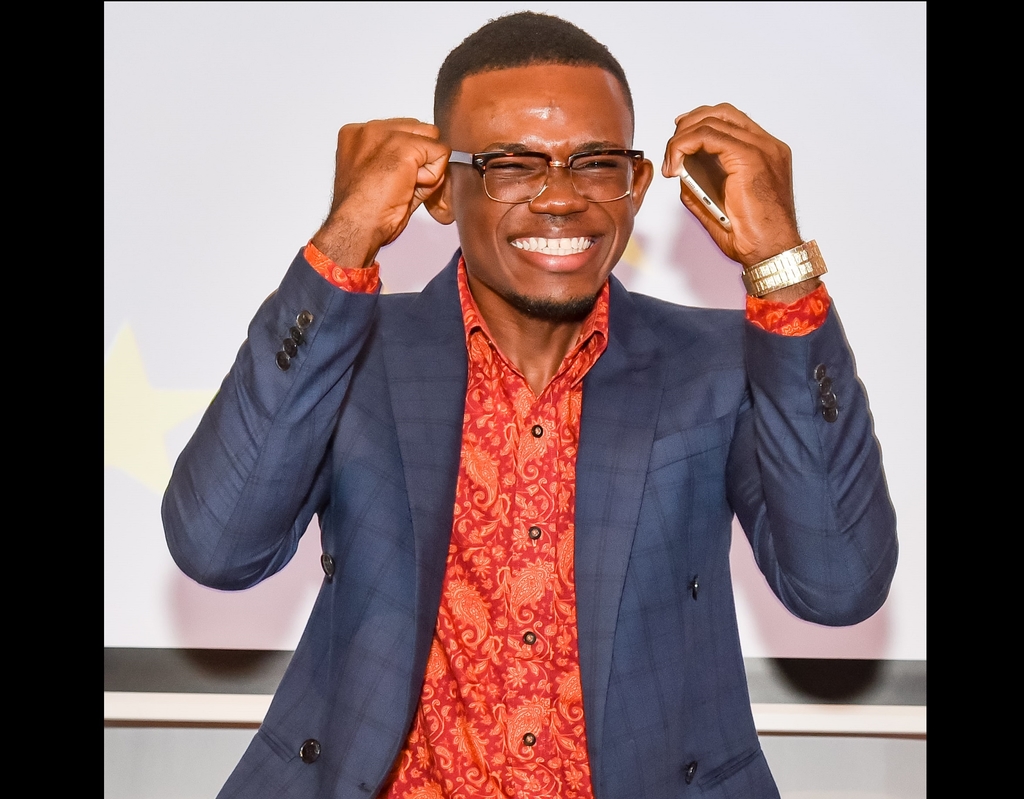 A shocked Deron Douglas shouted 'yes!' as EU Ambassador Malgorzata Wasilewska announced him winner of the 2019 Short Film Competition at an awards ceremony at the Institute of Jamaica on January 15

"The judges say they were impressed with the high quality of the film, the compelling storytelling and the unique creativity that was on show," said Malgorzata Wasilewska, the EU Ambassador to Jamaica, who announced the winner.

The winning film “The Tree Speaks” features a little girl whose imagination took her on a journey dominated by talking trees venting their frustrations about their ill-treatment by humans. The child grew to become a leading advocate for the environment.

In addition to his trip to Germany, Deron's film will be screened later this year at the European Union Film Festival and given publicity across EU online platforms. Options are also being discussed for the screening of all the films on special occasions for Jamaicans to view.

The 22 finalists, most without experience in filmmaking, came from six parishes.

Congratulating the participants, Ambassador Wasilewska noted that through their work and interest, they were challenging some of the common misconceptions about youth, including that they are socially disengaged and apathetic about the future. "They are very much aware and concerned about the issues that trouble us all; and if given the opportunity, they will take the lead and or play their part in defence of their community, country and the world," said the Ambassador.

In her keynote address, Olivia Grange, the Minister of Culture, Gender, Entertainment and Sport, commended the EU's work in Jamaica and urged the finalists to use the lessons from the competition to propel them to global stardom.

Click the gallery for photos from the awards ceremony

Tawayne Spence impressed with his reflection on behalf of his fellow contestants, which highlighted not just the experiences from the competition but included a stirring a call to action for environmental protection. "We must defend what is right even when others think it's a hoax," urged the University of Technology student, before adding: "We must take resolute action through advocating, educating, and enact laws that emphasize the utmost protection of our world."

Film Commissioner, Renee Robinson, welcomed the finalists as Jamaica's latest creative talents and urged them to capitalise on all opportunities because they are emerging during a 'transformational' time for the Jamaican creative industries.

Four other participants received sectional awards: Danielle Mullings, of the University of the West Indies, Mona, won Best Storytelling and an iPad Pro for the documentary “Port Royal's Mangroves”; Best Editing and a MacBook Pro computer went to Latanya Martin for “The Change Starts with You” and Kemanie Boothe, a student at the University of Technology, won Best Cinematography for his film “It Lives and It Breathes”. He also won a professional video.

For his entry, “The Parish Capital”, Jahvar McLean received a special award, which was established after the seven-member judging panel agreed that his film was uniquely enthusiastic and creative in its call to action to protect the environment. Frame Of Reference post-production company awarded Jahvar four filmmaking sessions. The Jamaica Film and Television Association awarded all five sectional winners a one-year membership prize.

The judging panel, comprising experts in filmmaking in Jamaica, was chaired by Yvette Rowe, a lecturer at the Caribbean School of Media and Communication.

The ceremony was a family affair as all contestants invited family and close friends to share in their moment of recognition. All 22 finalists were presented with certificates to recognise their successful participation in the competition.

The EU in Jamaica launched the environment-themed competition in September 2019 targeting young and amateur Jamaican filmmakers, 18-25, to both provide a platform to expose their talents while promoting the voice of youth in addressing environmental challenges. Finalists had to produce 3-5 minute films on the theme "My Environment: a heritage to be protected." A capacity-building filmmaking workshop facilitated by experts from Europe and Jamaica was held in October 2019.