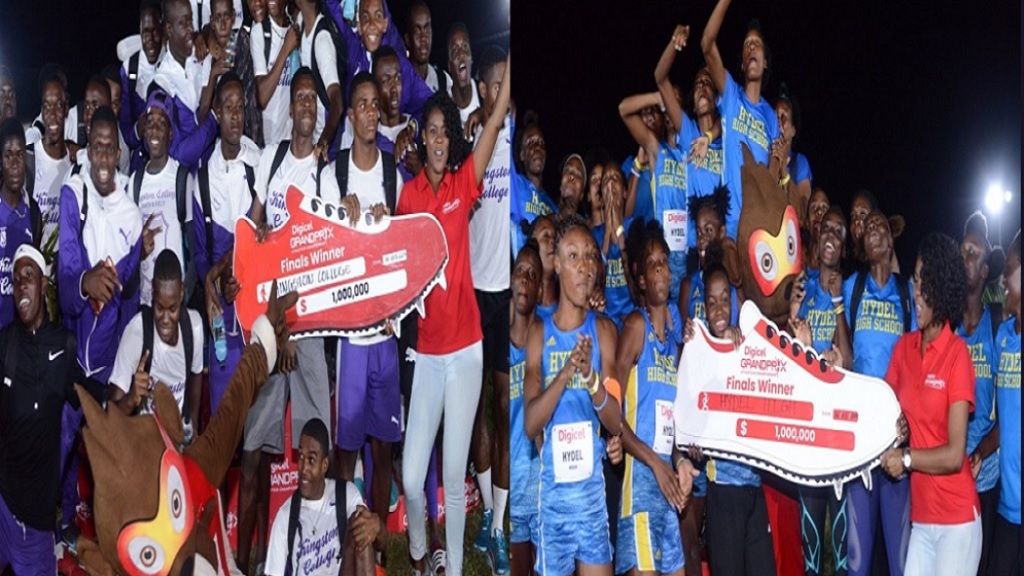 The combination of photos show athletes from Kingston College (left) and Hydel High displaying their symbolic cheques after the schools won the fifth staging of the Digicel Grand Prix Athletics Championships on Saturday, March 16, 2019 at GC Foster College. The 2020 staging will take place on March 14.

St Mary High and Buff Bay High won the girls and boys’ titles at the Eastern Athletics Championships at the National Stadium on Tuesday.

Highgate-based St Mary High proved a cut above rivals to easily defend their girls’ title by 105.50 points, while after a ding-dong battle on the final day Buff Bay High dethroned St Mary High by a point in the boys’ championship.

St Mary High, which entered the second and final day with a slim 3.5-point lead over Buff Bay High, totally dominated the day on their way to win the girls’ title with 407 points.  Buff Bay High, just like last year, were well beaten into second place on 301.50 points, while Oberlin High finished third on 198 points. Titchfield High (171.50 points) and Glengoffe High School (121 points) complete the top five in the girls’ championship.

In the boys’ championship, St Mary High also entered the final day with a very slim lead but just failed to stave off Buff Bay, which they had dethroned by 31 points in 2019.

The St Mary High boys entered the final event, the 4x400m relay, with a six-point lead ahead of Buff Bay High. However, Buff Bay High won the event in 3:25.63 to pick up 12 points to end the championship with 245 points. St Mary High were relegated to fifth place in 3:31.01 for five points to lose the championship by a point. Titchfield High were well beaten into third place with 148 points. Port Antonio High (115 points) and St Thomas Technical High (111 points) round off the top five in the boys’ race.

The two-day championship produced eight new meet records, while one was equalled.

In the Girls’ Class 1 800m final, Schaafe won easily in 2:16.48 to better the previous meet record of 2:16.59 set by her schoolmate Titania Markland in 2013. Latasha Hall was well beaten into second place in 2:19.50 to round off a one-two finish for St Mary High. Oberlin’s Brittanique Ashman was a distant behind in third with a 2:37.68 clocking

In the Girls’ Class 3 4x100m relay, St Mary High shattered the meet record in the preliminary round with a 48.02-clocking to beat the previous mark of 48.50 they set in 2018. The quartet returned to easily win the final in 48.10, again beating the previous meet record.

St Mary High girls also produced the one meet record that was equalled.

One of Richards’ two victories came in meet record. He won the Boys’ javelin throw open with an effort of 52.33m to easily beat Oberlin High’s Javian Edwards, whose effort of 49.77m also bettered the previous meet record of 49.14m set by Shavian McFarlane in 2018.

He followed up with a second-place finish in the Class 1 triple jump with an effort of 14.42m, just behind Titchfield High’s Jeremy Hibbert who won with 14.63m.

The other meet records went to Shatoy Chambers and Bianca Samuels, both of Oberlin High, and Racquil Broderick of St Mary High.

Chambers won the Girls’ Class 1 discus throw in a meet record 39.83m to surpass the previous mark of 38.35 set by Shantel Reid of Happy Grove in 2011. It was a one-two finish for Oberlin High as Talleen Gordon finished second with 36.56m, while Kielia Guthrie of St Mary High ended third with 27.80m.

St Mary High girls swept the 100m events with one-two finishes in Classes 4 and 3. They also won all classes in the 4x100m relays.

Shantae Pryce was the standout for St Mary High girls in the sprint events by copping the Class 3 100m-200m double.

Kenoy Francis of Bull Bay High dipped below the 11-second barrier by winning the Boys’ Class 1 100m in 10.98 seconds.

One again, school teams (boys and girls) will vie for the title of Digicel Grand Prix champion and $1 million each towards gym equipment or development of their school’s training facilities.

KC and Hydel High are the reigning boys and girls' champions of the Digicel Grand Prix Championships, which is now in its sixth year.