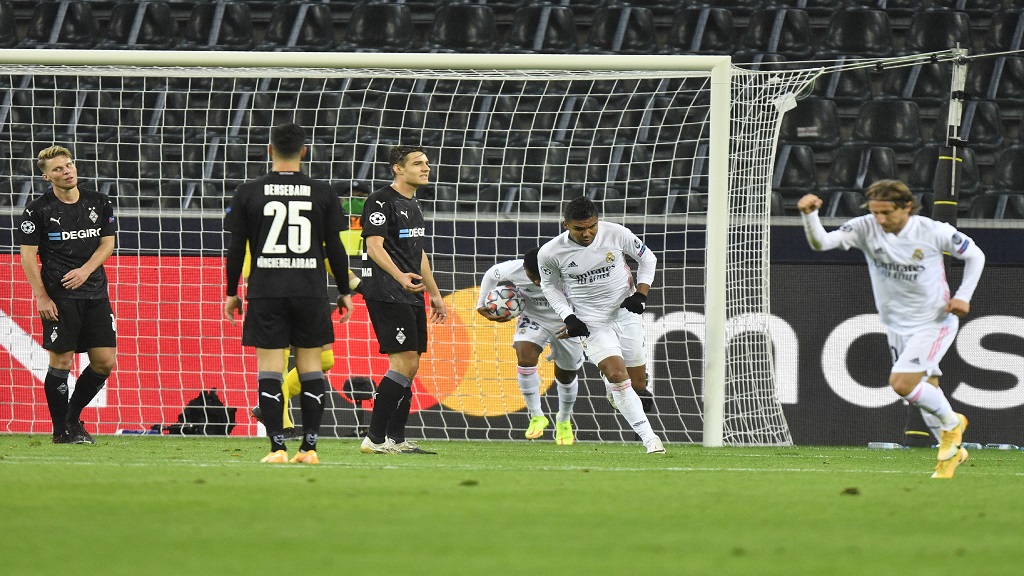 Marcus Thuram's brace gave hosts Gladbach the lead at Borussia-Park but late strikes from Karim Benzema and Casemiro averted a record fourth consecutive European loss for Madrid with a 2-2 draw on Tuesday.

Gladbach became the 30th different opponent Benzema has scored against in the Champions League – only Lionel Messi (36), and Cristiano Ronaldo and Raul (both 33) have scored against more teams in the competition's history.

The comeback did little to paper over the cracks in a chaotic Madrid performance that was strewn with defensive mistakes against the Bundesliga side.

Despite seeing Madrid struggle for the second time in as many Champions League games, following a 3-2 defeat to Shakhtar Donetsk the previous week, head coach Zidane defended his players.

"We didn't think this would be such a drama," Zidane told reporters. "But my team showed that they know how to react.

"I thought we were very good in the first half. The big pain is that we committed a serious error in how we conceded their first goal.

"But this final result is just another demonstration of the character my team has. We always play to win and show the hunger to win. No way were we happy with the draw."

The result leaves Madrid with one win, one draw, and two defeats from their last four games in all competitions, and Zidane must prepare for back-to-back home games against Huesca in LaLiga and Inter in the Champions League.

Failure to take maximum points in those games could leave the Frenchman's position under threat but Zidane said the character shown by his players left him confident.

"We didn't transform the possession we enjoyed into proper chances," said Zidane, whose Madrid avoided defeat in a Champions League away fixture having trailed by two goals for the first time since December 2006.

"What I'll take from this experience is how these players reacted. This was a very important point to secure.

"This is going to be a difficult year for everyone, but I'm proud of my team tonight. Playing like this we'll go through the group to the next round without any doubt."