Proposal for dedicated praedial larceny days in court to be revisited 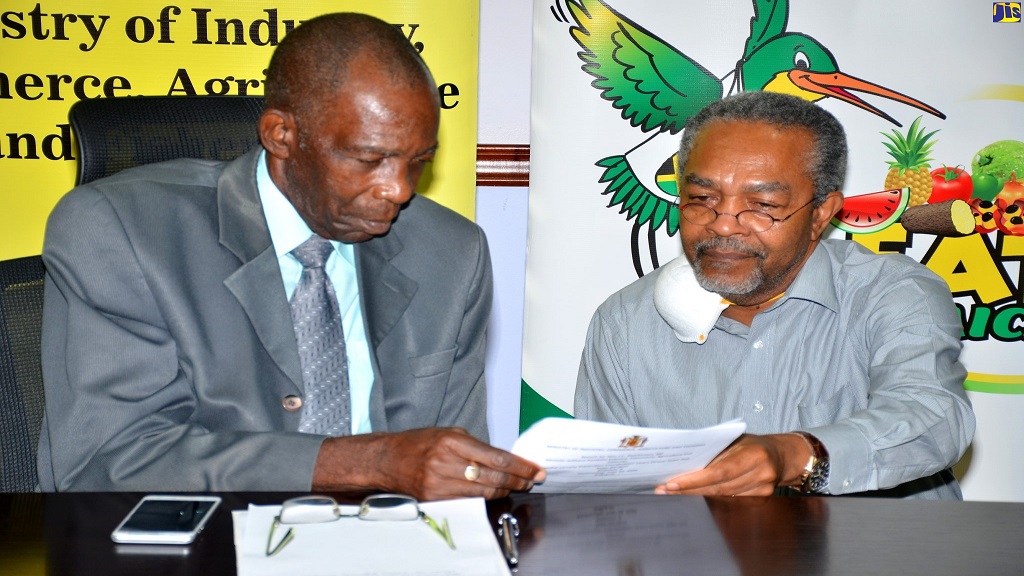 Minister without Portfolio in the Ministry of Industry, Commerce, Agriculture and Fisheries, Hon. J.C. Hutchinson (left), in discussion with consultant, Dr Omer Thomas, at a virtual town hall meeting on Wednesday, June 10.

For the 2020-2021 financial year, the Ministry of Industry, Commerce, Agriculture and Fisheries is to revisit a proposal for the scheduling of dedicated days for the hearing of praedial larceny cases in court, to increase the rate of convictions in these matters.

This was noted by Minister without Portfolio in the ministry, JC Hutchinson, at a virtual town hall meeting held on Wednesday, June 10.

The event, hosted by the Praedial Larceny Prevention Co-ordination Unit in the ministry, was aimed at bringing together stakeholder groups to implement anti-praedial larceny interventions to reduce losses in the agricultural sector.

“Praedial larceny is acknowledged widely and regionally as a crime that is a disincentive to agricultural production. This ministry intends to eradicate praedial larceny so that agriculture, which is the mainstay of our economy, can grow from strength to strength,” Hutchinson said.

He said the proposal is one of several matters under legislative review to strengthen anti-praedial larceny measures.

In noting that the ministry has adopted a multi-sector approach to anti-praedial larceny interventions, Hutchinson said strengthening the legislative capacity is a critical element in combatting theft in the agricultural sector.

“We will continue with steps to engage the judiciary to strengthen capacity to combat praedial larceny,” he emphasised.

Another matter for this financial year is the revision of the Agricultural Produce Act. The review has been completed, and recommendations have been made and are at an advanced stage for submission to Cabinet.

Other changes being proposed for the new legislative year are expansion of the definition of agricultural produce, to include aquaculture; increase in the types of crops, such as castor bean, bamboo, hemp and mushroom. Another is increasing fines up to $3 million, and imprisonment of up to one years.

“We also see the value in not only increasing fines and penalties, but to add a restitution clause so that farmers can recoup losses directly from the convicted criminals. Farmers are sometimes disheartened that they are left to seek their own remedy for losses suffered after honouring their obligation to the state in the prosecution of their cases,” Hutchinson argued.

Additionally, he said the unit is seeking to improve its traceability systems by changing the existing produce receipts, with the addition of telephone numbers and tax registration numbers (TRN).

“I can assure you that the ministry is committed to stamping it (praedial larceny) out through a five-pronged policy approach. It includes public education, management of the traceability systems, legislative amendments, capacity building and the development of a sound multi-sectoral approach that targets the root of the crime,” Hutchinson said.