Skip to main content
Breaking News |
‘Teen cop’ held with stolen car at SOE checkpoint in East Kingston
Police High Command warns against ‘Jump Triple Challenge’
Why you should do due diligence when seeking out properties
Poll: Are you confident about meeting your financial goals?
Ocho Rios Primary teacher dies after illness; school in mourning
Matthew Samuda appointed Cabinet minister
Fontana's Waterloo branch delivers a ‘December to remember’
PMI recommends support to parents, kids to treat high risk adolescents
WATCH: If I can do it, you can too, says PM after completing Sigma Run
Loop Lens: Hanover Charities, Chukka Foundation annual Polo affair

Nothing to celebrate, declares PNP of Government’s post-IMF fanfare

The Opposition People’s National Party (PNP) has poured cold water on the supposed economic successes of the Government, charging that poverty is on the increase while growth figures are tumbling.

Opposition Spokesman for Finance, Mark Golding, made the criticisms on Thursday, the same day the Andrew Holness Administration and the International Monetary Fund (IMF) celebrated Jamaica’s successful completion of the programme it embarked on with the multi-national lending agency six-and-a-half years ago. It spanned successive governments.

Golding, in a statement, said the Opposition is pleased that Jamaica has completed the IMF programme. But that was the only positive which he cited, as he immediately expressed concern that “the programme’s significant fiscal and structural reforms are not delivering the higher levels of economic growth and reduction in poverty that were anticipated".

“The recent trends are not encouraging. GDP growth for the second quarter of 2019 was one per cent, falling from 1.7 per cent in the first quarter,” Golding stated.

The Opposition spokesman declared: “Prosperity remains an illusion for all but the privileged few."

He pointed to the latest available data (2017), which he said shows that poverty has increased by 2.2 percentage points to 19.3 per cent, which he said is “an unwelcome reversal of the trend in poverty reduction over the preceding three years.”

Golding said the Bank of Jamaica’s (BOJ) aggressive monetary policy of driving down its policy rate to 0.5 percentage points on Jamaican dollar funds while reducing the cash reserve ratio to release additional liquidity to the banking sector, is not yet showing an impact on economic growth. This, he said, was while inflation moved up 1.1 per cent in July, and 0.8 per cent in August.

Golding also pointed to what he described as the country’s worsening trade deficit, with imports reaching US$2.77 billion between January and May, up 15.1 per cent, while exports were US$751 million, an increase of only 6.3 per cent.

He said the growth in liquidity from the BOJ’s monetary policy is being channelled into foreign exchange purchases to finance the greater levels of imports. 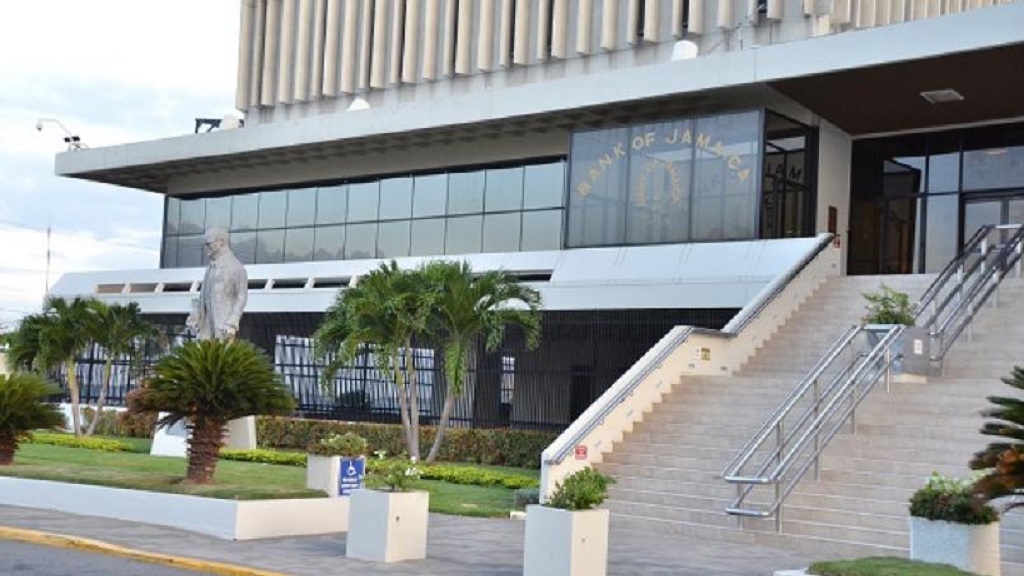 The Bank of Jamaica building in downtown Kingston.

“It has also flowed into inflated asset prices in the equities and real estate markets, at a time when Jamaica has not been achieving robust economic growth,” he stated.

"In contrast, the manufacturers and exporters have recently stated publicly that the productive sector is being starved of the resources (that are) needed to drive growth.”

By way of solution, Golding said that in the short- term, the circumstances call for proactive and adept fiscal management within the framework of the approved budget.

But he said for the first four months (April through July 2019) of the current fiscal year, the Government has run a primary surplus that is exceeding the budget by $5.6 billion (12.9%), while capital expenditure is below budget by $4.2 billion (21.4%).

“Both of these outcomes need to be brought back into line, so that delayed Government spending does not worsen an already bad situation,” declared Golding.

He also suggested that beyond the short-term, Jamaica needs to accelerate the flow of credit to the productive sector, especially micro, small and medium enterprises (MSMEs), strengthen market linkages between local producers and the tourism sector, and channel capital expenditures to build the agricultural sector’s resilience to climate change.

Golding warned that in the post-IMF era, “it cannot be business as usual if Jamaica is to get out of the rut of low growth, national despair amidst increasing poverty, and intolerable levels of violent crime.”

The shadow finance minister also stated that the lay-offs and impending temporary closure of the Alpart refinery, with the duration being uncertain, will have a further dampening effect on economic growth.

“Similarly, this year’s adverse weather conditions may well impact negatively on growth in agriculture, underscoring the need for measures to mitigate the ongoing effects of climate change.”

Completion of arrangements with IMF a major milestone for Jamaica – PM

Gains made under IMF programme will continue – Clarke

Why you should do due diligence when seeking out properties

Poll: Are you confident about meeting your financial goals?

Why you should do due diligence when seeking out properties