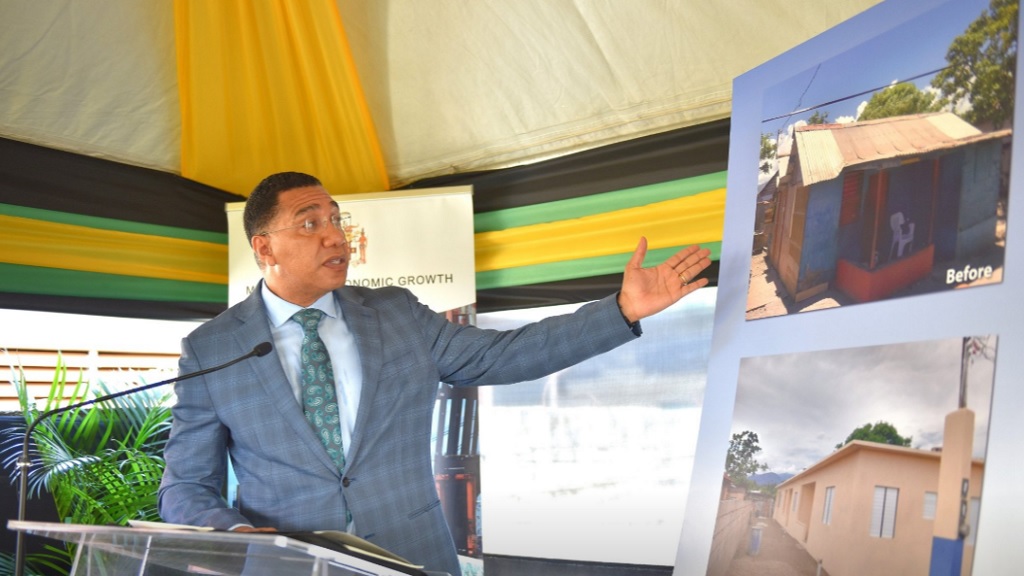 Prime Minister Andrew Holness at the handing over ceremony for a HOPE programme housing solution to three sisters and their families in Annotto Bay, St Mary last Thursday.

With his Government being bruised by several allegations of malfeasance, Prime Minister Andrew Holness has confidently assured that no corruption exists within the Government's Housing, Opportunity, Production and Employment (HOPE) programme.

The Holness-led Administration has over time been at the centre of public scrutiny over several corruption scandals involving Petrojam, the Caribbean Maritime University (CMU), and more recently, the St Ann Municipal Corporation.

Last week, the Integrity Commission submitted to Parliament its long-awaited 215-page report into the operations of Petrojam. It pointed to several alleged breaches by officials linked to the state-owned oil refinery.

On Friday, Jamaica Labour Party (JLP) councillors of the St Ann Municipal Corporation (SAMC) took a decision to ask St Ann’s Bay Mayor, Michael Belnavis, who is also the corporation's chairman, to resign from his post.

The now controversial mayor has been linked to allegations of corruption and impropriety in relation to a near $47 million COVID-19 clean-up project of Ocho Rios, and the mounting of a charging port at the corporation for his private Porsche motorcar, with the port being since dismantled.

A recent newspaper article also asserted that the mayor had captured Government land on which a building was illegally constructed with no municipal building permit as required by law. The building is said to have since been demolished.

But amid all the stories of alleged corruption, Holness last Thursday stated that he was certain that no aspersions could be credibly made by anyone in regards to any of the projects that are being undertaken by the Ministry of Economic Growth and Job Creation, for which he is the portfolio minister.

He made the claim at a ceremony where he handed over a new multifamily house to three sisters living in Annotto Bay, St Mary, under the social housing component of the HOPE programme.

The seaside board and zinc tenement yard which had housed the three sisters and their children was transformed into three attached two-bedroom units with bathrooms and other amenities, at a cost of approximately $22.6 million.

Before officially handing over the units, the prime minister argued that the process to build the housing solution was transparent.

He said that “By virtue of the Government's intervention with taxpayer's money, this is what it was spent on. There is no trace, no hint, no suggestion of corruption, because we made sure that part of the process of moving from here to here is that there is sufficient accountability, oversight, systems, processes, rules, and the right people (were present) to make sure that all the money budgeted to change this (the house) ends up here."

Holness said it was very important to highlight that point "because in the current context of things, the public is very sensitive, and we have to be careful to ensure whatever projects we do, even at the expense of them taking longer, we have to have accountability in place."

In relation to the provision of housing for other individuals who required assistance, Holness said the Government intends to use several models to deliver more housing solutions under the HOPE programme.

The models, he said, are geared towards the benefit of persons who are not working, as well as those who are not National Housing Trust (NHT) contributors because they are not employed.

Additionally, persons who do not have an income and would stand no real chance of purchasing a house on the open market, will also be in consideration to benefit from the models to be constructed.

"So the Government has to put in place programmes that will help them (needy citizens) to improve the conditions, and that is why it is called social housing. Now we are going to employ several models of delivering social housing. One model is to take over a housing development like this one."

He continued: "I called it a housing development (in) trying to be political correct, but really it is a tenement yard or a big yard or a yard with several houses in it, but all of them are in substandard condition... And we are going to replace this."

Holness further explained that based on the budget, which had to be cut due to the impact of the COVID-19 pandemic on the economy, the Government could possibly construct 350 housing interventions across the country under the HOPE programme.

Additionally, he said the HOPE programme will now be focused more on housing solutions than unemployment.

"We are launching, and this is evidence of it, the housing element of our social intervention, and this is the new social housing programme.

Initially, we had a budget of $1 billion, and that would have done over 1,000 units right across Jamaica. That was the intention. We have had to cut the budget because of the (COVID-19) situation, but we are still pressing ahead," Holness indicated.

He went on to describe the new multifamily house in Annotto Bay as "first-class".

"Now as you look at this facility, you will see that we didn't cut any corners. This is a facility that anywhere would be rated as first-class; (it is) strong (and) well built," said Holness.

HOPE recruits to assist with electronic monitoring of returning J'cans

Alternative road on the table for Annotto Bay in St Mary

Bertie Dan teams with Shashamane 77 Records for 'Stay with Me'

Children should not be denied education because of hairstyles - PM