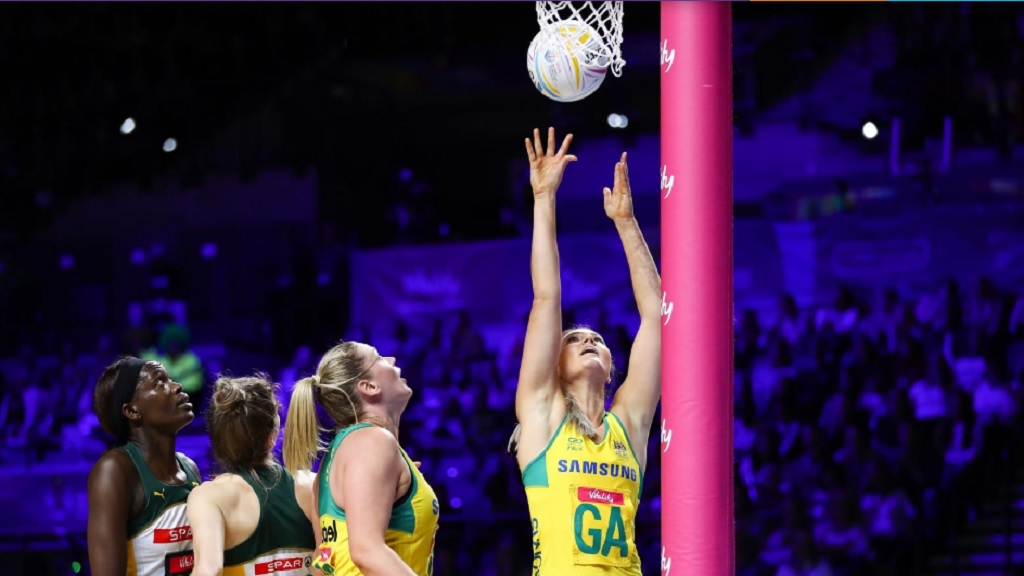 A general view of the match action between Australia and South Africa during their Netball World Cup match in Liverpool, England, Saturday July 20, 2019.

Australia have booked their place in the Vitality Netball World Cup final, courtesy of a 55-53 win over South Africa in their semi-final match in Liverpool, England on Saturday.

The reigning champions, the world No. 1 ranked side, will face fourth-ranked New Zealand in the final on Sunday. New Zealand produced a stunning performance to beat England 47-45 in the other semi-final.

In what was an absolutely pulsating game, South Africa made a mockery of their fifth-placed world ranking to run the holders and 11-time champions closer than many expected – with the two-goal winning margin making this the joint-closest World Cup semi-final ever.

Australia coach Lisa Alexander sprung a couple of surprises with her starting line-up, with both Caitlin Bassett and Courtney Bruce starting on the bench. For South Africa, Bongiwe Msomi – who limped out in the early stages of their previous match against England – was fit, and started at wing attack.

The South Africans were on the scoreboard first, through Lenize Potgieter, although she then missed an early chance to put daylight between the teams.

After that reprieve for Australia, the sides exchanged goals in the early stages, as an absorbing first quarter progressed. Nerves seemed to take hold of both midway through the quarter though, as a series of loose passes and some effective defensive pressure at both ends of the court put a temporary halt to the scoring at 6-6.

However, Australia’s intense pressure in the middle of the court was beginning to tell, and after they turned possession over, Caitlin Thwaites took the opportunity to put them ahead for the first time at 8-7.

Despite a couple of impressive interceptions by dynamic goal keeper Phumza Maweni, South Africa were unable to drag themselves back level, and an excellent piece of work by Jamie-Lee Price – combined with a held ball call against Potgieter – allowed the Diamonds to stretch their lead out to 14-10 after the first quarter.

Potgieter was again penalised for a held ball early in the second quarter, and mistakes were beginning to creep in elsewhere for the South Africans, as they were being forced to work hard for any piece of forward momentum.

The Australians, meanwhile, were continuing to find their shooters with comparative ease, and Thwaites and Tippett weren’t wasting any opportunities which came their way.

The lead stretched out to six, and was held at that margin for a period of time as Potgieter’s accuracy helped to keep the Proteas just about within touching distance.

However, that build-up of pressure told with a few minutes of the quarter remaining, as Paige Hadley and Jo Weston combined to force a turnover of possession. The ruthless nature of their team-mates’ shooting then ensured that the advantage was pushed out further, and although Tippett’s shot with the last action of the half didn’t land in time, the Diamonds still held a commanding 31-23 lead at the break.

South Africa needed a huge effort in the third quarter – and they got it.

Both sets of shooters were exceptional in the early stages, as the margin stuck at seven. However, when the Proteas needed a hero, up stepped Karla Pretorius, whose supreme reading of the game and timing turned possession over for the South Africans, who were finally able to take advantage of a glimpse of Australian weakness.

Three goals in a row from Potgieter and Maryka Holtzhausen brought them back to within three, and despite Thwaites having the final say in the quarter – and maintaining the Diamonds’ 100% record – the lead at the end of the third was down to 43-39.

Australia held the margin at four in the early stages of the fourth quarter, but when they were penalised for held ball, the South Africans – not to mention the majority of the crowd who had adopted the Proteas as they mounted their comeback – sensed an opportunity.

With ten minutes left, Potgieter reduced the deficit to one (45-44) and the already electric atmosphere was cranked up another level.

Two crucial Australian interventions – the first by Liz Watson and the second by Jamie-Lee Price – looked to have put the game firmly back in Australia’s grasp, but the Proteas weren’t done, and again came back to 50-49.

That vital additional turnover just proved elusive though, with the unerring accuracy of Thwaites – who finished at 100% – helping to edge Australia over the line, 55-53.

“We’re happy to make the final. It was pretty tough out there – their shooting circle and their defensive line were really impressive today, so although we weren’t as happy as we could have been with the second half, we had enough lead from our solid first-half performance to hold them out.”

Netball World Cup: Jamaica close in on fifth spot with win over Uganda

England-Pakistan 2nd Test heads for draw after another washout