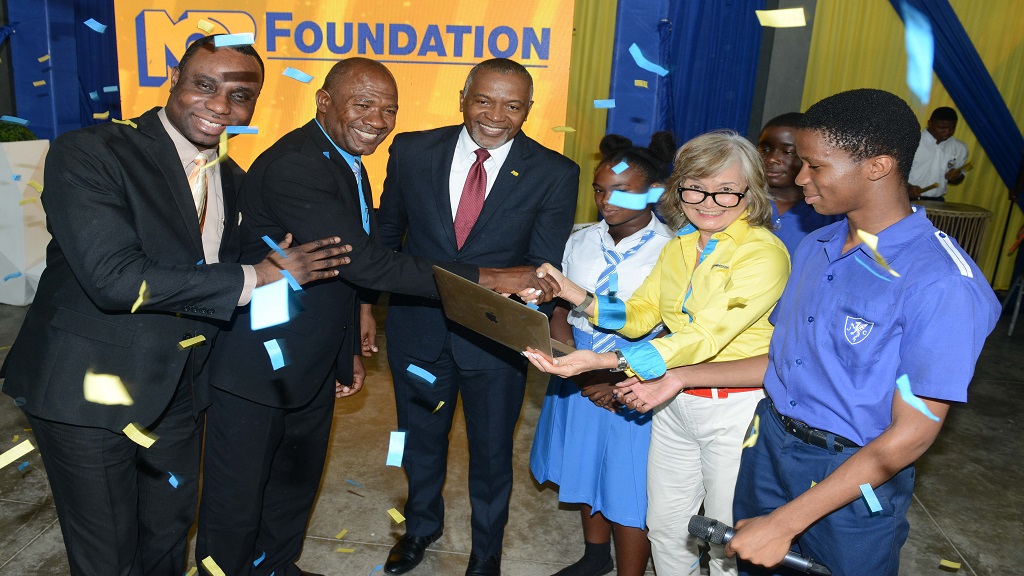 The philanthropic arm of the National Commercial Bank celebrated 15 years of sponsoring CXC/CSEC Principles of Accounts and Principles of Business, by transferring $13.9 million to the Overseas Examinations Commission live at Jamaica College (JC) on Wednesday.

The NCB Foundation through its flagship NCB CSEC National Bursary Programme made an investment that offset the cost of some 4,164 sittings for 3,334 students from government approved public and private schools for last sitting May-June exam period. At an official handing over ceremony held at JC, with members of the Ministry of Education, the OEC and others, Stuart Reid, Director, NCB Foundation explained the importance of this initiative.

“This programme fills a gap in the education sector, reinforcing the Ministry of Education’s efforts to grant subsidies for four CSEC subjects,” he said “With the N.C.B. Foundation funding the full cost for POA and POB, students now have the opportunity to sit six subjects at no cost to them and meet the five-subject minimum requirement for university studies,” he added. In addition, Hector Stephenson, Executive Director, OEC said this initiative benefits more than just the students.

“Every year, for the past 15 years, some parents, especially those with minimal or low income have been provided financial help with the payment of exam fees through the sponsorship of NCB,” he explained. The OEC also expressed gratitude to the NCB team for their efforts. “We thank you NCB for your support. We thank you for being such a good partner. We thank you for championing a cause for the Jamaican young men and women and look forward to many more years of productive partnership,” he said.

Also addressing the crowd was Rohan Wong, Vice principal, JC who lauded NCB for its efforts to support education and youth development to the benefit of the nation.

“NCB is the number one bank not because of their profit or how they serve Jamaica but specifically because of how they support education and the development of the youth in Jamaica,” he said. “It is always a pleasure to know that you’re giving back to the community and the most important community I believe, are education and the development of Jamaica.”

Over the 15-year period, the bank says it has invested in excess of $141 million, impacting the lives of more than 100,000 students and that number is to increase significantly, as the Foundation also launched a new tier to its programme, wherein for the 2018/19 academic year, at the CSEC level, N.C.B.F will support Information Technology and two other non- traditional subjects. According to Reid, this revision is in line with the changing demands of certain industries and the need for diversity in the local workforce today.

Also, excited about this programme is the Ministry of Education.

“The government itself has put in place initiatives to help students wanting to further their education, but we are especially delighted when corporate brothers and sisters such as the N.C.B.F. commit to providing bursaries to help students pursue their academic dreams,” said Dean-Roy Bernard, Permanent Secretary, Ministry of Education. “What [NCB is] doing today will catapult our students to make Jamaica, the Jamaica that we want it to be; an island of prosperity and economic stability,” he added.

The evening’s proceedings were ably guided by TV personality Emprezz Golding, who opened the ceremony with positive thoughts and maintained that atmosphere throughout. JC Fifth formers, David McKenzie and Travelle Thompson even won prizes from the Permanent Secretary and other sponsors. McKenzie went home with $1000 from the PS, while Thompson won $4000, plus a gift voucher courtesy of Island Grill as well as $3000 from the PS for finishing this Marcus Garvey quote, “Never forget that intelligence rules the world and ignorance carries the burden. Therefore, remove yourself as far as possible from ignorance and seek as far as possible to be intelligent.”

The two young men, along with Norman Manley High School student Keisia Jackson joined the officials for photo opportunities during the transfer, which preceded a heartfelt vote of thanks by Oquendo Bernard, JC Head Boy.

NCB Foundation appeals to schools to apply for CSEC bursary