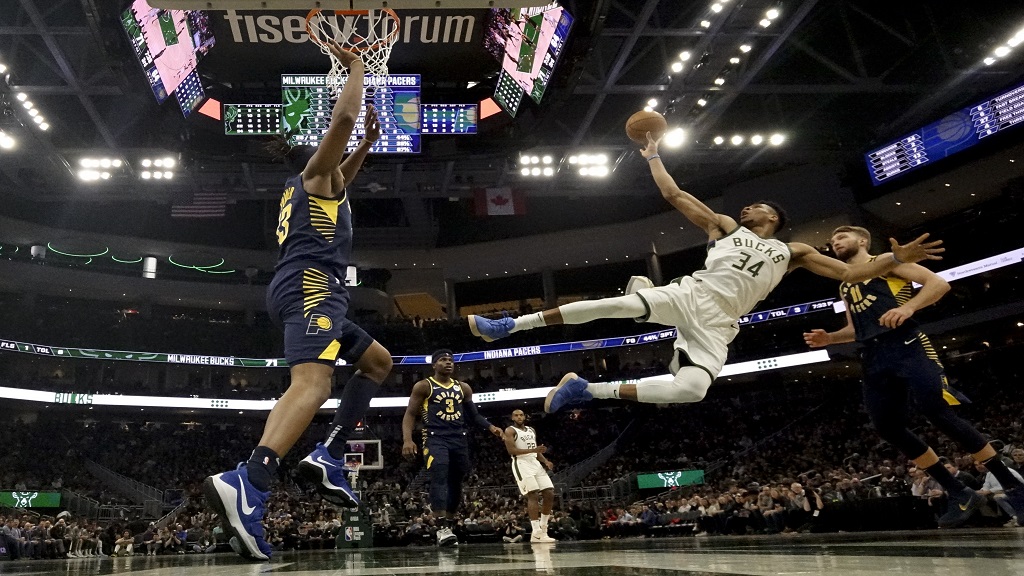 Milwaukee Bucks' Giannis Antetokounmpo shoots after being fouled during the second half of an NBA basketball game against the Indiana Pacers Wednesday, March 4, 2020, in Milwaukee. The Bucks won 119-100. (AP Photo/Morry Gash).

Giannis Antetokounmpo starred and the NBA-leading Milwaukee Bucks bounced back with a 119-100 victory over the Indiana Pacers.

The Bucks were swept aside by the Miami Heat on Monday but Antetokounmpo and Milwaukee returned to winning ways on Wednesday.

Antetokounmpo – held to 13 points in Miami – posted 29 points, 12 rebounds and six assists against the Pacers midweek.

Khris Middleton contributed 20 points as the Bucks, who have not lost back-to-back games all season, improved to 53-9.

Mavs team-mate Kristaps Porzingis – the first player with back-to-back games of 30-plus points and five or more blocks since Shaquille O'Neal in 2000 – put up 34 points and 12 rebounds, while Pelicans rookie Zion Williams scored 21 points and Brandon Ingram had 27.

Collin Sexton posted a career-high 41 points in the Cleveland Cavaliers' 112-106 loss to the Boston Celtics. Sexton has tallied double-digit points in 33 consecutive games. Jayson Tatum had 32 points for the Celtics.

The New York Knicks lost 112-104 against the Utah Jazz but Julius Randle had 32 points and 11 rebounds.

Nicolo Melli had a tough night for the Pelicans. He was just one of nine from the field and one of seven from three-point range for three points in 26 minutes. Mavs forward Maxi Kleber was two of eight from the field, while he only made one of his four attempts from beyond the arc in a five-point display.

The Brooklyn Nets endured a forgettable outing. Brooklyn were just 30 of 90 from the field as a team in their 118-79 humbling at the hands of the Memphis Grizzlies. Spencer Dinwiddie headlined Brooklyn's woes with four points after going one of nine from the field, while missing all seven of his three-pointers.

All eyes will be on Thursday's clash between defending champions the Toronto Raptors (43-18) and the Golden State Warriors (14-48). That is because Warriors star Stephen Curry will make his long-awaited return from injury. The two-time MVP has been sidelined since October due to a broken hand.