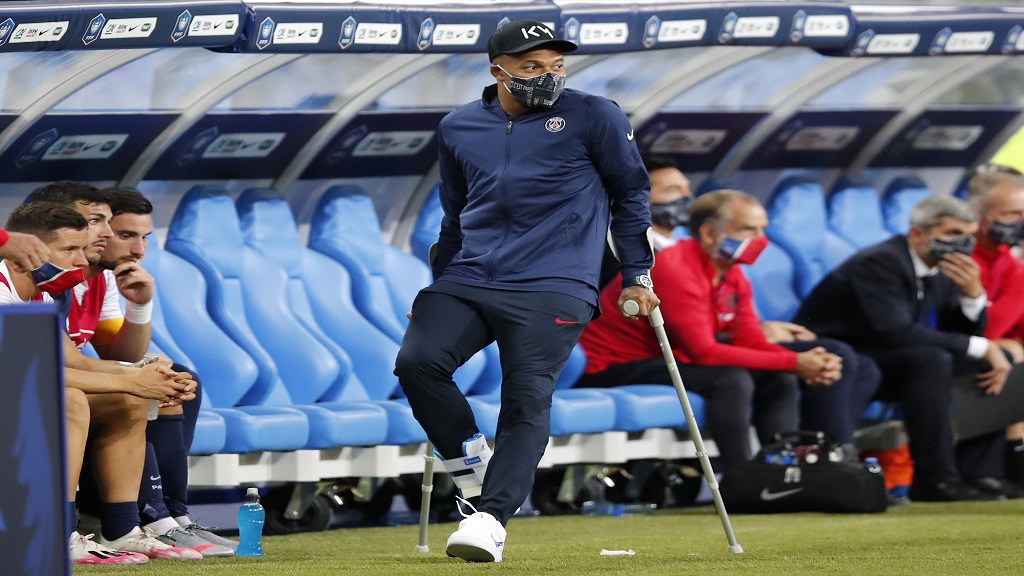 Paris Saint-Germain's (PSG) preparations for the Champions League restart were dealt a blow when striker Kylian Mbappe limped off in the first half of a fiery Coupe de France final on Friday.

The striker was forced off with an apparent ankle injury following a cynical tackle that earned Saint-Etienne captain Loic Perrin a red card.

Mbappe was scythed down by Perrin as he was about to sprint away from the defender at full tilt, sparking a mass melee with PSG leading 1-0 just before the half-hour mark at Stade de France.

Perrin was initially shown a yellow card, but that was changed to a red after referee Amaury Delerue had another look at the challenge on a pitch-side monitor.

France striker Mbappe looked in considerable pain and could not continue following treatment at the side of the field in the first competitive game of professional football in France since the season was suspended in March due to the coronavirus pandemic.

Delerue also dished out four yellow cards as tempers flared following the incident, which came after Neymar had given the Ligue 1 champions the lead.

PSG, who also lost Thilo Kehrer to an early injury, face Lyon in the Coupe de la Ligue final next Friday and will head to Portugal for the latter stages of the Champions League at the start of August.

Thomas Tuchel's side has been drawn against Atalanta in the last eight in a one-off tie that will take place on August 12.

Mbappe to stay at PSG next season 'no matter what'

Mbappe and Neymar are 'very happy' at PSG, says Herrera

Biden twists ankle while playing with dog, visits a doctor

Not all police killings are extra-judicial acts, says Chang

'I’ve had enough': Kyle Butler says he has endured years of abuse