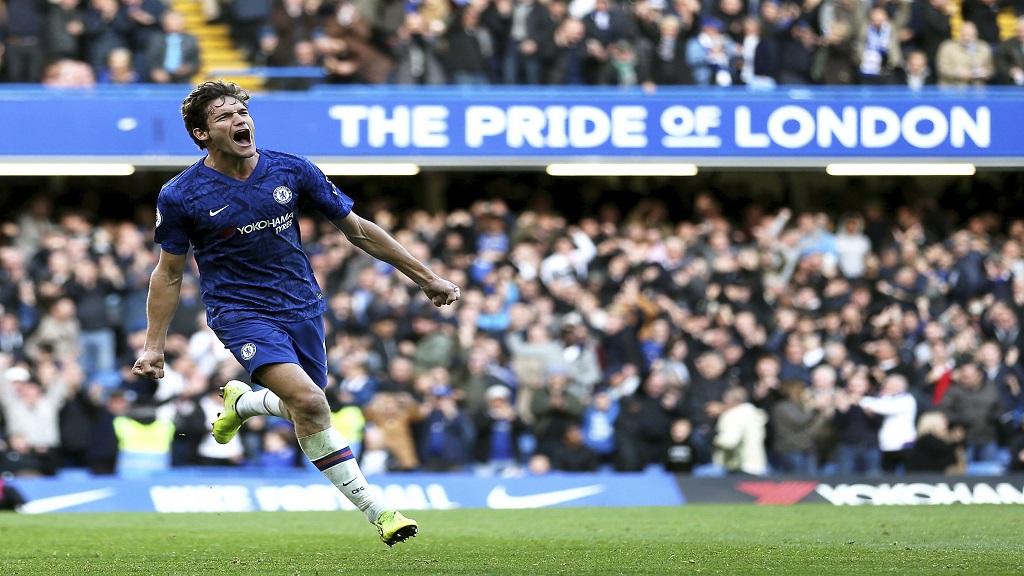 Marcos Alonso found a way through Newcastle United's resolute defence to give Chelsea a hard-earned 1-0 win at Stamford Bridge in the English Premier League (EPL) on  Saturday.

The vigour evident in a 4-1 victory over Southampton a fortnight ago largely eluded Frank Lampard's men on their return from the international break but inspiration eventually arrived in the 73rd minute.

Left-back Alonso steadied himself and unleashed a clean strike that proved too powerful for Martin Dubravka, who had not long earlier denied substitute Christian Pulisic at close range.

The victory, Chelsea's fifth straight in all competitions, lifts the Blues to third in the Premier League, at least until Manchester City's visit to Crystal Palace later on Saturday.

Callum Hudson-Odoi provided Willian with an inviting header early on then teed up a chance for Mason Mount, who fired straight at Dubravka.

Chelsea otherwise struggled to carve open Newcastle in the first half and lost Ross Barkley just before the break, the midfielder unable to shake off the effects of Ciaran Clark's firm challenge in the second minute.

Kept quiet for close to an hour, Tammy Abraham almost scored the opener when his header from Willian's corner skimmed off centre-back Clark and against the woodwork.

The striker went close from another set-piece before Pulisic squandered a chance to make himself the hero, Dubravka smothering a scuffed finish at close quarters.

The Magpies goalkeeper passionately celebrated the save but was soon left to rue his inability to get a stronger hand to Alonso's low, match-winning drive.

What does it mean? Experienced heads on hand to assist next generation

The excitement around Chelsea this season has centred on a host of impressive homegrown youngsters, but frustrating outings for Mount and Abraham meant others needed to step up to see off the Magpies.

Alonso delivered, keeping his cool with a rare chance and, along with a hard-working Willian, proving the more senior figures at Stamford Bridge still have real value to add.

Four members of the most recent England squad featured in Chelsea's starting XI and it cannot be long before Hudson-Odoi returns to the senior national team too.

The young winger was the liveliest player on the pitch at Stamford Bridge, turning defenders inside and out while using the ball intelligently, and it was no surprise that he had a hand in the winner.

A physically and emotionally draining few days away with England perhaps contributed to a less influential performance from the usually impressive Mount, who struggled to get involved after passing up his first-half opportunity.

Chelsea travel to Amsterdam to take on Ajax in the Champions League on Wednesday before a weekend excursion to Burnley. Newcastle return to St James' Park to face Wolves next Sunday.