KC off to flying start in Digicel Manning Cup second round 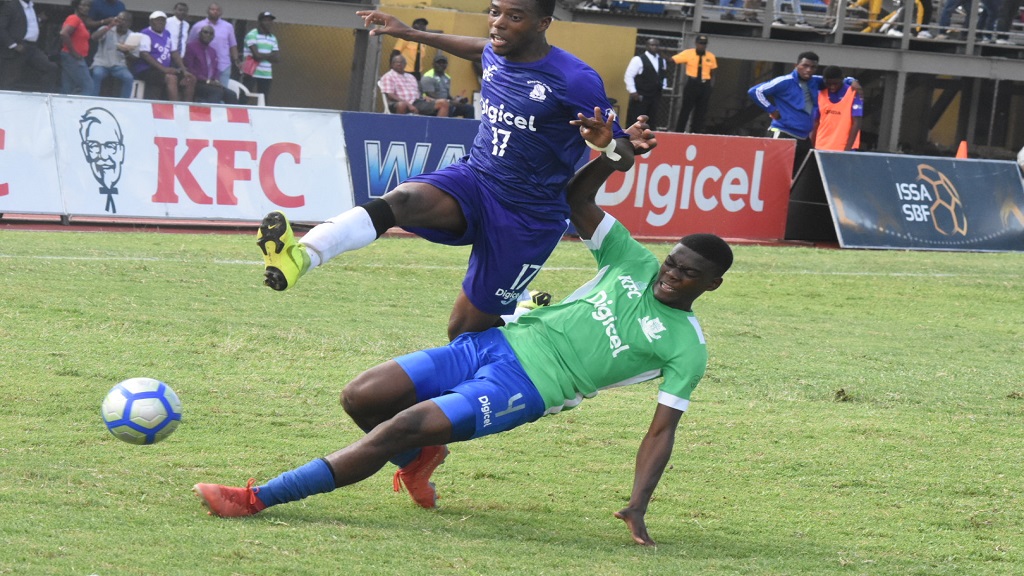 Kingston College's (KC) Sajar Blair is challenged by a defender from Vauxhall during their second round first-leg match of the 2019 ISSA/Digicel Manning Cup football competition at the Stadium East field on Wednesday, October 23, 2019. KC won 3-1. (PHOTOS: Marlon Reid).

Top seed Kingston College (KC) secured a perfect start to the second round of the 2019 ISSA/Digicel Manning Cup football competition with a 3-1 victory over Vauxhall High in the first leg of the two-way knockout fixture at the Stadium East field on Wednesday.

KC had to come from behind for the victory after Kemar Britton put 16th-seed Vauxhall High ahead in the 17th minute courtesy of a nicely placed freekick just outside the 18-yard box.

The host held the lead stubbornly to the break, but a mistake five minutes after the interval handed KC the equaliser.

Javon Shepherd scored an own goal in an attempt to heads out a ball from inside the 18-yard box, but the placement was well off and the effort lodged over goalkeeper Stephen Brightly's head at the far post. The goal came seconds after Brightly had pushed a powerful shot from KC’s leading marksman Dwayne Atkinson onto the left upright.

KC took control after the equaliser and pulled away for a comfortable victory through strikes from Ronaldo Morrison in the 71st minute, his first goal of the season, and Atkinson, who scored his 12th goal, in the 74th minute.

KC were conceding just their second goal of the season. The Ludlow Bernard-coach team conceded its first goal on September 26 in a 5-1 victory over Dunoon Park Technical at Breezy Castle in the first round where the school won all 10 matches played.

In the second match at the Stadium East field, 13th-seed Holy Trinity High and fourth-seed Camperdown High battled to a 0-0 draw in their first leg tie.

The second round of the competition is comprised of 16 teams for eight match-ups. Teams will play home and away knockout games. The eight winners will advance to the Manning Cup quarter-finals and the eight losers to the Walker Cup knockout first round.