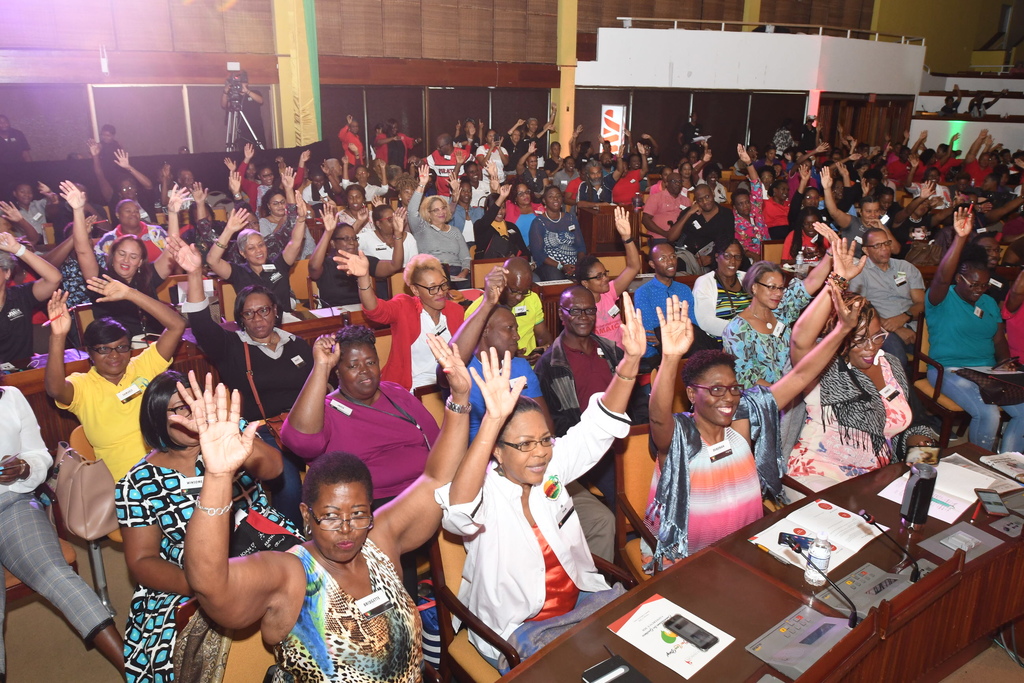 A section of the over 900 transformational leaders and ‘leaders in the making’ is seen here raising their hands in commitment to transforming their lives and communities using the tools and principles shared during the transformational conference hosted by the JMMB Joan Duncan Foundation, earlier this month.

The inaugural JMMB Joan Duncan Foundation conference, which took place recently, was an energy-field for the nearly 900 transformational leaders and ‘leaders in the making’, who chose to participate in the all-day conference, at the invitation of the foundation, having been beneficiaries of its support.

The event was held at the Jamaica Conference Centre, under the theme, ‘Writing our One Love Story’.

As attendees streamed in with great expectancy, to unearth their greatness, they immediately engaged in the unique ice-breaker, created to set the tone for the conference.

Each individual wrote a core value on their name tag and then engaged with fellow participants with the same value to share insights about the chosen value and its significance. This formed the framework for the conference, as individuals began to align themselves with their values and like-minded individuals.

The conference also gave the attendees, who would have initially been exposed to the principles of CFG, a deeper understanding and greater insight on how to apply these CFG tools to their own lives and communities.

Patricia Sutherland, chairman of the foundation, in her opening address, charged the audience of community groups; youth organisations; service clubs; non-governmental organizations; educational institutions; and charitable organizations, among others, “to give others the permission to shine, by unearthing the greatness in oneself and by being true to who you are.” 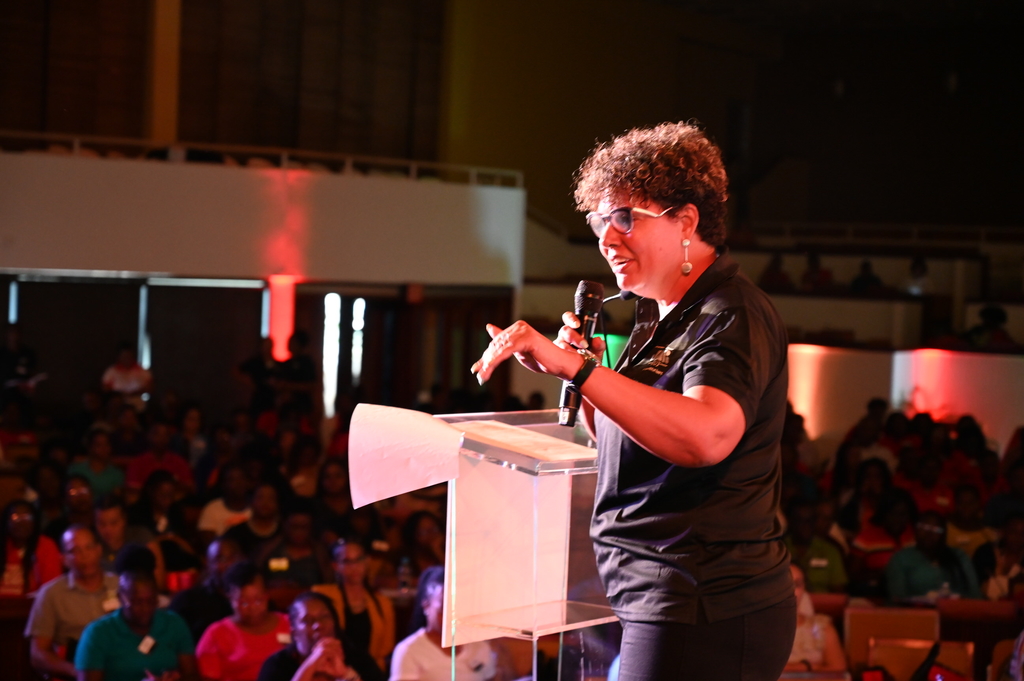 In explaining the genesis of Conversations for Greatness, she said: “We were deliberate in choosing to address the need for mindset change and transformation in our schools so that our children can realize their greatness because it is only by starting with our young people and transforming our communities from the inside out that we will be able to create the kind of society that we want.”

The conference was also a space for collaboration and open conversation; which allowed participants to share their challenges and work towards solutions for transforming their lives and communities, in an engaging and relaxed atmosphere.

The groups were encouraged to continue to create strong bonds by the facilitators who charged the attendees, during the breakout sessions, to identify accountability partners that would be able to provide them with the necessary guidance and ensure they sustained their path of transformation – on a personal and broader level.

Dr Dalea Bean, lecturer at the Institute for Gender and Development Studies, Regional Coordinating Unit at The UWI and president of Kiwanis Club of Young Professionals, Kingston, underscored the strong synergies created at the conference, noting, “It was amazing to have such a diverse room of individuals, from all walks of life, coming together for the conference with a similar vision and purpose. It provided such a great opportunity for synergy and a sense of ‘oneness.’

CEO of the Foundation, Kim Mair, outlined that her organisation intends to continue to build on the momentum, by creating a space to allow individuals to take part in the ‘big picture’ of transforming Jamaica.

In further sharing details of the plan, she said, “Working as a team, we intend to facilitate support systems to help guide the process and the networks that have been developed through the conference and foster the positive results that have been seen in the schools, in which the CFG programme has been implemented.  We are all about helping individuals to ‘write their love story’, and uncover their greatness.”

The foundation also used the occasion to recognise an outstanding school and teacher who consistently practised and demonstrated the use of the CFG principles.

In addition to the awards, the school will receive a donation of a computer, courtesy of Royale Computers and Accessories. Other schools were also acknowledged for participation in the conference.

The event culminated on a high note with Rondell Positive’s performance, complemented by his fitting charge to “look in the mirror and seek to be the change you want to see in our society.” His presentation was a fitting crescendo, further igniting the passion in the audience, and really tapped into the true essence of Foundation’s Conference -  to empower the attendees to be deliberate in “writing their own love story’ and being intentional and taking responsibility for shaping the future they wanted.

Coronavirus cases in the Caribbean to date: 3,565