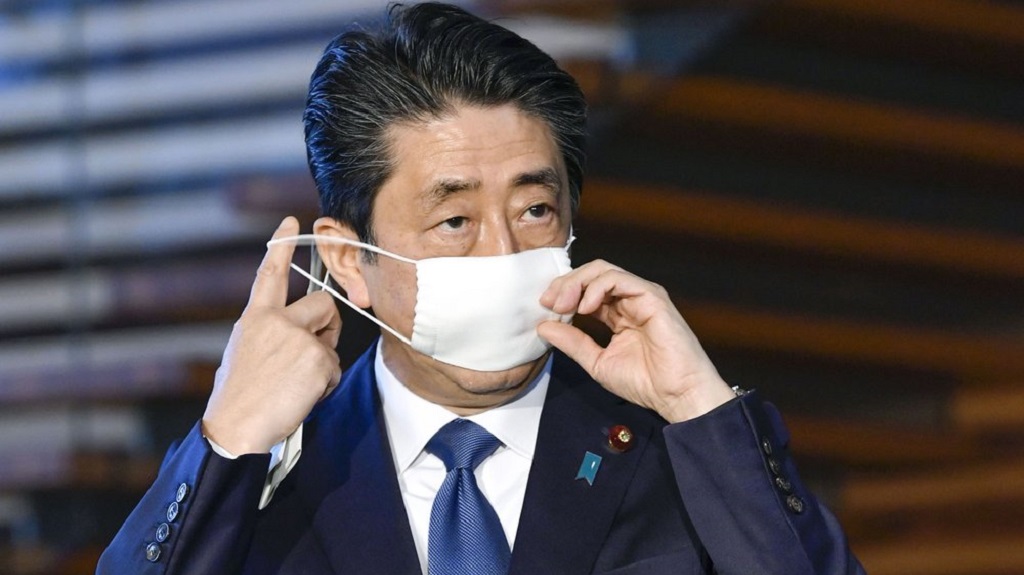 Japan's Prime Minister Shinzo Abe declared a month-long state of emergency Tuesday for Tokyo and six other prefectures to ramp up defences against the spread of the coronavirus as cases rise.

But the move came in the form of a stay-at-home request — not an order — and violators will not be penalized.

The COVID-19 outbreak is now rampant and rapidly spreading, threatening people's health, their daily lives and the economy, Abe said. The state of emergency is until May 6.

The state of emergency will only permit Tokyo Gov. Yuriko Koike and heads of the six other prefectures to do more to reinforce calls for social distancing.

"The most important thing is for each one of us to change our activity," Abe told a government task force. He urged everyone to cut contacts with others by 70-80% for one month.

The announcement follows surges in new cases in Tokyo, including consecutive rises exceeding 100 over the weekend.

By Monday there were 1,116 confirmed cases in the metropolitan region of 14 million people. Nationwide, Japan has reported 91 deaths from COVID-19 and 3,906 confirmed cases, plus another 712 from a cruise ship that was quarantined earlier at Yokohama port near Tokyo.

Abe has been under pressure to declare a state of emergency to get better compliance with calls for social distancing amid rising alarm over the number of cases without any known contact with other patients.

Tokyo Governor Yuriko Koike welcomed the emergency measures, saying she expects they "will prevail widely and deeply among the people."

Japan's limits on official action during a state of emergency stem from its experience with repression and disasters stemming from fascist governments before and during World War II.

The public is doubly wary due to the push by Abe's ultra-conservative ruling party and its supporters for a Constitutional amendment to include a state of emergency clause for disaster and wartime contingencies.

Abe's government is thought to have delayed declaring a state of emergency out of fear of how it might hurt the economy.

But as fear of the pandemic has grown, the public and medical experts have increasingly supported taking more drastic action.

The state of emergency includes a stay-at-home request; guidance to schools on temporary closures and requests to close non-essential businesses and stores and to cancel or postpone events and exhibits. Violators cannot be penalized unless they fail to comply with orders on providing or storing emergency relief goods, such as surgical masks and medical equipment.

Still, the state of emergency could significantly limit movement of people around and out of the city.

Takahide Kiuchi, an economist at Nomura Research Institute, said in a recent report that a state of emergency could cause consumer spending to fall nearly 2.5 trillion yen ($23 billion), leading to a 0.4% drop in Japan's annual GDP.

The government overcame controversy over risks to civil rights to gain approval of a special law last Month enabling Abe to declare a state of emergency.

Earlier, Japan sought to curb infections by closely monitoring clusters of cases and keeping them under control, rather than conducting massive testing as was done in neighbouring South Korea.

That strategy appears to be failing given the sharp rise in cases not linked to previous known infections.

As is true in many places, there are fears over shortages of beds and ICU units for patients with severe symptoms.

Osamu Nishida, chairman of the Japanese Society of Intensive Care Medicine, noted that Japan has only five ICU beds per 100,000 people, compared to 12 in Italy and about 30 in Germany.

Abe has said the central government has secured 25,000 beds and 8,000 ventilators. The health ministry also eased hospitalization requirements for patients with no symptoms or only slight illnesses, allowing their transfer to hotels and other designated lodgings where they can be monitored by medical workers. That should free up beds for the severely ill, helping ease the strain on the medical system.

Japan PM to declare state of emergency as early as Tuesday