Jamaica Open to be staged at Tryall Golf Club 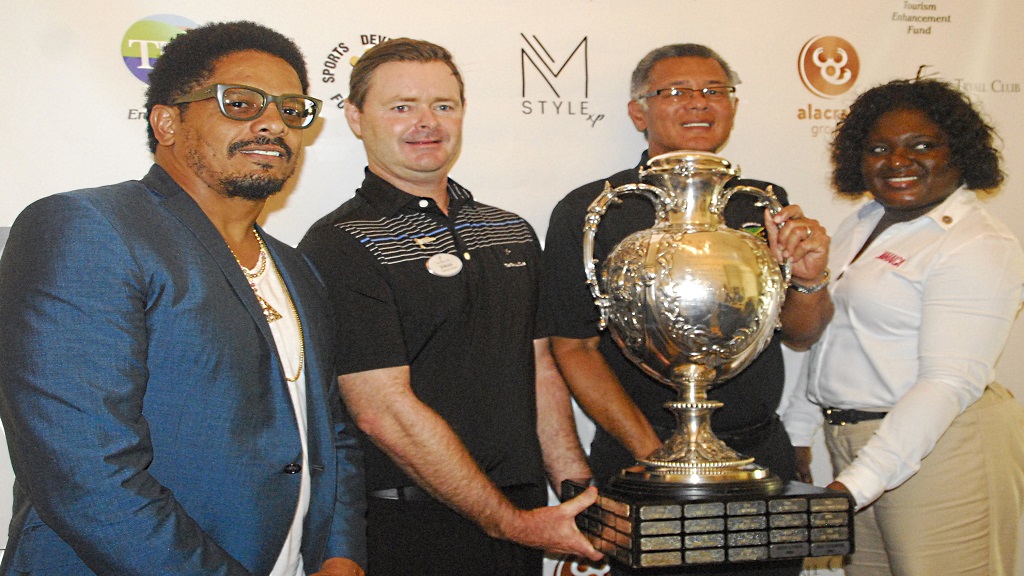 From left: Rohan Marley, co-chair of major sponsor Alacran Foundation; Ewan Peebles, director of golf at Tryall Club; Peter Chin, president of the Jamaica Golf Association and Carlene Moore, a representative from the Jamaica Tourist Board and the Tourism Enhancement Fund, pose with the Jamaica Open trophy during the tournament launch at the Tryall Club.

International golf will return to the Tryall Golf Club in Hanover with the staging of the 52nd Jamaica Open from December 11-14.

Details of the championship were announced during the launch on Tuesday at the Tryall Club.

President of the Jamaica Golf Association (JGA) Peter Chin was pleased with the idea of staging the championship at the iconic Tryall Club.

Chin said, "the Jamaica Golf Association is extremely pleased that we are partnering with Tryall this year to host the Jamaica Open at the Iconic golf course down in Hanover.

Director of Golf at Tryall Ewan Peebles said, "we are delighted to host the Jamaica Open.  It's the first time we are hosting this event and frankly, it's overdue.  With our history of tournament and championship golf, it's about time we hosted the National Open. It will be the first time we have done it and hopefully, it will not be the last."

Pebbles pointed out that the par 72 course is expected to be in good shape for the tournament following a three-year upgrading of the course, which was recently completed.

The tournament is expected to feature over 100 professional and amateur golfers, who will be competing for over US$100,000 in cash and prizes.

The first day on December 11 will feature a Pro-Am tournament, followed by the official opening in the evening.

Professional golfers will take to the course on December 12 in a three-day 54-hole tournament.

The tournament will feature golfers from the United States, the United Kingdom, Canada, Cayman Islands, Trinidad and Tobago, and Antigua and Barbuda.

American Hernan Borja won the championship when it was last staged in 2017 at Half Moon Golf Club with a score of nine-under-par 207.  The amateur section went to Jamaica's Justin Burrowes, who was 16-year-old at the time.