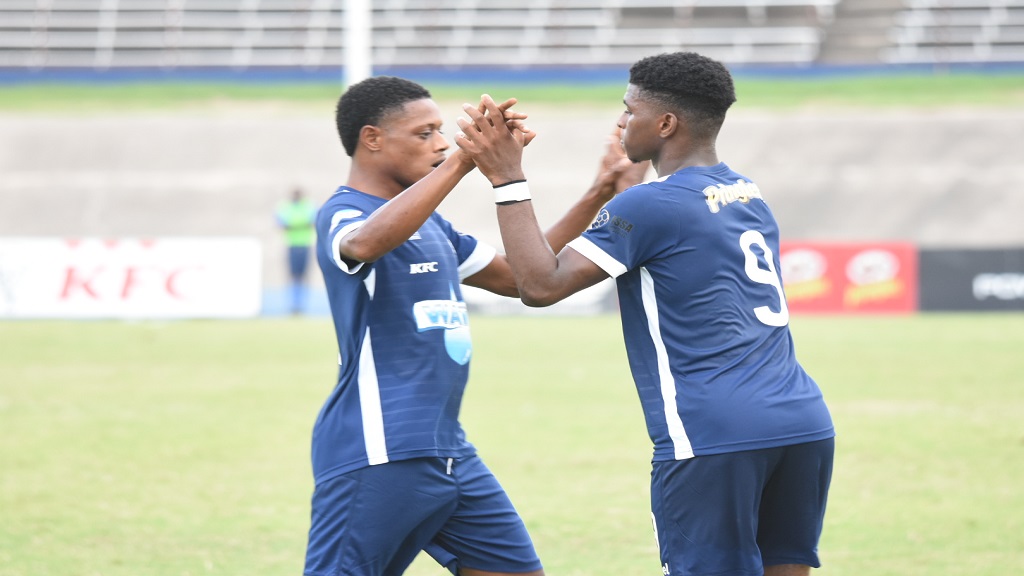 Jamaica College's Alvarez Cooper (right) celebrates one of his goals with a teammate during their Round of 16 match against McGrath High in the 2019 ISSA all-island Champions Cup knockout competition at the National Stadium on Saturday, October 2. JC won 7-0. (PHOTOS: Marlon Reid).

Frome Technical and St Andrew Technical High School (STATHS) also progressed out of the Round of 16 to the quarterfinals, while St George's College, the 2015 champions, were leading B B Coke 3-2 over at St Elizabeth Technical High School when the game was called off after 56 minutes due to a waterlogged field. That game will resume on Monday at 1:00 pm.

JC, which won the inaugural title in 2014 when the competition was called Super Cup before it was rebranded in 2018 to Champions Cup, scored the biggest victory on the day by hammering McGrath High 7-0 in the first match of a doubleheader at the National Stadium in Kingston. 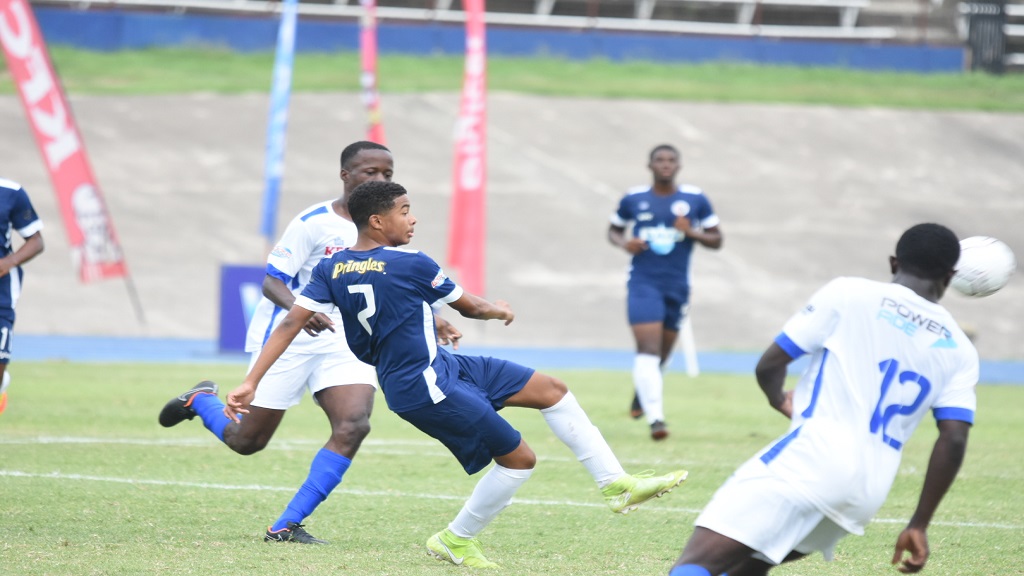 Action from the Round of 16 match between Jamaica College and McGrath High.

Phillon Lawrence led the 'Dark Blues' with a hat-trick, while Alvarez Cooper scored a brace in the 45th and 50th minutes.

Oquassa Chong, who began the rout for JC in the 12th minute, and substitute Shadane Lopez (85th minute) scored the other goals.

Lawrence, formerly of Holy Trinity High,  found the back of the net in the 15th, 48th and 61st minutes.

In the second game of the doubleheader, KC scored a comfortable 2-0 victory over Garvey Maceo High with striker Dwayne Atkinson netting both goals in the first half.

The victory stretched KC’s perfect record to 14 games this season. The 'Purples' have won 13 straight games in the ISSA/Digicel Manning Cup competition, where they are the reigning champions.

Over at the at Montego Bay Sports Complex, Cornwall College left it late to beat Charlie Smith High 1-0 in the night game.

The hero for Cornwall College was Brandon Curate, who drilled a stunning 30-yard free-kick past goalkeeper Tuishane Edwards in added time with the game heading to penalty kicks.

Cornwall College dominated the game but Charlie Smith High, which were hammered 5-0 by KC on Thursday in the quarter-final round of the Manning Cup competition, defended stoutly in an attempt to take the game into the dreaded penalty kicks.

In the curtain-raiser at the Montego Bay Sports Complex, STATHS came from a goal down to beat Manning’s School 2-1.

The hero for STATHS was substitute Steven McQueen, who scored in time added with the game heading to penalty kicks.

Shaquille Grey had given Manning’s School a first-half lead but Rusean McFarquhar pulled STATHS back level midway the second half.

Excelsior High and Clarendon College secured their spot on Friday.

The Champions Cup comprises the eight teams that finished as winners and runner-ups in their respective rural area Wata daCosta Cup quarter-final groups along with the eight quarterfinalists from the urban area Digicel Manning Cup competition.

The draw for the quarter-final matches is scheduled for Monday.

Fourth bike fatality in Hanover within a week