Hot in 2019: Britany Anderson's U20 hurdles record was special 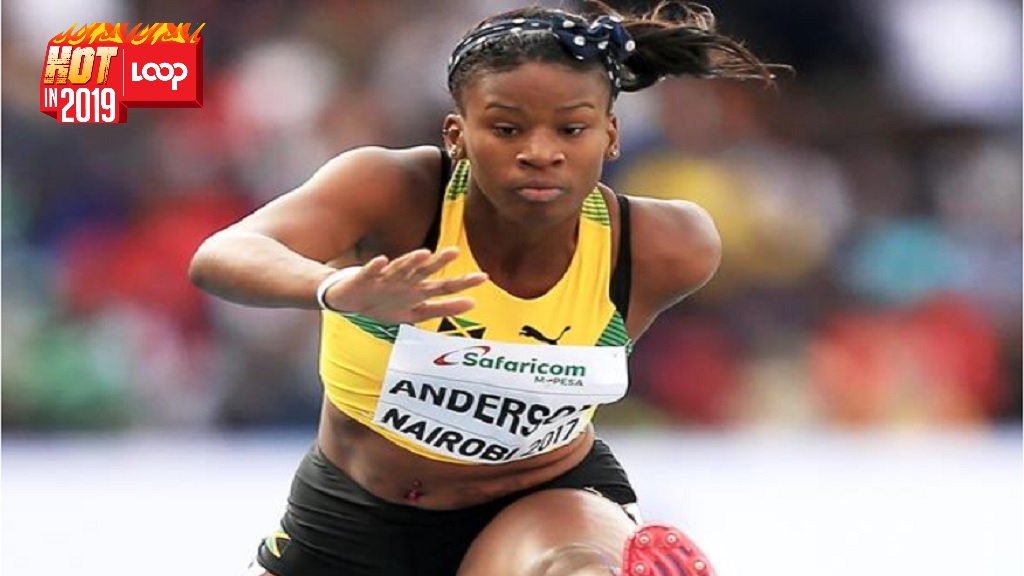 Britany Anderson on her way to winning the 100m hurdles at the IAAF World U18 Championships Nairobi 2017. (PHOTO: IAAF).

As 2019 draws to a close, we’re continuing our annual tradition of celebrating the hard work that sports persons and teams achieved in the past year.

Among the big sports stories were Shelly-Ann Fraser-Pryce winning her fourth world championship gold medal in the 100 metres, 10 years after her first,  in Doha, Qatar and sprint hurdler Britany Anderson beating a world Under-20 record.

The year will also be remembered for Jamaica’s newest star, Tajay Gayle, who produced the jump of his life, the 10th best of all-time, to win the men’s long jump at the World Athletics Championships Doha 2019.

So grab a beverage of choice and let's take a trip down 2019 memory lane!

Had it not been for a strong 4.1m/s following wind – a breeze so strong it could well have been as much of a hindrance as a help – at the World U18 Championships in Nairobi two years ago, Anderson’s winning time of 12.72 in the 100m hurdles there would have been a significant improvement on the world U18 best.

A strong tailwind, this time 3.1m/s, denied her a potential world U20 record earlier this year at La Chaux-de-Fonds as she stopped the clock at 12.77.

The world U20 record had been held by Cuba’s Aliuska Lopez for 32 years at 12.84, but several prodigious sprint hurdlers bettered that mark in recent seasons – Dior Hall (12.74), Tobi Amusan (12.83) and Chanel Brissett (12.75) – only to later discover that their performances didn’t meet all the criteria for ratification. A handful of other U20 athletes had clocked times quicker than 12.84 but in wind-assisted races.

After her performance in La Chaux-de-Fonds, Anderson was determined not to end up on the ‘so-near-but-so-far’ list of performers.

The Jamaican teenager had twice bettered Lopez’s world U20 record, but as numerous other athletes knew all too well, her performances would come with the all-important caveat: “subject to the usual ratification procedure”.

Thankfully for Anderson – and for athletics statisticians around the world – her times were ratified a couple of months later and she officially became the world U20 record-holder.

“I was so, so, so happy,” she recalls of her competition in Joensuu. “That was one of the happiest moments of my life. When I went home, I got calls, text messages and Instagram messages. There was so much love and I was really, really happy.”

What makes Anderson’s 2019 all the more impressive is the uncertain start to her year.

Hamstring injuries meant she was unable to compete as often as she’d have liked in the first few months of the year, a time when many of the Jamaican age-group championships are held. She ended her truncated domestic season with a best of 14.07.

“My season wasn’t the best,” she says. “When I left Jamaica to find a new coach, I just wanted to start running and competing again.”

She joined Rana Reider’s all-star group of international sprinters and hurdlers and in time she recovered from her hamstring problems, resulting in her brief – but nonetheless impressive – European racing campaign.

“It’s fantastic being in that group, I love the support,” says Anderson, who trains alongside the likes of Olympic 110m hurdles champion Omar McLeod and world 100m hurdles champion Nia Ali. “I love each and every one of them, especially Rana; he has taught me a lot.

“Breaking the world U20 record after being injured at the start of the year gives me a lot of confidence that I can run faster next year,” she added. “The speed is there, but I need to work on my technique.”

Anderson, who was shortlisted for the 2019 World Athletics Rising Star of the Year award, arrived in Monaco for the recent World Athletics Awards with coral-coloured hair. So when she was asked who her athletics inspiration is, her answer came as no surprise.

“I really look up to Shelly-Ann Fraser-Pryce,” says Anderson, who started out as a sprinter and long jumper. “And Nia Ali.”

Even though it was her first major international success, Anderson admits she doesn’t remember much about the World U18 Championships in Nairobi in 2017. But as she’ll still be in the U20 ranks next year, she’ll have the opportunity to return to the Kenyan capital in 2020 for the World U20 Championships.

“I am planning on competing in Nairobi next year,” she says. “I’d also like to compete at the World Indoor Championships, but I don’t know for definite if I’ll be there.”

At the 2018 World U20 Championships in Tampere, Anderson missed out on the gold medal by the narrowest of margins. Her time – down to the thousandth – was the same as eventual winner Tia Jones, the pair clocking 13.01. But the photofinish equipment was able to split the two runners and so awarded Jones the gold medal.

Anderson, however, will have the opportunity to improve on that finishing position in Nairobi next year. And hopefully this time the conditions won’t deny her another shot at improving on a world record.

Stay in the loop for other trip down 2019 memory lane!

Fraser-Pryce is Athletics Weekly's Female Athlete of the Year