Holness blasts commentators for doom and gloom outlook on country

Prime Minister Andrew Holness (centre), along with Minister of Transport and Mining and Western St Mary Member of Parliament (MP), Robert Montague (right), cut the ribbon to officially open the Gayle Police Station and Multi-Purpose Centre in St Mary on Friday, July 10. Looking on is Assistant Commissioner of Police in charge of Area Two, Elbert Nelson.

Prime Minister Andrew Holness has lambasted persons who he described as holding "the privileged position of opinion leaders and commentators", whose utterances he said have created the portrayal that Jamaica is on the brink of a collapse.

Further, Holness argued passionately and sometimes fiercely, that those privileged persons in local media have continuously highlighted the negatives in Jamaica, leading to a culture of anti-government and anti-co-operation.

The Jamaica Labour Party (JLP) leader, however, said he was not suggesting that the negative news in the society, including murders, should not be reported, but said there should be a balance wherein the positive happenings within the country are also highlighted.

Speaking at the official opening of the Gayle Police Station and Multi-Purpose Centre in St Mary on Friday, Holness told residents and other stakeholders that there are many public commentators who insist that no progress is being made in the country.

He sought to outline the characteristics of the opinion leaders and commentators whom he was focussing on.

To bring across his point about the influence of some "privileged" persons in media, the prime minister said while he was a student at the University of the West Indies (UWI), Mona, an African student was seen packing up to leave the campus because of the crime reporting that he had constantly heard on the radio.

"And I remember that he (the African student) had started the course maybe three or four days and then on the weekend I noticed he was packing up to leave, and I was curious because the course wasn't finished," Holness related.

"So I asked him, 'Why (are you leaving?'). And he said that every day that he listened to the radio there was a report, 'Man shot and killed'; a report of all the violence taking place in the country, and all the people who were dying. He got scared and he said, 'No, I can't stay in this country. I have to leave'.”

Holness continued that: "So I said to him, 'You're right. If you just listen and come to Jamaica and you don't know the country and you listen to just the reports that are on the radio and the TV, you could easily come to the conclusion that you could be next or (it is) right at your doorstep."

The prime minister insisted that a balanced view of Jamaica needed to be portrayed in the local media landscape.

In arguing about his decision to visit the small community of Gayle to open what some may view as a "fairly standard facility", Holness said "It was to make a point that positive things, great things are happening right across Jamaica in large communities and in small communities. Great things are happening across Jamaica in communities that are gripped by crime, but also in communities that have been peaceful and at one with themselves, like the community of Gayle."

He said the newly-constructed multi-purpose centre in Gayle, which was a project under the Citizen Security and Justice Programme (CSJP), would facilitate the offering of skills training to residents.

"In collaboration with HEART/Trust, various skills training programmes will be offered at the facility, including commercial food preparation, data operations and training for the business process outsourcing (BPO) sector," said Holness, adding that the centre is to be managed by a committee from the community. 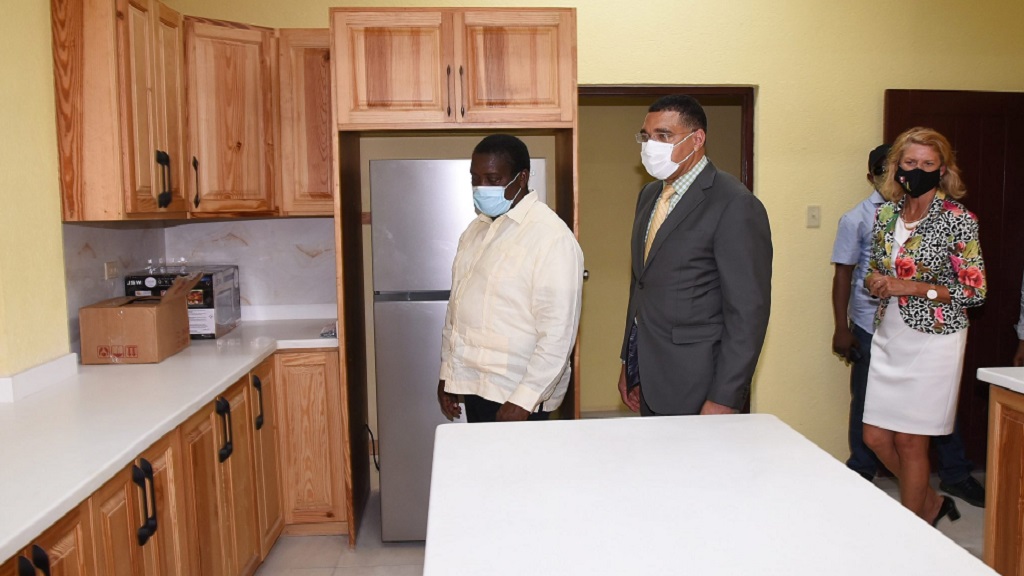 With the presence of the police station at the centre, Holness said, "This is a very positive development that will enhance community police relations. It will promote constructive dialogue on community concerns in the course of defining community solutions within the context of community governance."

The infrastructure development at the community centre facilitated the relocation of the Gayle Police Station from the town centre.

While chiding critics who have been questioning whether or not the Government has a crime plan, Holness said in addition to enhancing security measures, investments such as the infrastructures in Gayle will help to lower the crime rate in the long-term.

He elaborated that, "When the people of Gayle come for whatever reason that they need to access police service, they can access it in an environment that is conducive to reason and peace... And that is part of the crime fighting strategy, and that is why we make the investment. But these investments don't bring peace overnight. It takes time for the infrastructure to impact on behave."

Holness further stated that "these investments take time to change the nature of violence in our society, but they must be made."

With general elections - constitutionally due next February - clearly on his mind, Holness highlighted too, that "the problem with these investments is that the public will not vote on them".

The reason behind this, he said, is "because nobody tells them (the citizens) about it".

Added Holness: "All the people who write columns and criticise, they are not going to come here (in Gayle), research it, see the impact of it, and then write about it. What they are going to write about and tell you every day is who got killed."

The prime minister said such contradictions in the society needed to be revealed, because positive happenings have been taking place in Jamaica.

He explained: "So I want to point out these contradictions in the society. I want to say that the people who have for years occupied the privileged position of opinion leaders and commentators, have not served us well. They have not changed their tune for 30, 40 years."

He said “Many of them have been commentators, and many of them have occupied privileged positions in this society. They have access to media, and they have not told the people the full truth of the situation of Jamaica."

He underscored that the "nutten nah gwaan" attitude does not serve the country’s interest.

“’Nutten nah gwaan' attitude doesn't serve us. Something is going on in Jamaica and this Government is making things happen in Jamaica, whether it is in rural Jamaica or urban Jamaica, poor Jamaica or rich Jamaica, peaceful Jamaica or the parts of Jamaica that are in conflict," he elaborated.

Among the things which are occurring in Jamaica, the prime minister said, has been the rehabilitation of police stations across the island, and the creation of new police posts across various police divisions. 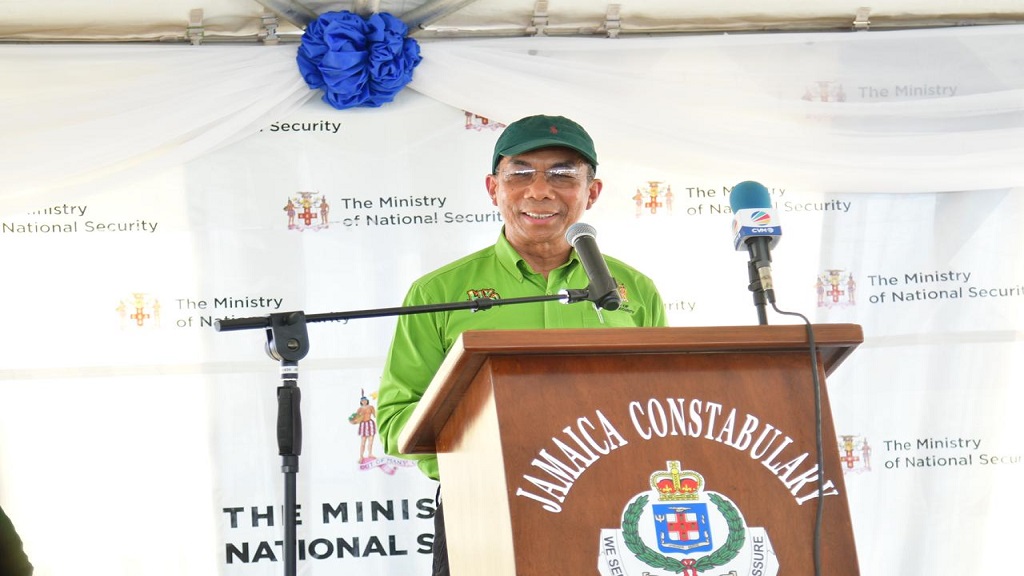 To that effect, the prime minister took a swipe at his opponents in the Opposition People's National Party (PNP), and those in the society who claim to be non-partisan, who have widely argued that nothing was being done in the country.

"In all we have gone 105 major police stations that we have repaired... Now tell me, which other administration has done that?" asked Holness, to which some members of the audience replied, "None".

He continued: "But if you listen to the narrative that the other people and those who are their proxies who parade as if they are independent and objective, you will think that nothing was (being) done."

With his campaign hat clearly on, Holness told the audience to "Remember now these are the same people who say the crime plan isn't working and we must invest in the infrastructure of the police."

He further said "We (the Government) have come and not only put in states of public emergency and Zones of Special Operations, but we have also made the budgetary allocations that they didn’t do in the 18 and a half years they had, and then four more years that they had. They didn’t do it, but we have done it."

Holness told the audience in Gayle that "the policemen and women can tell you that we have made investments in improving their working conditions."

Additionally, he shared that 20 new police stations are were to be built.

To the citizens of Gayle, the head of Government said they should focus on the positives in the country, rather than the negatives from certain commentators.

"The balance and truthful picture of Jamaica is that yes, we have problems, but yes, we are doing great things as well. Yes we are overcoming our problems every single day," he said.

This is not the first time that Holness has been critical of sections of the local media. In June of this year he dismissed critics of the Government's decision to reopen the island's borders and, essentially, the economy, amid the coronavirus (COVID-19) pandemic, describing such critical commentators and media practitioners as "armchair experts".

In defence of the move to open the borders, Holness said the Government had strategically planned the reopening of the economy, citing then that there will be risks, but measures had been put in place to mitigate any major potential challenges.

"The Government of Jamaica, you know, did not just get up one day and say, 'We're going to open up the borders. Let's be clear, the professional advice from the CMO (chief medical officer) and others is that you know, there will be risks in reopening the borders, and the numbers (of COVID-19) will rise, and we have been advised on the risk," Holness stated at the time.

A seemingly incensed Holness then lashed some commentators, describing them as “armchair experts” for what he said appeared to be their wish to have the Government keep the economy closed.

"And sometimes when I read the commentary and the articles that are written by armchair experts, it is as if the Government has a clear pathway with no risk. It is as if the Government should keep the economy closed and not have to worry about the farmer in St Elizabeth or in Westmoreland or in Manchester, who by the way, I saw today at the farmers’ market, who pointed out to me that they are not able to sell their eggs (and) sell their vegetables," argued Holness at that time.

He said the economy had to be open because many sectors depended on tourism, which could not be kept closed for very long without dire consequences for the national economy.

VIDEO: Phillips accuses JLP of 'litany of failures and disasters'