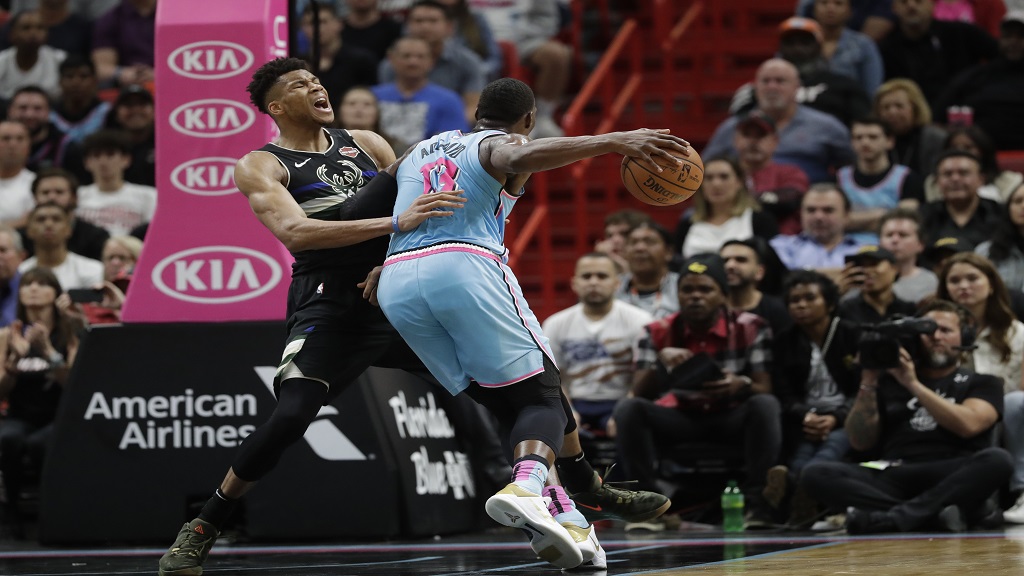 Antetokounmpo matched a season-low with 13 points on six-for-18 shooting as the Heat became the first team to beat the Bucks twice this term.

The Bucks superstar, who also collected 15 rebounds, was limited to just six points in the first half in Miami.

Eastern Conference rivals the Heat were led by Jae Crowder and Jimmy Butler's 18 points each, while Bam Adebayo added 14 points and 12 rebounds.

James Harden posted 35 points and eight assists, but the Houston Rockets lost 125-123 away to the lowly New York Knicks.

CJ McCollum put on a show with 41 points as the Portland Trail Blazers beat the Orlando Magic 130-107. Portland outscored Orlando 38-19 in the final quarter. Nikola Vucevic starred for the Magic with 30 points and 11 rebounds.

Collin Sexton had a game-high 32 points in the Cleveland Cavaliers' 126-113 loss at home to the Utah Jazz.

For someone averaging 22.6 points per game this season, Monday's performance was not up to standard for DeMar DeRozan. The San Antonio Spurs star was just four of 10 from the field for 10 points in 38 minutes of action in a 116-111 defeat against the Indiana Pacers.

The Philadelphia 76ers (37-24) will have their hands full away to LeBron James and the Los Angeles Lakers (46-13) on Tuesday. The 76ers are missing All-Stars Joel Embiid and Ben Simmons, while Josh Richardson has been ruled out with concussion. The 76ers are 9-22 on the road following their loss to the Los Angeles Clippers, while the Western Conference-leading Lakers are 21-7 at Staples Center.