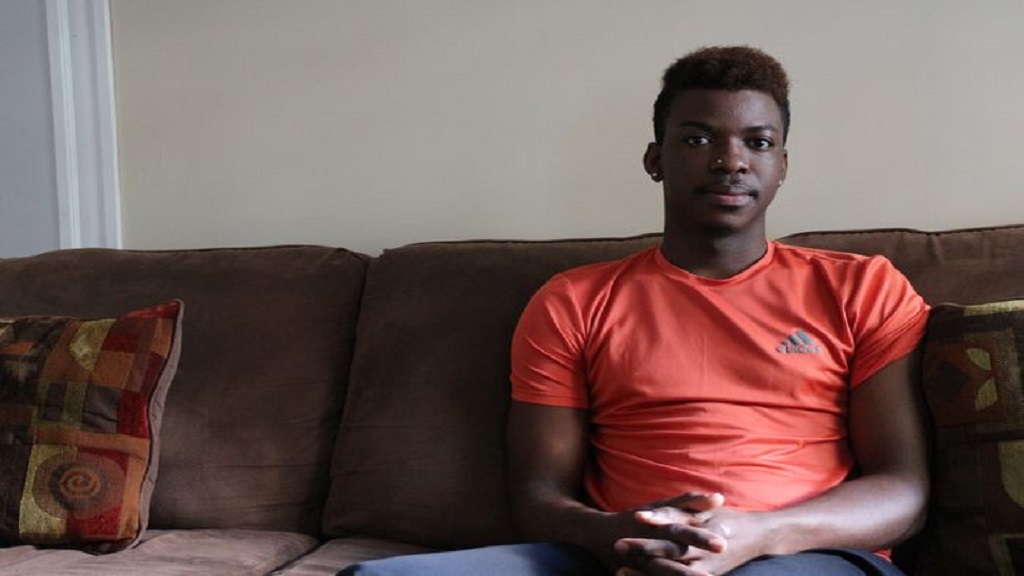 Maurice Newman, a 26-year-old from Jamaica, is seeking asylum in the United States. (Photo: Masslive)

Maurice Newman was thriving in Jamaica, fulfilling his dreams. He was teaching the fifth grade and also traveling for the government, training fellow teachers. He was building his life, living in the upper-middle class with an apartment and nice car.

Then his life flipped around in an instant when police discovered his sexuality.

"All that changed when people find out you're gay. Because in Jamaica, it's a very homophobic country. By law, being gay is illegal. You can go to prison for 10 years maximum with hard labor," Newman recalled in an interview. "That's not even scary. The scariest part is the community in which you live, in which you invested, in which you helped to develop, if those people find out that you're gay, they themselves will try to kill you and that's exactly what happened to me."

Newman, 26, said Jamaican police saw him in his car with another man. It led to a chase, where Newman said he was able to evade police.

With his sexual orientation now known, Newman avoided work the day after police discovered the truth. When he returned to work the following day, he saw a large crowd gathering and he knew authorities were after him, Newman recalled.

"I started driving out of the schoolyard when they just started throwing stones, bricks whatever they could at my car," Newman revealed.

He was certain he would be sent to jail and was worried he might even be killed. But luckily, he was able to get away.

News travels fast in Jamaica, according to Newman.

"My family started calling me, (saying), 'What did we hear? We don't want you around. Don't come back to us,'" Newman said. "My own mom told me that 'you can't come back to my house' ... it just broke me down. I knew I just had to leave."

He stayed with a friend overnight and then fled Jamaica. Newman already had a visiting visa to come to the United States, he said.

On the flight over, he asked friends if anyone knew where he could stay and they pointed him to the Worcester-based LGBT Asylum Task Force.

Discovering the task force changed everything. Newman was able to find legal resources and get a roof over his head. But, most importantly, the task force showed him acceptance and made him a part of a new community.

A ministry of the Hadwen Park Congregational Church, the task force raises money to help LGBTQ people who are seeking asylum in the United States and are there legally, likely on work, student or visiting visas.

"It's pretty much a one-stop-shop, trying to help folks to start a new life here and be successful at it," said Alford Green, the director of the task force.

Asylum seekers are people who seek protection because they have suffered persecution or fear that they will suffer persecution because of race, religion, nationality, membership of a particular social group, or political opinion.

About 1 million people seek asylum worldwide every year, according to the United Nations High Commissioner for Refugees.

Across the ocean, Michael was living in secret, much like Newman.

In Uganda, being gay is punishable by up to life in prison. So, Michael, who only wanted to be referred to by his first name to protect his identity and safety, knew he could never come out to his family, he recalled in an interview.

Michael says he was outed in the community and then was beaten.

"I was attacked in the night and these people's motive was to actually kill me," Michael said.

During the attack, Michael's father came to help.

"So when I left home a few days later, he got stabbed and he was left to bleed to death. He actually died in the hospital. I didn't know all about this until months later."

Michael went to the western part of Uganda to stay with a friend there. He was outed again and fired from his job. Then, Michael hid in the eastern part of the country, living in a small room with financial support from his sister.

He spent about a year in hiding before finally getting enough money to fly to the US on a student visa.

Michael remembered an old friend. He didn't have a phone number or street address but knew the friend lived in Burlington, Massachusetts.

After arriving at the airport, Michael took a taxi to Burlington, hoping he could knock on doors until he could find his friend. He grew tired and sat down to rest in a random driveway, he said. When a Burlington resident returned home and saw Michael in her driveway, he shared his story out of desperation, Michael recalled.

That woman took Michael in for a few days and then remembered a Ugandan woman who braided hair in town. That woman knew Pastor Judith Hanlon from the Hadwen Park Church. Hanlon picked Michael up so he could receive help from the task force.

The LGBT Asylum Task Force was created in 2008 when a gay Jamaican asylum seeker was having trouble preparing for his case. He was homeless and hungry and "had doubts as to whether or not God loved him as a gay man," Green said.

Seeking asylum is a lengthy process, but one LGBT individuals are willing to wait out.

According to the International Lesbian, Gay, Bisexual, Trans and Intersex Association, known as the ILGA, same-sex acts between consenting adults are criminalized in 70 countries.

On average, asylum seekers getting approval to legally work in the US wait eight months to 18 months. To get their case adjudicated, some are waiting 6 years, according to Green.

Since 2008, the LGBT Asylum Task Force has helped more than 200 people from more than 20 countries, Green said.

"One of the things that I think is pretty telling about the importance of the work that we do is that every person that we've helped so far who's got to the stage of having their asylum hearing has been successful. A 100 percent success rate," said Green, who noted that because the task force provides housing and a stipend, it gives asylum seekers ample time to prepare a solid case.

The task force took on Newman's case in May and has housed him in a Worcester three-decker with other asylum seekers.

"When I got here I cried for maybe like two weeks. They don't know me, I'm a complete stranger to them, they're a complete stranger to me. They gave me a house," he said. "I think it's just beautiful. It warms your heart. Your own family pushed you out but them strangers take you in, treating you so nice, making you feel so special, making you feel at home. It saddens you on one end but then it uplifts you on the other end."

Michael, who also lives in a three-decker with fellow asylum seekers, has been helped by the task force since August 2018. He applied for asylum earlier this year and is also waiting for his work permit and social security.

"I lost family. I lost friends. Being with the task force has got me friends. It has got me family. I have hope," Michael said. "They have done so much for me honestly. I don't know where I would be right now."

At any time, the LGBT Asylum Task Force represents 24 to 28 asylum seekers, Green said, which costs $32,000 per month. The task force owns leases to several apartments in the city.

Funding for the task force comes in three parts: a grant, fundraising from an annual gala, and donations from individuals. The grant pays for Green's position as the only compensated person on staff. All other help by the task force is volunteer-based.

"We're in it for the long haul," Green said. "Until you can legally work to support yourself, we'll be there supporting you."

The task force works with organizations across the city, including the Family Health Center of Worcester, Inc.

The health center connects asylum seekers with primary care doctors and resources to help them through the process, focusing on a trauma-informed approach, according to Jeanne Mailloux, the manager of integrated behavioral health at the Family Health Center.

"It really is life and death. A lot of these individuals were facing death in the countries they were coming from," Mailloux said. "If they had nowhere to turn or nowhere to go, that could have been the likely outcome."

Over the summer, Newman said he prepared his asylum case, filling out an application and writing a declaration. He is just now meeting with an attorney to prepare everything to file for asylum.

"I'm hoping for the best here. I want to get back into education. I really love kids," Newman said. "Nation-building is my passion. That's why I really became a teacher. I wanted to help build my nation and what better way to do it than through the classroom."

For Newman, like many asylum seekers, going from working every day to not being able to work in the United States has been challenging. Newman has been trying to fill his time, working on his case, taking classes at Quinsigamond Community College and teaching Sunday school at Hadwen Park Church.

"It's hard to remember your story, your country, your own family telling you, 'we don't want you around,'" Newman said. "The other thing that affects me the most is I'm accustomed to working . . . you think about how successful you were and now you're back at zero."

In Worcester, one thing that comforts Newman is the presence of Sharon McQueen, the Worcester Police Department's LGBTQ Liaison Officer, at monthly meetings. It has proven to him that he doesn't need to fear police here, he said.

Green, a 29-year-old graduate of Worcester Polytechnic Institute, first got involved with the task force as an asylum seeker himself before taking over the role of director. He's still waiting to be granted asylum.

After graduating from WPI in 2012, Green went back to Jamaica.

"Imagine being here for four years and being accustomed to freedom, this is after spending 17, 18 years in your home country and being suppressed and oppressed," he said. "Coming here and seeing ok, I can actually for the first time have a relationship that is public. I can go to the movies and not have to worry about who's watching. I can go out for drinks even with just a male colleague and not have to invite a couple of female colleagues as well so that folks don't think we're on a date."

It became clear that he had to come back to the United States.

"For people like me, its literal hell on earth having to live in a completely closed off, underground segment of society. Basically, if found out, being treated as a second-class citizen in your own country," Green said.

Every day includes prayer and hope for asylum seekers.

Michael tells himself that things will be OK eventually.

"They say time heals wounds," he said. "Maybe it will heal mine."

A view from the outside: 'Boom Bye Bye' to homophobic Jamaica

Cheers to 58 Years! Red Stripe celebrates with a gift to consumers