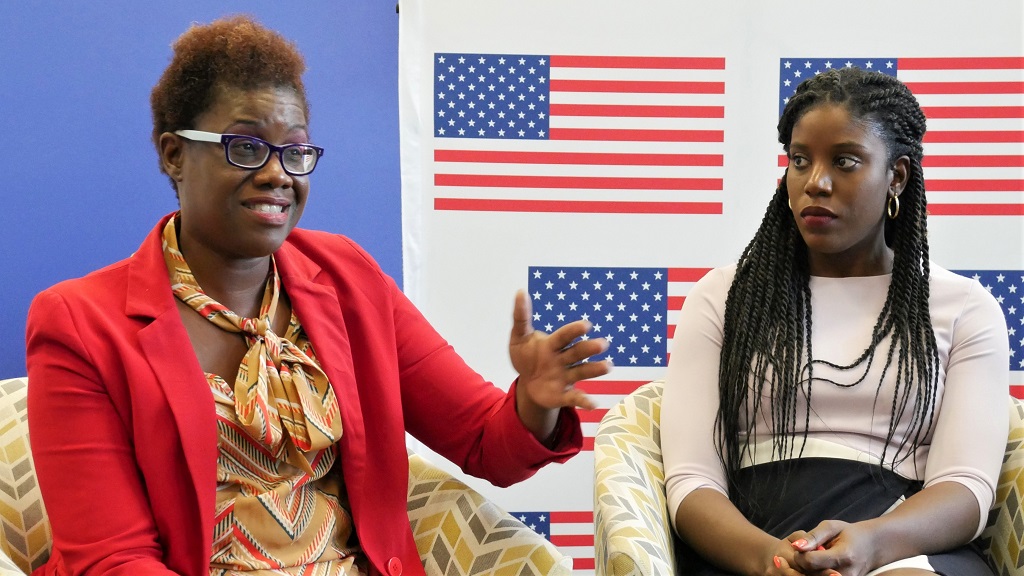 Susan Hamilton (left), Executive Director of the Abilities Foundation of Jamaica, makes a point during a roundtable discussion at the US Embassy in Kingston. Looking on is Lianne McNaughton, Founder and Managing Director, Youth Can Do I.T.

In Jamaica, women with disabilities are often overlooked as not being able to contribute productively to society.

However, the Abilities Foundation of Jamaica is one group that is seeking to break down that stereotype by providing opportunities for young women with disabilities to be trained and productively employed in the fields of agriculture and furniture making.

A project implemented by the Abilities Foundation called “We are different; empowering women with disabilities”, was made possible by a US$20,000 grant from the US Embassy in Kingston in 2019, as part of its Women’s History Month efforts to support organisations empowering women.

Under the project, some 20 women with disabilities living in and around Kingston and St Andrew were targeted for training over 20 weeks.

While achieving success in its objectives, the project revealed several complex issues affecting the women, such as depression, substance abuse, and challenging social and economic circumstances.

“So far, the project has many successes, but we soon realised we were looking at girls who were broken, women who could not leave their homes because they were in a wheelchair and had no transportation;  women who had suffered abuse. They just started to unload (their problems) on us,” disclosed Susan Hamilton, Executive Director of the Abilities Foundation of Jamaica.

The vision of the project was to equip the women in male-dominated fields, while changing their narrative of what women with disabilities could aspire to and achieve.

This was never going to be easy for the group which included women aged 17 to 38 who had a range of disabilities including women who were blind, deaf, confined to wheelchairs, or had mild intellectual disabilities.

“Out of the 20 women, some got pregnant, some didn’t see the value of (the training) and how it would apply to them, and some had to leave early (to cook dinner for their partner or for other reasons)," Hamilton noted.

“We had inherent biases too in how we viewed women with disabilities. We began to see the gaps and it opened other training opportunities for them."

Hamilton is however very thankful to the staff and the consultants who delivered on the project; such as the National Commercial Bank which opened bank accounts for the women without deposits, and former Miss Jamaica World, Joan McDonald, who taught them how to walk, sit, apply makeup and dress for an interview.

The women learned all aspects of agriculture from preparing the land to getting the products out to sale; and several aspects of furniture making, in particular buffing and finishing the pieces.

As a government entity itself, the Abilities Foundation was grateful that it could make a difference to the lives of young women.

“The government recognises it can’t do everything,” Hamilton stated. “But you have to strategise and  work yourself into the system of government to know the opportunities and to encourage the system to change," she said.

Hamilton was among several US Women’s History Month grantees who told their stories at the US Embassy in Kingston earlier this month.

Eve for Life - in the difficult fight against gender-based violence

Young women making strides in IT through mentoring programme

Broaching conversations on gender violence 'From the Barber Chair'