Desperate hunt for food by Peru's poor amid virus quarantine 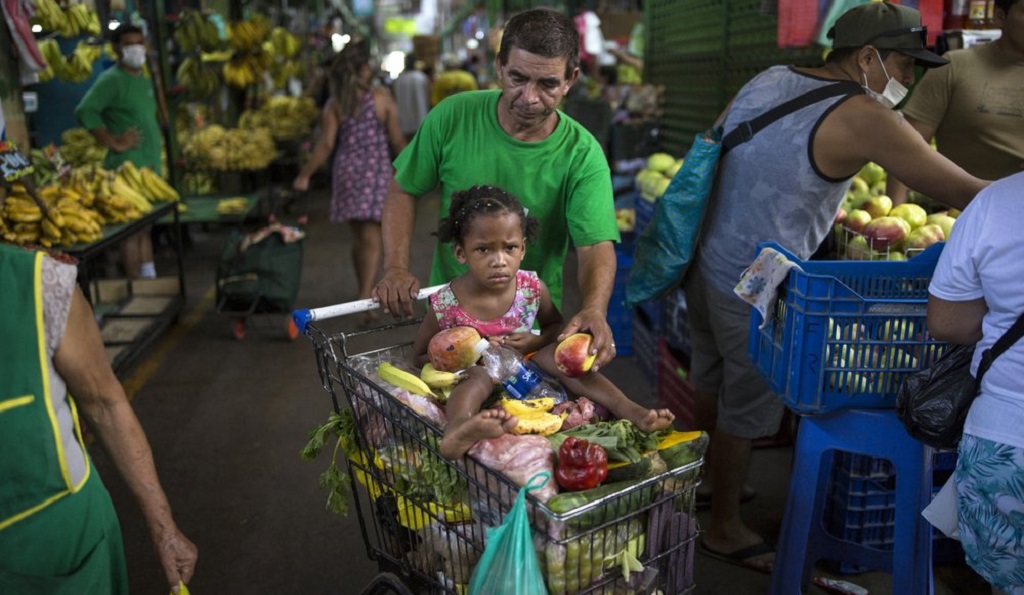 In this March 18, 2020 photo, Cesar Alegre, accompanied by his 4-year-old daughter Lia, places a damaged apple in his shopping cart filled with discarded produce given to him by vendors at a popular market in Lima, Peru. A month-long quarantine to curb the spread of the new coronavirus has forced millions of Peruvians to stay home and closed restaurants and food kitchens making it harder to feed his children. (AP Photo/Rodrigo Abd)

Pushing a shopping cart with two children, César Alegre emerges from the large, deteriorated house near Peru's presidential palace that is shared by 45 families to search for food. Sometimes he begs in markets. Sometimes he sells candies.

It is a task that was hard at the best of times, but with a month-long quarantine that has forced 32 million Peruvians to stay home and closed restaurants and food kitchens, it has become much harder. 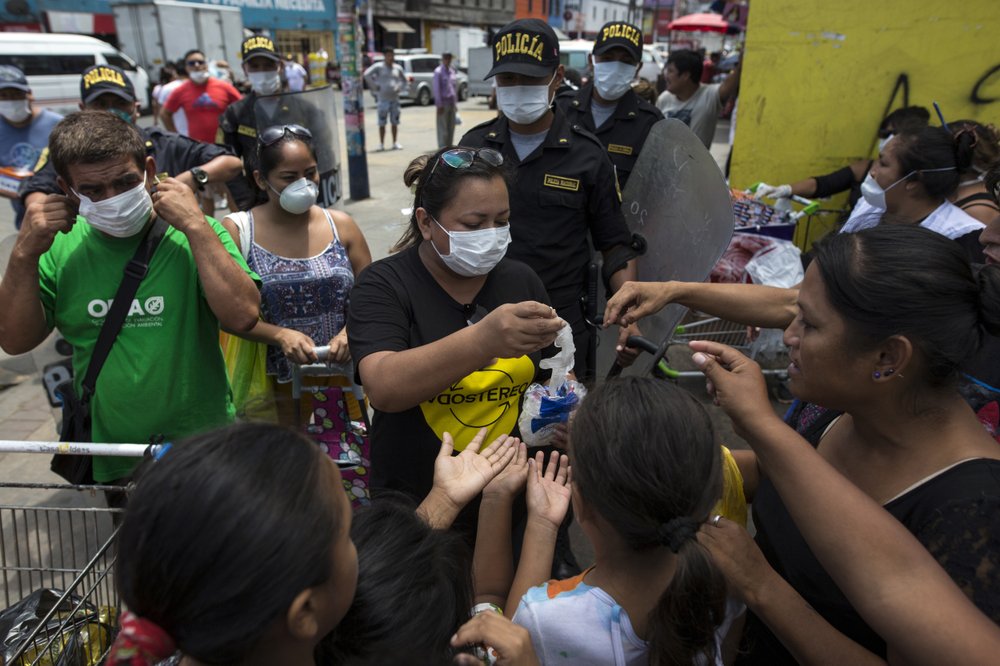 (Photo: In this March 19, 2020 photo, Cesar Alegre, far left, and fellow residents who share a sprawling rundown house, receive free protective gear to help curb the spread of the new coronavirus, outside a popular food market in Lima, Peru. Alegre and his children, accompanied by a handful of residents, start out by walking about 2 miles (3 kilometers) to the market where merchants give them potatoes, meat bones and overripe fruit that nobody wants to buy. (AP Photo/Rodrigo Abd)

"We eat once or twice a day," said the 52-year-old, who says he has spent time in six different prisons for theft. Many among the 100 or so residents of the three-story house are ex-convicts who can't find work. The old building is opposite Lima's San Lazaro church, which was founded in 1650 as a hospital for refugees from a leprosy outbreak.

Alegre and his children, accompanied by a handful of neighbors, normally start out by walking about 2 miles (3 kilometres) to a market where they ask for food. The merchants give them potatoes, meat bones and overripe fruit that nobody wants to buy.

But these days the merchants are refusing to give them as much food, if any at all, because their sales have fallen amid the pandemic and strict measures that have kept people at home and shuttered the restaurants that would buy their goods.

"They're vagrants," said a meat vendor of the inhabitants of Alegre's building, which has earned the nickname "Luriganchito," or "Little Lurigancho," after Peru's most-populous prison, for the number or ex-convicts who reside there. The vendor said two weeks ago a young man from the building stole a bag of fish. 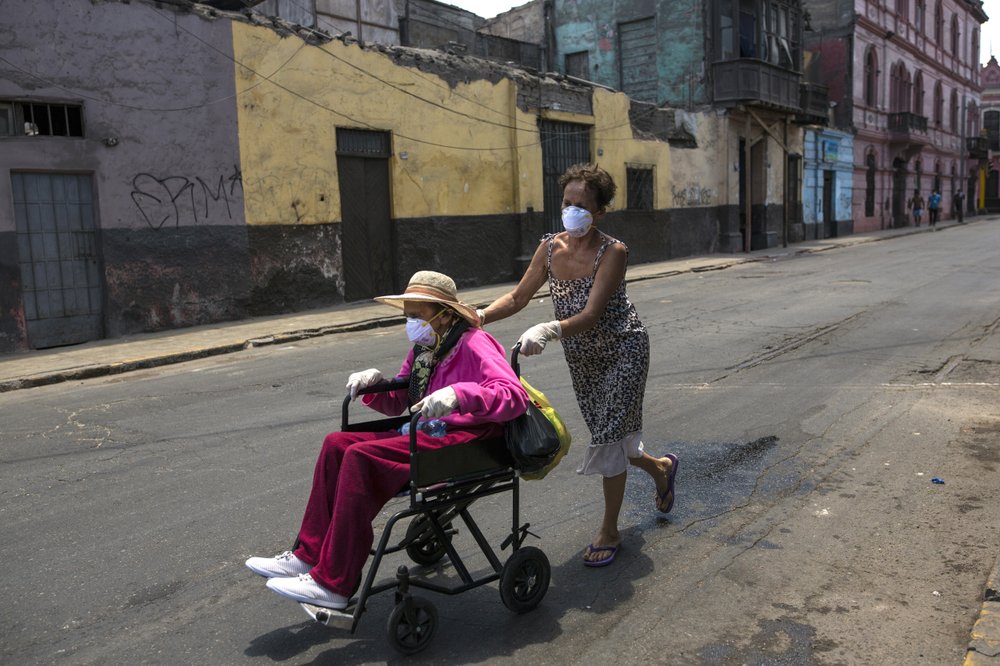 (Photo: In this March 18, 2020 photo, Flor Vaso pushes her 84-year-old mother Carmen Reyes in a wheelchair to their home, in Lima, Peru. Vaso and her mother reside with 44 other families in a large, deteriorated house near the presidential palace that has earned it the nickname “Luriganchito,” or “Little Lurigancho,” after San Pedro de Lurigancho, the country’s most populous prison. (AP Photo/Rodrigo Abd)

Besides begging in markets, Alegre also sells candy on buses. Nowadays, passengers wear face masks and don't like strangers coming near them.

"The virus has highlighted the selfishness that man carries inside," he said.

The pandemic has spotlighted the wide gap between rich and poor in Peru and elsewhere in Latin America, and economists say a looming recession worse than any since World War II could push the continent's long-suffering poor into even more dire circumstances.

"The economic impact of what is happening is unprecedented," said Peru's economy minister, María Alva.

For most people, the new coronavirus causes mild or moderate symptoms, such as fever and cough that clear up in two to three weeks. For some, especially older adults and people with existing health problems, it can cause more severe illness, including pneumonia and death.

As of Monday, Peru had 2,561 confirmed coronavirus cases, with 92 deaths, The government has steadily tightened bans and lock-downs to slow the spread of the virus. This past week it ordered that only men can leave the house on Mondays, Wednesdays and Fridays, while only women can go out on Tuesdays, Thursdays and Saturdays. The trips can only be to the market, pharmacy or bank.

To try to address the humanitarian disaster, Peru has begun distributing about $400 million to feed 12 million poor people for one month. 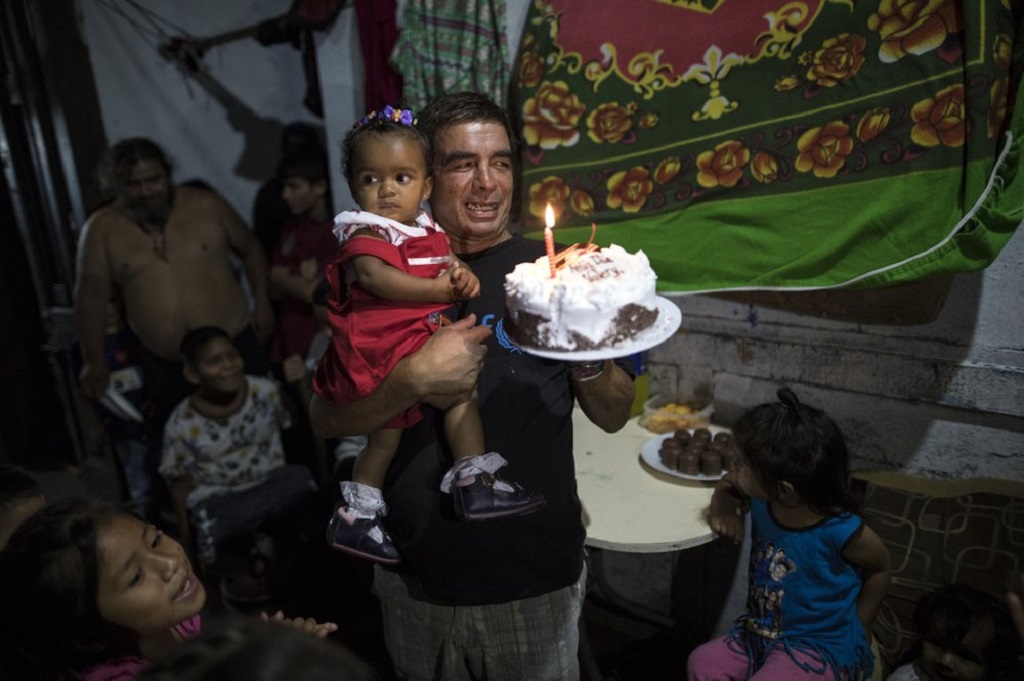 (Photo: In this March 18, 2020 photo, Cesar Alegre carries his daughter Valerie while holding her store bought cake, as he and fellow residents prepare to mark her first birthday in the deteriorating building where they live, nicknamed “Luriganchito” after the country’s most populous prison, in Lima, Peru. Since the nationwide lockdown decreed by the government to curb the spread of the new coronavirus, Alegre and his children walk to a market every other day in hopes that merchants give them the overripe or expired food that nobody wants to buy. (AP Photo/Rodrigo Abd)

But the money doesn't seem to be reaching most of the families in Alegre's sprawling shared house. The building in Lima's Rimac district is a relic from the area's historic era and still has balconies from its better days. But inside its now-cracked walls is a warren of narrow, dark passageways that smell of damp clothing and marijuana. Children run through them barefoot as cockroaches scatter to avoid being crushed.

Its residents have stories of hard luck and tough living.

Santos Escobar, a 68-year-old former mug seller, ended up living in "Luriganchito" after his house burned down twice. In the first fire, two of his six daughters died. In the second, both his legs were burned.

Nélida Rojas, 59, had a stroke two years ago that partially paralyzed her. She now uses crutches and begs for alms.

Nilú Asca is a 24-year-old single mother with two daughters. The youngest is 2 and has some type of hip dislocation or problem that forces her to wear a plaster cast.

Eating with his children in their small room, Alegre watches the news on an old television set. He believes what is preventing looting is the deployment of 140,000 uniformed officers to guard food markets and banks.

But his long-term outlook is not optimistic.

"There are a lot of desperate people. They could rise up if they don't get help," said Alegre.

WATCH: A timeline of the coronavirus outbreak

Death and COVID-19: How to find closure when a loved one dies alone