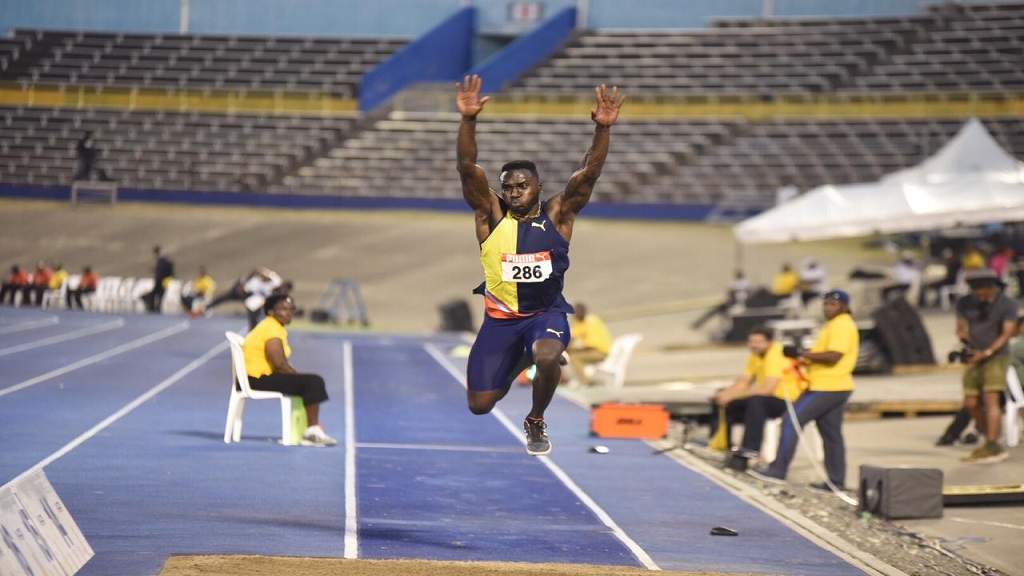 The winning jump, which came in the third round, surpassed the World Championships qualifying standard of 16.95m but was deemed illegal as the wind (4.6m per second) was well over the allowable limit at 2.7m per second.

In order to be entered for automatic selection for the World Championships, athletes need to achieve the qualifying standard mark and place in the top three in their event.

Pullen, who in 2016 became the first Jamaican man since Henry Jackson in 1972 to qualify for the Olympic Games in the triple jump event, was winning the national title for the third time. The 24-year-old Pullen had won back-to-back national titles in 2016 and 2017.

Jordan Scott of the University of Virginia, the 2018 national champion, finished second with a wind-aided 16.77m (4.6mps), while University of Texas student Obrien Waysome finished third with 16.35 (0.8mps).

Elvis Grahan of GC Foster College is the national champion in the javelin with a throw of 71.65m. MVP Track Club pair of Orlando Thomas (69.21m) and Orrin Powell (64.97) finished second and third.

Meanwhile, Rushell Clayton of Swept Track Club and Janieve Russell of MVP Track Club were among the fastest qualifiers from the women’s 400m hurdles heats.

Clayton eased into Friday night’s final after posting a time of 55.36 seconds to win heat 1, the fastest time of the two heats,

Shiann Salmon of G.C. Foster College ran 55.54 for second place behind Clayton to qualify for the final as well.

Russell, the Commonwealth Games silver medallist,  stopped the clock at a comfortable 55.74 second to win the second heat ahead of the fast-finishing Ronda Whyte of Sprintec, who ran 55.79.

Kaliese Carter of Sprintec was third in 56.52, while Ranae McKenzie, who competes for Kansas State, finished fourth in 57.94 and progressed to the final as well.

On the men’s side, Javarn Gallimore of Swept Track Club posted the fastest time from the heats after he won the second section in 49.48.

Running out of lane six, Gallimore got the better of a good lineup to set a big personal best on his way to the final.

Andre Clarke of Chase Athletics was second in the heat in 49.86, with third going to Shawn Rowe in 50.03. Both hurdlers also progressed to the last eight.

Kemar Mowatt qualified second fastest from the heats after he ran 49.69 to win the first race from lane eight.

Following Mowatt home was Romel Lewis, who crossed the line in 49.81, while Sheldon Williams booked his place in the final with a time of 49.86 for third place.

Jaheel Hyde of the MVP Track Club captured the third and final heat in 50.66, beating Kemario Eldemire of G.C. Foster (50.90).

The senior athletes are hunting for places on Jamaica's team to the IAAF World Championships in Athletics in Doha, Qatar from September 28 to October 6 and the Pan Am Games from August 6-11 in Peru.