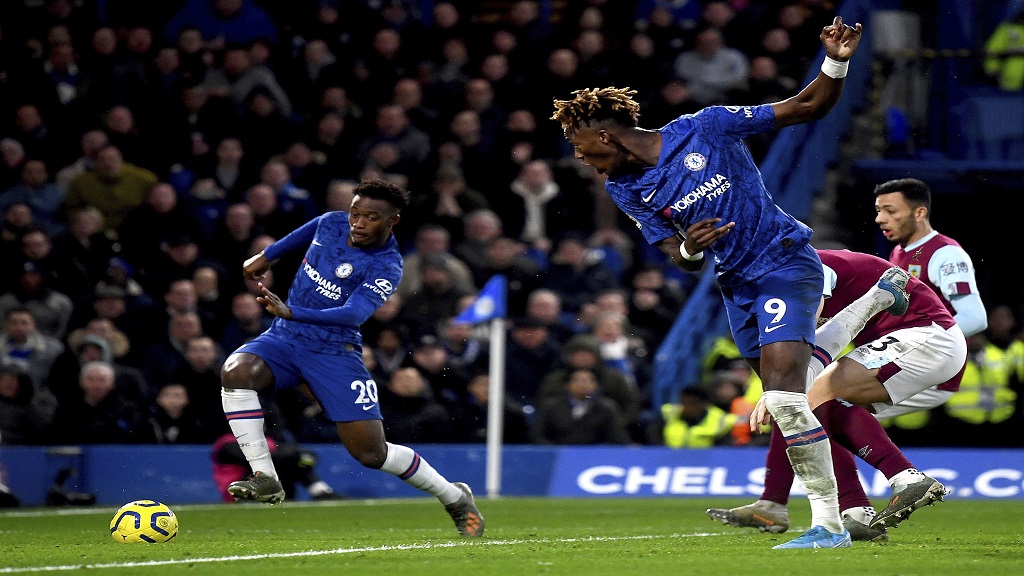 Chelsea's Callum Hudson-Odoi, left, on his way to score his team's third goal, during the English Premier League football match against Burnley at Stamford Bridge, in London, Saturday, Jan. 11, 2020. (Victoria Jones/PA via AP).

Callum Hudson-Odoi scored his first Premier League goal as Chelsea shrugged off their home struggles with a 3-0 win over Burnley at Stamford Bridge.

Frank Lampard had seen his team lose three of their past four top-flight matches on their own patch and they had an early scare when a debatable offside call denied Jeff Hendrick the opener.

However, Jorginho's 27th-minute penalty and Tammy Abraham's 15th of the season in all competitions settled nerves.

Hudson-Odoi then got in on the act and only some later wastefulness from Abraham averted a heavier defeat for Burnley, who are four points above the relegation zone in 15th having played a game more than the four sides immediately below them.

Burnley thought they were ahead in the 18th minute, but Ben Mee was flagged offside when he nodded Dwight McNeil's free-kick back across goal for Hendrick to finish.

A VAR review allowed a marginal call from the referee's assistant to stand and the visitors again had no help from the video official when Chelsea went ahead.

Although Matthew Lowton pulled his boot out of a challenge on Willian, who appeared to be anticipating contact, he still clattered into the Brazil winger and Jorginho coolly dispatched from 12 yards.

McNeil's set pieces were causing Chelsea problems, with Kepa Arrizabalaga turning a low attempt to his near post behind before Mee's header from the resulting corner was cleared off the line by Ross Barkley.

Mee's positioning might have inconvenienced Nick Pope when the Burnley goalkeeper waved Abraham's header into his net.

Pope partially atoned for that bizarre lapse with a sharp stop from Reece James, who crossed impeccably for Abraham's goal.

Lax Burnley defending allowed Hudson-Odoi to slide in Cesar Azpilicueta's cross four minutes after the restart, with a VAR check concluding Abraham did not get a flick on that would have seen the goal ruled out for offside.

Abraham misjudged to head over at the near post, having been denied by a reflex stop from Pope, who kept out a Willian piledriver and first-time Mason Mount strike inside the final 15 minutes.

What does it mean? Chelsea keep their grip on fourth

On a day when Manchester United were similarly convincing winners over Norwich City, Lampard's men were able to keep the gap between themselves and the Red Devils in fifth at five points. Chelsea are now unbeaten in three league matches after an uneven run and will hope to relocate their early season consistency.

Dwight a delight for cumbersome Clarets

No doubt Sean Dyche's complaints about VAR, diving and other injustices, imagined or otherwise, will dominate the post-match conversation as far as Burnley are concerned. That is a tedious shame because in England Under-21 winger McNeil they have a wonderful talent on their hands. His left-footed deliveries were devilish throughout, while his probing and powerful running kept Chelsea honest long after the result was a formality.

Burnley's gameplan on these occasions is built upon organisation, discipline and not having too much of the ball. While that leaves them feeling the effects of tight calls more than most, it also means they cannot afford errors of the sort Lowton and Pope coughed up to skew what had been an even contest.

Chelsea travel to Newcastle United next Saturday, with Burnley hosting high-flying Leicester City a day later as they seek to avoid a fifth consecutive top-flight loss.