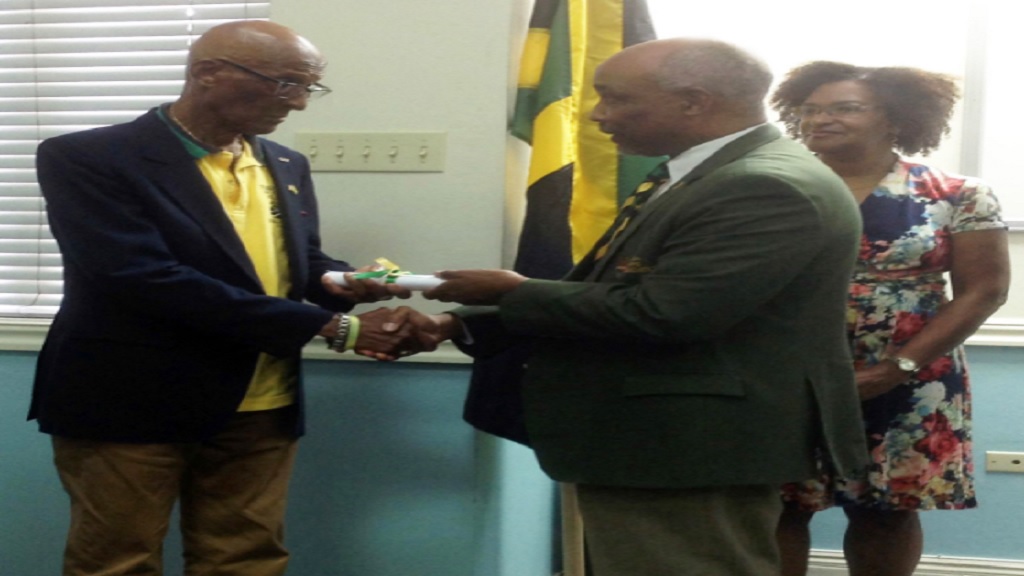 President of the Jamaica Olympic Association (JOA), Christopher Samuda (right) presents an Olympic Pin to Olympian Byron LaBeach at a ceremony on Sunday, June 16 at the offices of the JOA.

Byron LaBeach, the distinguished Olympian of the 1952 Helsinki Olympic Games, was not one of the golden quartet athletes in the 4x400m final, but history records that he stood ably with Arthur Wint, Herb McKenley, George Rhoden and Leslie Lanig in giving Jamaica the often celebrated victory.

LaBeach was the reserve, then referred to in 1952 as the alternative athlete, but on Sunday, June 16 at Olympic Manor, he was exclusively in the spotlight as he received the Olympic Pin from President of the Jamaica Olympic Association (JOA), Christopher Samuda, in a ceremony witnessed by family members and Olympians.

The Jamaican achiever was grateful for the honour and recounted the arduous and self-sacrificial journey in achieving personal goals while bringing glory to Jamaica.

LaBeach competed in the 100m in Helsinki but never made it to the final. However, he was a finalist two years later in Mexico at the Central American and Caribbean Games in both the 100m and 200m events, placing fourth and fifth respectively.

His golden moment came when he teamed with Laing, Rhoden and Keith Gardener in taking the 4x100m event.

Samuda in lauding the feats of LaBeach said that what made his achievements more admirable was the character and humanity which he then exemplified and continues to embody.

The Jamaican Olympian now lives in the United States and is currently engaged in writing and hopes to publish a book which will provide a wealth of information, known and unknown, that will serve as a guide to aspiring athletes and standard bearers in sport.