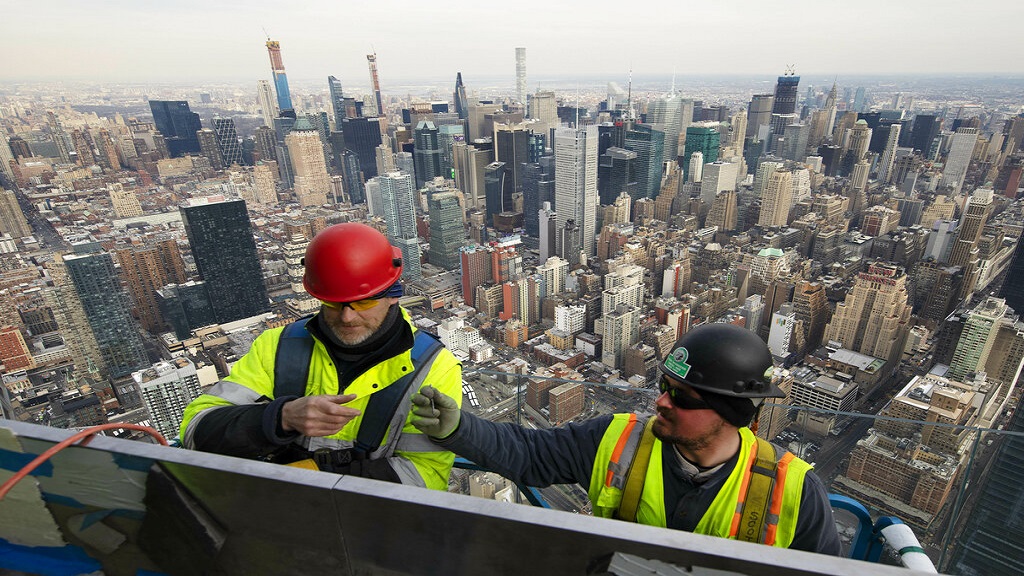 In this March 8, 2019, file photo, work continues on an outdoor observation deck on the 30 Hudson Yards office building in New York. Business economists expect U.S. economic growth to slow this year and next, but they say the economy will avoid recession. (AP Photo/Mark Lennihan, File).

The nation’s business economists expect US economic growth to decelerate this year and next but for the economy to avoid stumbling into recession, extending a record-breaking expansion already in its 11th year.

The latest survey by 53 forecasters with the National Association for Business Economics shows that they expect economic growth to slow from 2.9 per cent last year to 2.3 per cent in 2019 and 1.8 per cent in 2020.

The forecasts are unchanged from the association’s previous survey in October.

The economists put the odds of a recession starting at five per cent this year, 21 per cent in the first half of 2020 and 43 per cent by the end of next year.

The US economy is likely to remain resilient this year and next, they say, despite risks arising from President Donald Trump’s trade war with China and skirmishes with other US trading partners: Half the respondents call trade tensions the No. 1 downside economic risk through the end of next year.

The Trump administration has slapped tariffs on $360 billion in Chinese imports and is scheduled to hit another $160 billion in December China has retaliated by targeting $120 billion worth of American products.

The world’s two biggest economies are locked in a dispute over US allegations that China deploys predatory tactics, including the outright theft of trade secrets, in an aggressive push to challenge US technological dominance.

The Federal Reserve has lowered the short-term interest rate it controls three times this year. The cuts are meant in part to offset economic damage from Trump’s trade wars, which have raised uncertainty for businesses and contributed to a drop in business investment in the April-June and July-September quarters.

The vast majority of business economists — 94 per cent — do not expect the Fed to cut interest rates again this year. But they are divided over what the central bank will do next year.

The economists expect American consumers to continue driving the economy. Consumer spending, which accounted for almost all US economic growth from July through September, is expected to grow a healthy 2.6 per cent this year and 2.4 per cent in 2020.

Is a recession near? Stock market woes raise a nagging fear