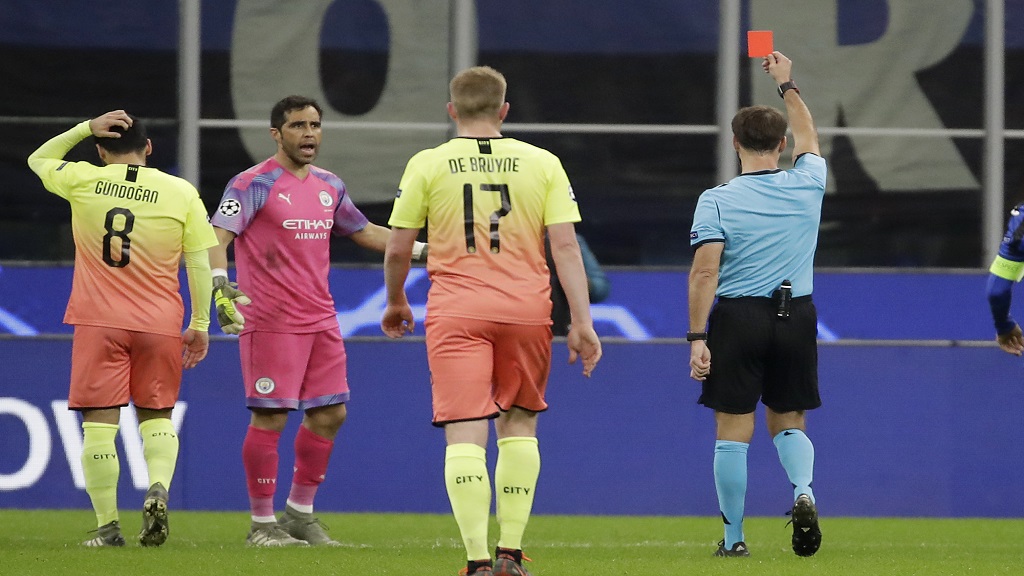 Atalanta picked up their first Champions League point as they held 10-man Manchester City to a 1-1 draw on Wednesday — but couldn't capitalize on the visitors having to finish the match with defender Kyle Walker in goal.

The Italian side looked headed for a fourth straight loss in Group C when Raheem Sterling — who scored a hat trick in Man City's 5-1 win in the reverse fixture — put the Premier League champion in front in the seventh minute.

However, Gabriel Jesus dragged a penalty wide three minutes before halftime and Mario Pasalic leveled for Atalanta four minutes into the second half.

Atalanta dominated the second period and their winning chances increased when City's substitute goalkeeper Claudio Bravo was sent off for a last-man foul on Josip Ilicic.

Having already brought on Bravo as a halftime replacement for Ederson, Pep Guardiola had to put Walker in goal. The defender saved the resulting free-kick — although not without spilling it — and City managed to see out the final minutes.

Atalanta stayed bottom, four points below Dinamo Zagreb and Shakhtar with matches against both still to play.

City would have secured a spot in the knockout round with a win and took an early lead with a delightful move. Bernardo Silva played in a ball from the left and Jesus backheeled it into the path of Sterling, who slotted into the bottom corner.

Sterling had numerous chances to add to his tally but he just failed to connect with a cross from Riyad Mahrez and then had a shot blocked by Hateboer.

City were awarded a penalty shortly before halftime but video review showed that Rafael Toloi's shirt tug on Sterling was outside the box and a free-kick was given instead.

However, Sterling's free-kick then hit Ilicic's hand in the wall and, after reviewing it on the pitch-side monitor, referee Aleksei Kulbakov awarded a penalty.

But Jesus hit a tame effort wide of the right post. City then suffered a blow ahead of Sunday's key Premier League game with Liverpool as goalkeeper Ederson had to go off at halftime.

Bravo's first action was to pick the ball out of the back of the net after Pasalic was left unmarked to head in a cross from Alejandro "Papu" Gomez.

That appeared to boost Atalanta's confidence and it went close to taking the lead on several occasions, notably when Berat Djimsiti headed a corner just wide of the left upright.

City had struggled with its offside trap in the second half and it almost cost it dearly as, with nine minutes remaining, Ilicic burst through clear on goal and was brought down by Bravo, who had come rushing out of the area.

There was a lengthy delay before VAR confirmed the decision, forcing Guardiola to bring on Walker.

Gov’t to deliver 100 houses for the indigent