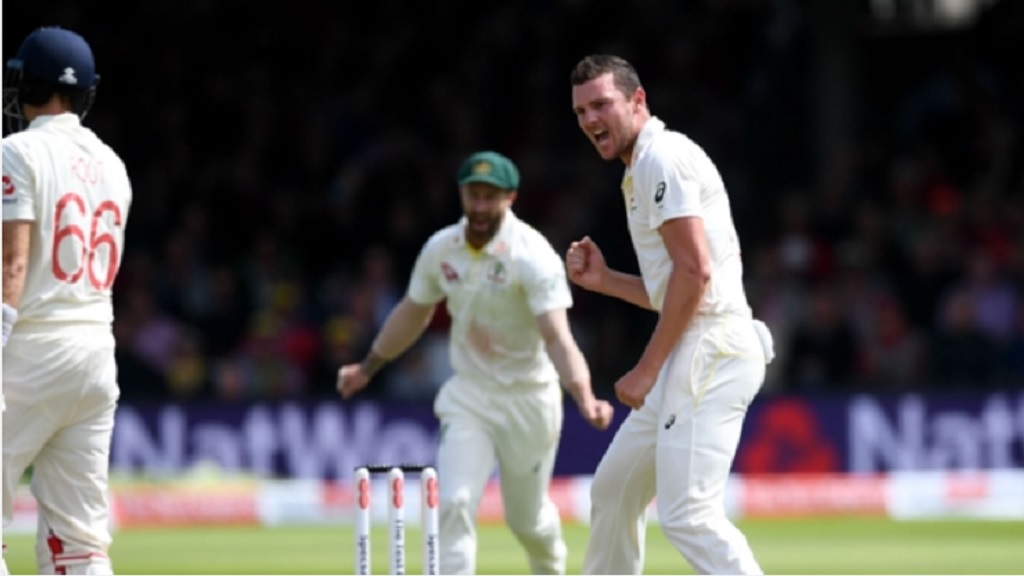 Australia consolidated their commanding early position in the Ashes by dismissing England for 258 on day two of the second Test at Lord's.

Following a first-day washout, visiting captain Tim Paine won the toss and inserted England, with the frailties exposed in their 251-run defeat at Edgbaston again evident in the face of some supremely disciplined Australian bowling.

The tourists' attack was spearheaded by Josh Hazlewood (3-58), who missed out in Birmingham but set the tone with a high-class opening burst that accounted for Jason Roy and England captain Joe Root.

Pat Cummins (3-61) executed a short-pitched ploy impressively on a surface that showed a few signs of being two-paced, while England's first-Test tormentor Nathan Lyon (3-68) found turn to claim three scalps, including dismissing Ben Stokes for 13.

Half-centuries from Rory Burns (53) and Jonny Bairstow (52) gave England something vaguely useful to bowl at.

Stuart Broad dismissed David Warner for the third time in the series – a personal battle unquestionably going in England's favour. Nevertheless, as Australia closed on 30-1, the overall tide still felt some way from turning.

Paine's decision at the toss raised some eyebrows but Hazlewood was straight into his work, persuading Roy to fend into the slips with no runs on the board.

Root threaded two immaculate cover drives to the fence but was trapped plumb in front – Burns telling his skipper there was no point wasting a review.

Joe Denly and Burns saw England through to lunch at 76-2 before the former became Hazlewood's third victim for 30, edging a teasing delivery through to wicketkeeper Paine.

As was the case while making his maiden Test century at Edgbaston, Burns rode his luck at times and was put down by Usman Khawaja, but a sensational grab at short leg by Cameron Bancroft off Cummins ensured he would not cash in to the same extent.

That brought Jos Buttler and Stokes together, yet England's heroes on this ground a month ago in the Cricket World Cup final were denied the chance to produce similar heroics by Peter Siddle (1-48) and Lyon respectively.

Not for the first time of late, Chris Woakes came to the crease and batted with far more assurance than the specialists above him – adding 72 with Bairstow for the seventh wicket.

But Cummins struck the Warwickshire all-rounder with a painful blow to the helmet and he gloved the same bowler behind to bring in the tail.

Broad and Jofra Archer made breezy cameos alongside Bairstow, who was caught by Khawaja in the deep off Lyon to be the last man out, and the England pacemen set about the Australia top order.

Archer got the Lord's crowd going on his much-anticipated debut in the longest format and Broad brought one back through the gate to have more fun at Warner's expense. However, Bancroft just about survived to finish the day on five not out alongside Khawaja, who was unbeaten on 18 at stumps.

SHORT STUFF DOES THE JOB FOR AUSSIES

Despite spending a day under the covers, the Lord's pitch was not as conducive to seam as Paine might have expected. Fortunately for the Australia skipper, he had a bowling department willing to carry out plans to the letter.

Following Hazlewood's supreme new-ball spell, Cummins played the enforcer. Denly, Burns and Woakes were all hit, although some of the tourists' batsmen might not have been keen to see Archer subjected to the short stuff. He may yet repay the favour in kind. WORLD CUP

HANGOVER OR OUT OF THEIR DEPTH?

Much has been made of England's World Cup heroes running on empty. Bairstow aside, they again failed to fire with the bat.

Yet the sight of Roy going hard at a ball he did not need to play at, as well as Buttler lacking footwork or form, suggested the problem for some might not be a lack of rest but the demands of the format itself.

MOMENT OF THE DAY

Bancroft might have ended Thursday being discomforted by Archer, but he will reflect fondly upon his wonderful one-handed reaction effort to remove Burns.

The England opener asked the umpires to review the catch and understandably so – it was scarcely believable.

- Only once in the last four Tests has a side gone on to claim victory after winning the toss and electing to bowl first at Lord's (D1 L2).
- Bairstow's 52 is the wicketkeeper-batsman's highest score in Test cricket in 2019
- Kent batsman Denly has scored more than 30 only once in nine Test innings
- Hazlewood removed Root for a fifth time in Tests - no bowler has dismissed him on more occasions in the longest format of the game
- Woakes is the only England batsman (three or more knocks) to average 40 or more in home Tests since the start of 2018 (42.2 – eight innings).