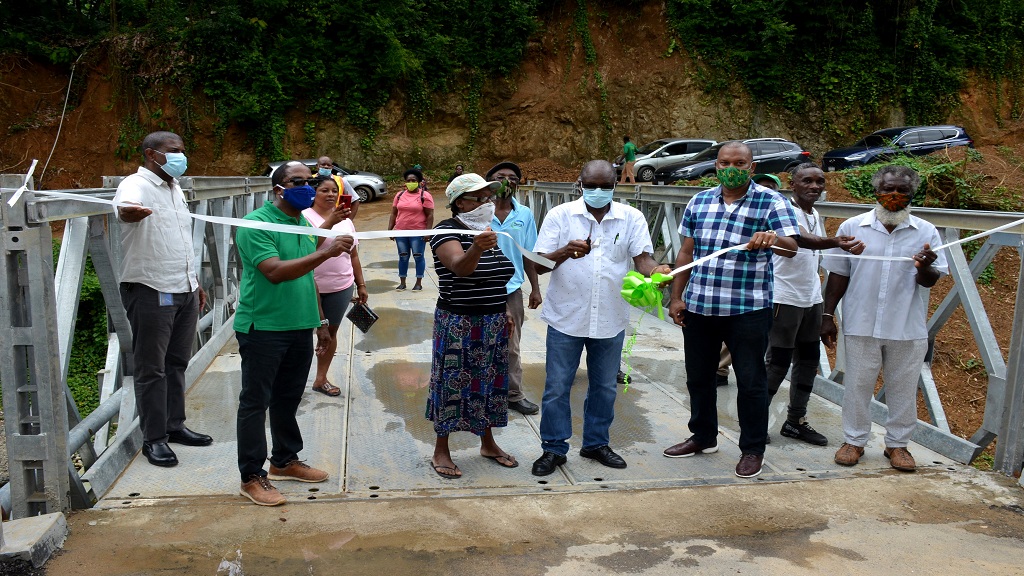 Minister without Portfolio in the Ministry of Economic Growth and Job Creation, Everald Warmington (centre), cuts the ribbon to officially open the new Barracks River bridge in St Mary on Wednesday, October 21.

The new Barracks River bridge in St Mary, constructed at a cost of more than $34 million, was officially opened on Wednesday by Minister without Portfolio in the Ministry of Economic Growth and Job Creation, Everald Warmington.

The new structure, which accommodates single-lane traffic, replaces a footbridge, which was destroyed during major flood rains. It will benefit hundreds of residents of surrounding communities.

Warmington, in his remarks at the opening, noted the Government’s commitment to transforming the country’s road infrastructure in order to improve the lives of Jamaicans.

He said that many roads and bridges across the island have been constructed and improved over the last several years.

State Minister for Industry, Investment and Commerce and Member of Parliament for South East St Mary, Dr Norman Dunn, commended the residents for their patience and understanding during the construction phase.

For his part, Mayor of Port Maria, Richard Creary, who is also Councillor for the Richmond Division, said he is pleased that the residents can now move about with ease.

“We are extremely happy for this bridge and based on the construction, we will not need another bridge in my lifetime,” he noted.

Works were implemented by the National Works Agency (NWA) under the Government of Jamaica's Recurrent Bridge Development Programme.

The new structure can accommodate small and medium-sized vehicles. The bridge installation works included construction of abutments and the paving of approach roads.

Flat Bridge impassable due to broken down trailer

Why the Spanish River Bridge attraction has been locked down

Grange urges Jamaicans not to overlook violence against women, girls