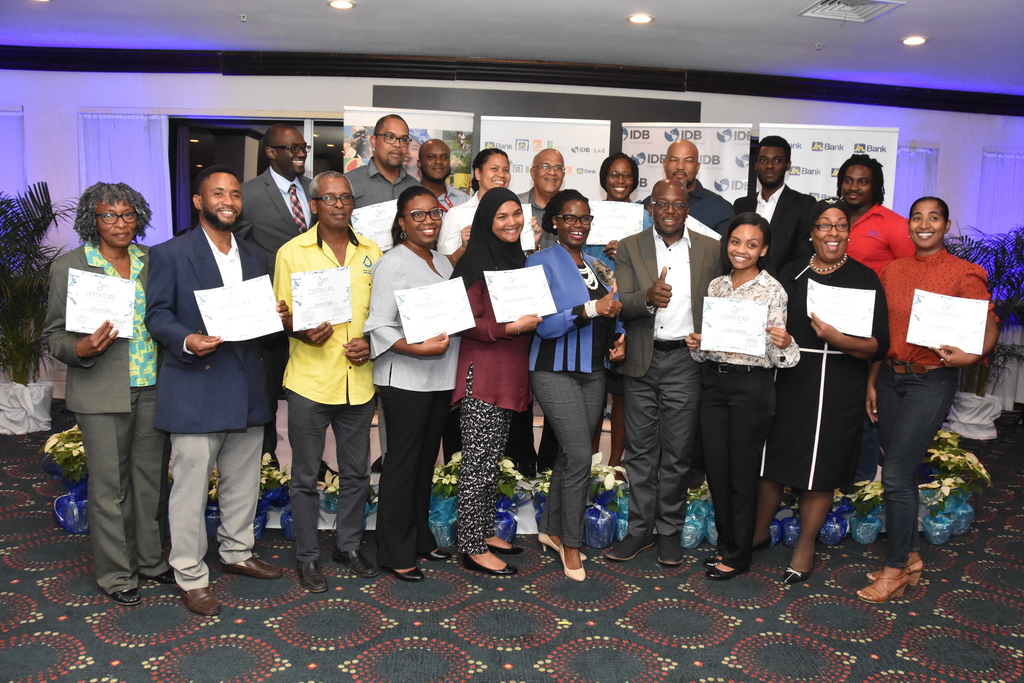 Graduates of the rain water harvesting and grey-water recycling get thumbs up from Senator Pearnel Charles (fourth right), Minister in the Ministry of Economic Growth and Job Creation and Onyka Barrett Scott (fifth from right), general manager of the JN Foundation.

The training programme was organised by the JN Foundation in collaboration with the Inter-American Development Bank (IDB), through the Water Project Jamaica.

Edward Shakes, one of the graduates said, “The course was engaging, yet flexible.  And, it was a remarkable, enlightening and vital learning experience.”

Shakes, an engineer, stated that the course facilitated him to design and scale a rainwater harvesting system, which he will construct for his parents who reside in Manchester, as he is now aware that the system is suited for the parish, based on its heavy rainfall.

For Coleen Williams, a householder, the course was timely, considering the effects of climate change; and she welcomed the applicable skills which participants learned during the 16 weeks programme.

“It is knowledge to share. I can now speak from the choir to the choir,” she said adding that she learned a lot during the 16 weeks.

Onyka Barrett Scott, general manager of the JN Foundation, stated that the graduates were ahead of the curve, given that they were the first batch to be trained in rainwater harvesting and grey-water recycling.

“Today, we are proud to be recognising graduates, who are armed with knowledge about rainwater harvesting and grey-water recycling; therefore, we are confident that they will effectively implement what they learned,” she maintained.

The JN Foundation’s general manager explained that the aim of the initiative is to build local capacity in the design and installation of a variety of water efficiency measures in the housing sector. Participants were exposed to the components of rainwater harvesting systems; water-saving devices, which can be implemented by homeowners, to save water; and factors which affect water quality; as well as, water standards. 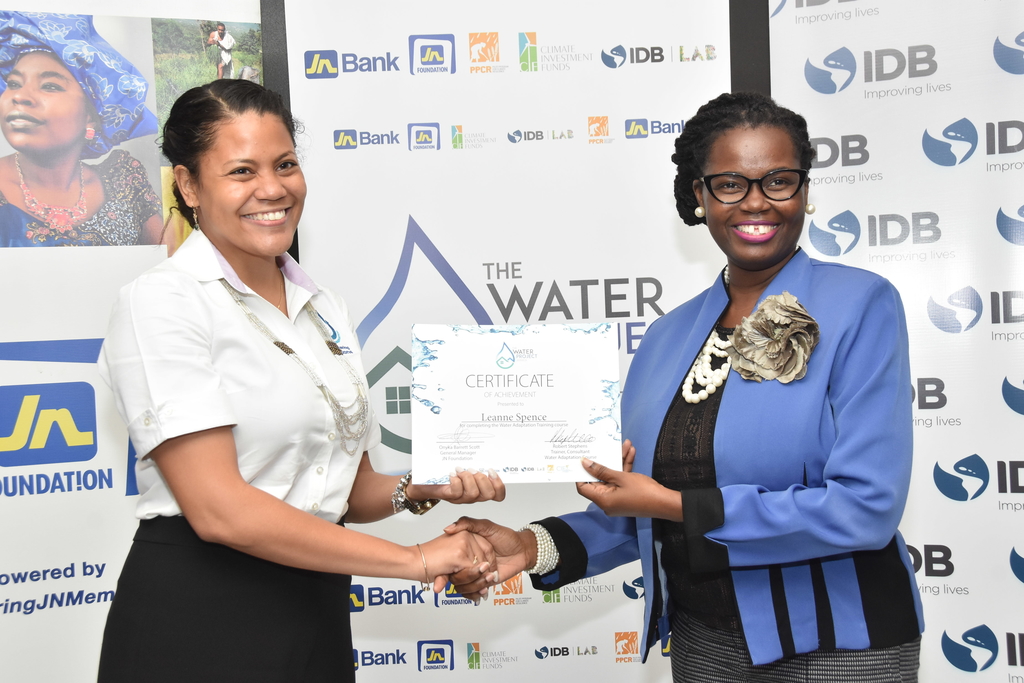 Onyka Barrett Scott (right), general manager of the JN Foundation presents Leanne Spence with her certificate of achievement at the graduation ceremony of the rain water harvesting and grey-water recycling training at the Jamaica Pegasus Hotel, recently.

Barrett Scott explained that, in the case of Jamaica, drought and the shifting patterns of rainfall are already creating serious challenges, which negatively impact the country’s water supply and distribution system.

She also noted that the problem of inconsistent water supply has a devastating effect on families, institutions and communities; and affect the business models of housing developers and construction companies, as was experienced this past summer.

In addition, she stated that limited financing and an uncertain business case for water adaptation are barriers to the uptake of water-efficient measures by the housing development sector.

“The Water Project Jamaica, therefore, aims to tackle these issues through the provision of an impactful, scalable model which will enhance Jamaica’s climate resilience” she posited.

Senator Pearnel Charles, Minister in the Ministry of Economic Growth and Job Creation, commended the JN Foundation and its partners for the training; and added that it was a demonstration that they are thinking outside of the box.

He encouraged the graduates to implement what they learned. “I’m challenging you, so that, it does not become another line on your resume,” he stated.

The minister underscored the importance for the country to have strong water policy guidelines; and gave his commitment to move the plan from draft stage to legislative format. “We have to press on the gas to have it completed,” he affirmed.

Harvesting rain could help Caribbean countries keep the water on after