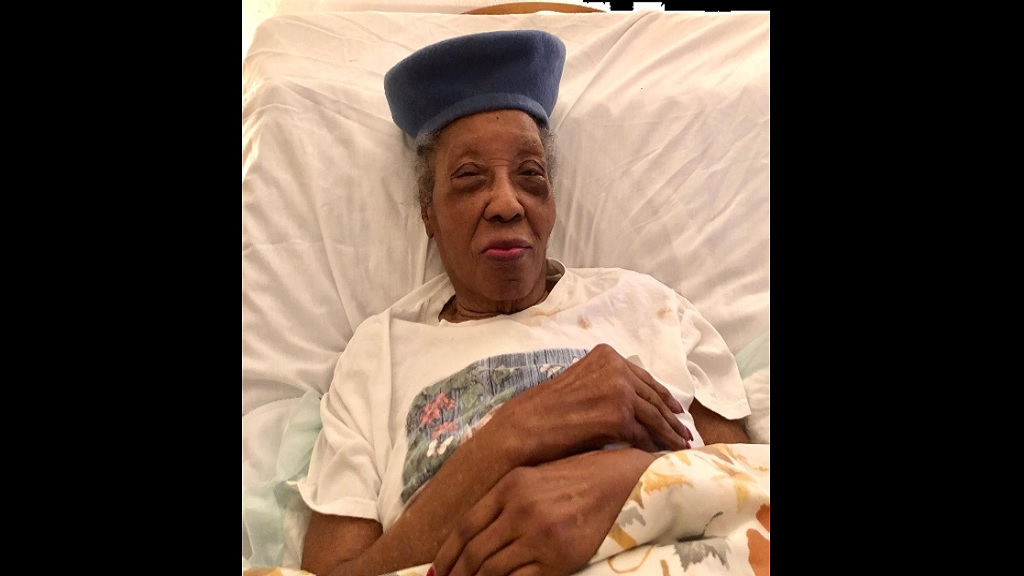 Soon to be 100-year-old Isis Clarke relaxing at home in Florida.

Long before Jamaica heard of Cynthia Thompson, Merlene Ottey, Veronica Campbell-Brown and Shelly-Ann Fraser-Pryce, all outstanding Olympians, there was Isis Clarke, the real pioneer of Jamaican female track and field.

Clarke, later named Clarke-Reid after her second marriage to Fred Reid, was one of the first women to represent Jamaica in track and field alongside her friend, Gertrude Messam.

According to newspaper articles from the late 1930s, Clarke-Reid regularly broke her own national records at the various track meets that were held then.

“She (Clarke-Reid) and Messam were the first women to represent Jamaica in track and field,” her brother, David Clarke, said from his Port St Lucie, Florida home.

“She never got any recognition for paving the way for other females in track and field,” David Clarke stated.

Clarke-Reid represented Jamaica at 100m, 200m and the 80m low hurdles. She first represented the country at the 1938 Central American and Caribbean Games when she was only 19-years-old and, when Jamaica competed under the British colonial flag. 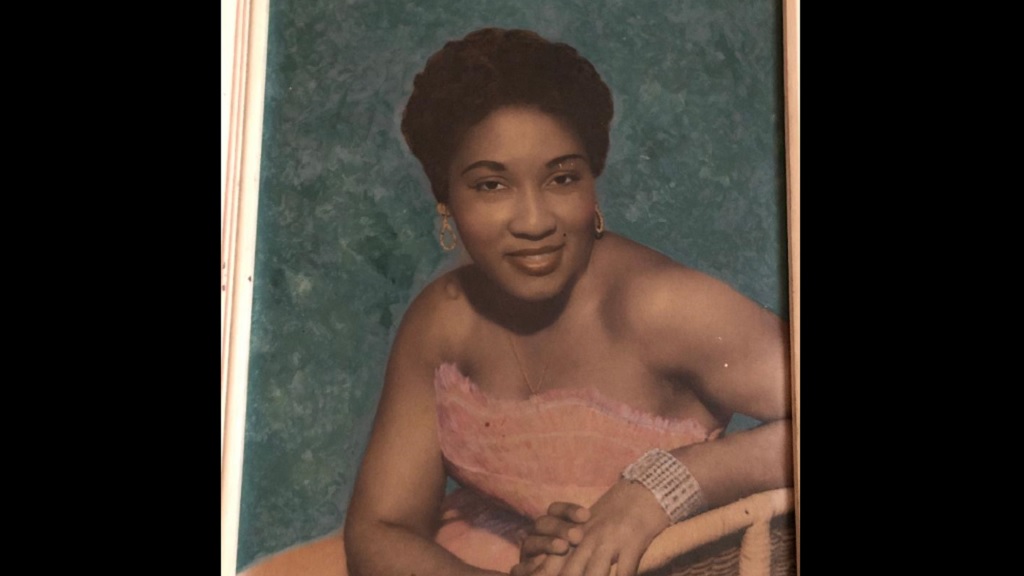 A much younger Isis Clarke.

Clarke-Reid, who lives in Port St Lucie, Florida with her younger brother and his wife, turns 100-years-old on Monday, November 18.

She is wheelchair-bound and suffers from dementia.

Her family is now concerned that with her advanced years and increasing frailty, she has never been recognised for representing her country with distinction and paving the way for other women to pursue careers in track and field.

Clarke-Reid was part of the quartet that included Messam, Rhona Saunders and Beryl Delgado, that won a bronze medal for Jamaica in the 4x100m relay at the 1938 Central American and Caribbean (CAC) Games in Panama City. The legendary Arthur Wint, who would go on to create Olympic history in London in 1948, was part of the Jamaican team that placed fifth among 10 countries, winning 22 medals at those games. 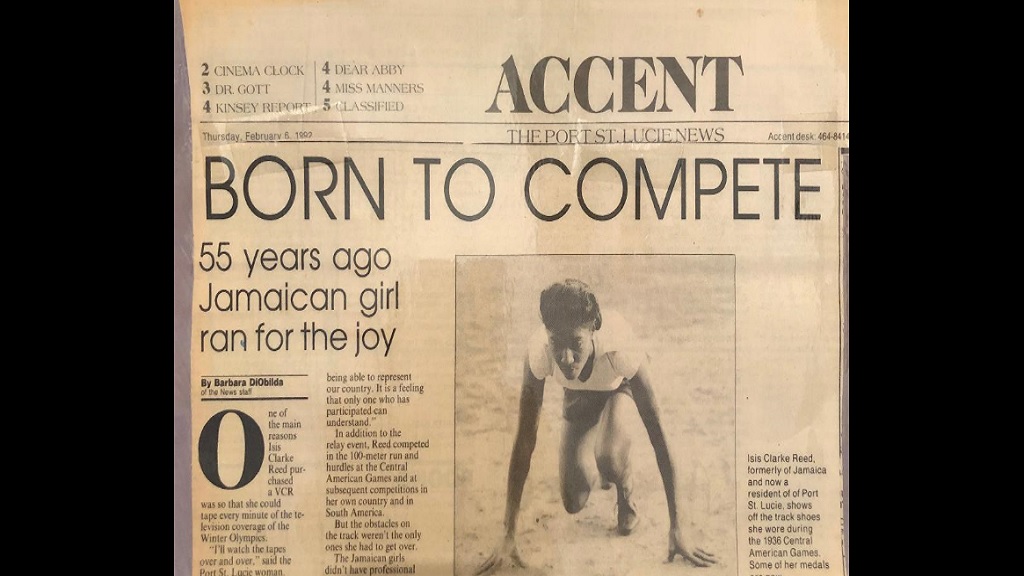 A newspaper cover page with Clarke on her mark.

Following the war, the CAC Games were held in 1946, this time in Barranquilla, Colombia. Clarke-Reid was the only returnee from the 1938 relay team, and this time she was joined by Thompson, Hyacinth Walters and Cynthia Llewelyn. The Jamaicans mined silver that year behind Panama, which was a force in track and field in those early years. The great Herb McKenley was part of the 1946 team.

Clarke-Reid was not one of the four women who were part of the history-making 1948 London Olympic team, as she had left Jamaica a year earlier for the United States, first stopping in New York.

While in the Big Apple, she was first married to Richard Green, and the union produced one son, Richard Jr.

Following her divorce from Green, she later married a Jamaican, Fred Reid, and the couple had one son, Carlton, who died in 1993. His father died a year later. Clarke-Reid’s first son, Richard, also predeceased her.

Clarke-Reid was born in Kingston on November 18, 1919. According to newspaper articles from 1938-1939, when she dominated local sprinting, she was affectionately called ‘Champion Girl Sprinter’ and ‘Champion Lady Sprinter’. 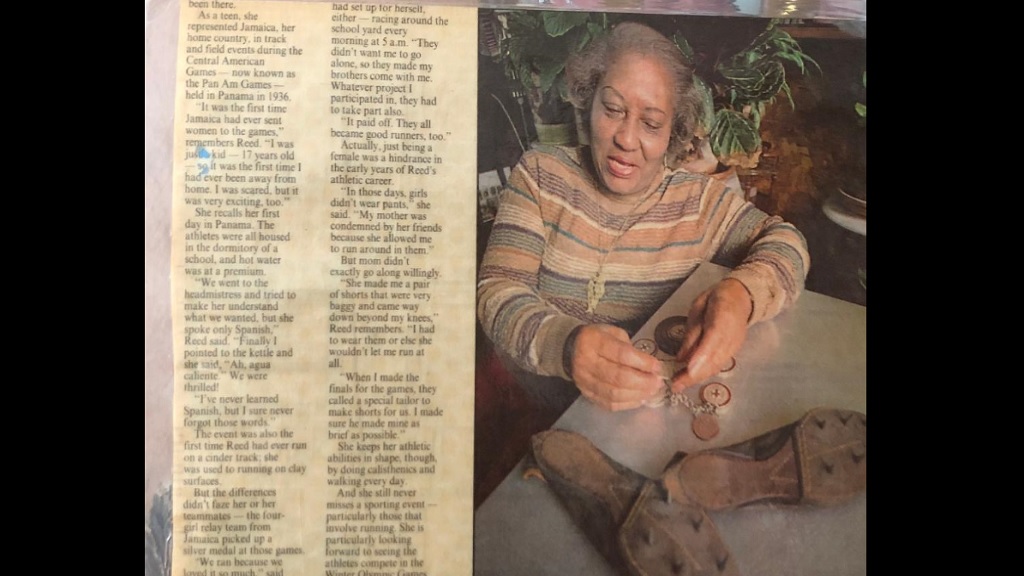 Clarke displaying some of her gears on the track back then, and the medals that she won.

The young Isis lived with her parents and four brothers on Molynes Road in St Andrew. She attended the nearby Half-Way Tree Primary School, which was at the time located on Hope Road.

With no coach, the siblings, who were all sporting enthusiasts, worked out together at Half-Way Tree Park.

In a 1992 article in the Port St Lucie News, Clarke-Reid recalled that when she arrived in Panama City for her first CAC Games, it was the first time she was running on cinder tracks. Prior to that, she would run on dirt surfaces in Jamaica. Cinder tracks, which place a lot of stress on athletes’ knees, have been replaced with all-weather synthetic tracks.

The lanky sprinter recalled that she would race around the school yard every morning at 5am. She was one of the lucky ones, as very few girls took part in track and field activities in those days, partly because of cultural practices that viewed it as being too rough a sport for young girls.

However, Clarke-Reid was fortunate in having four brothers. As long as they accompanied her to train in the mornings, her parents were okay with that.

Clarke-Reid also recalled that in those days, girls did not wear pants. As a result, the shorts she trained in, which were sewn by her mother, were baggy, and fell below her knees.

“I had to wear them or else she wouldn’t let me run at all.

“When I made the finals for the (CAC) Games, they called a special tailor to make shorts for us. I made sure he made mine as brief as possible,” she told the Port St Lucie News.

Clarke-Reid’s brother, Mortimer, also had some success on the track. He famously won a 1,500m race at the annual Jamaica Amateur Athletic Association’s track and field championships at Sabina Park in January 1938, upsetting the pre-race favourite, the so-called ‘Flying Farmer’ Grant.

Reflecting on her time on the track eight decades ago from her home in Florida, Clarke-Reid said: “It was great. I felt like a champion.”

“I offer my congratulations to Isis Clarke on a wonderful innings, and do recognise her contribution to laying the foundation for our (Jamaica’s) current status in the world of athletics,” said Mike Fennell, former President of the Jamaica Olympic Association (JOA), when contacted.

Ganja worth over $10 million seized in Portland operation