Your Hero: Constable Burke helping others despite living in pain 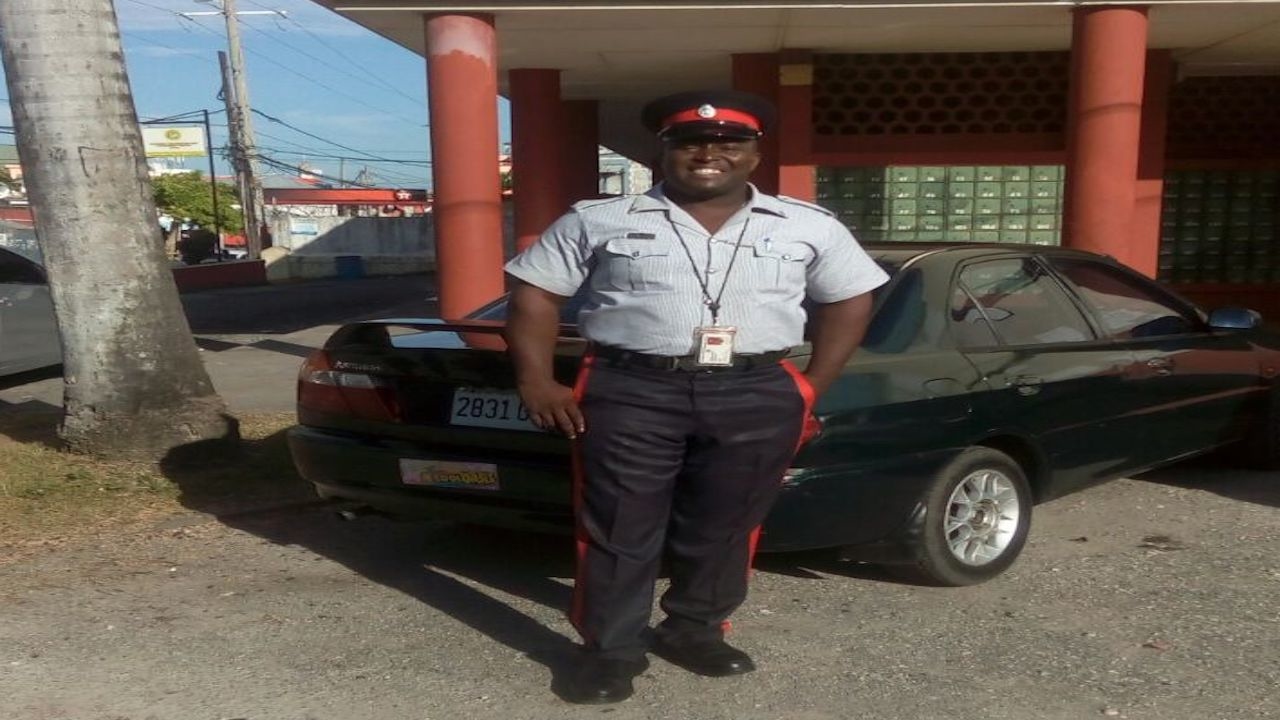 Though there are many dark days of pain for Constable Winston Burke, he remains firmly committed to helping others in St Ann find employment or access training to further their career development.

This selfless act has made him an unsung hero in the minds of many, especially now that that the 33-year-old constable, who is assigned to the Community Safety and Security Branch of the Jamaica Constabulary Force (JCF) in St Ann, requires the assistance of a cane to move around.

Burke, who has been a serving member of the JCF for seven years, has been suffering from excruciating pain since November 2017, caused by a damaged spine for which he requires surgery.

But despite his mobile limitations, the zeal and the passion that this police constable has for assisting others remains unwavering. This character trait, among others, has led to him being described as an unheralded hero in Jamaica. 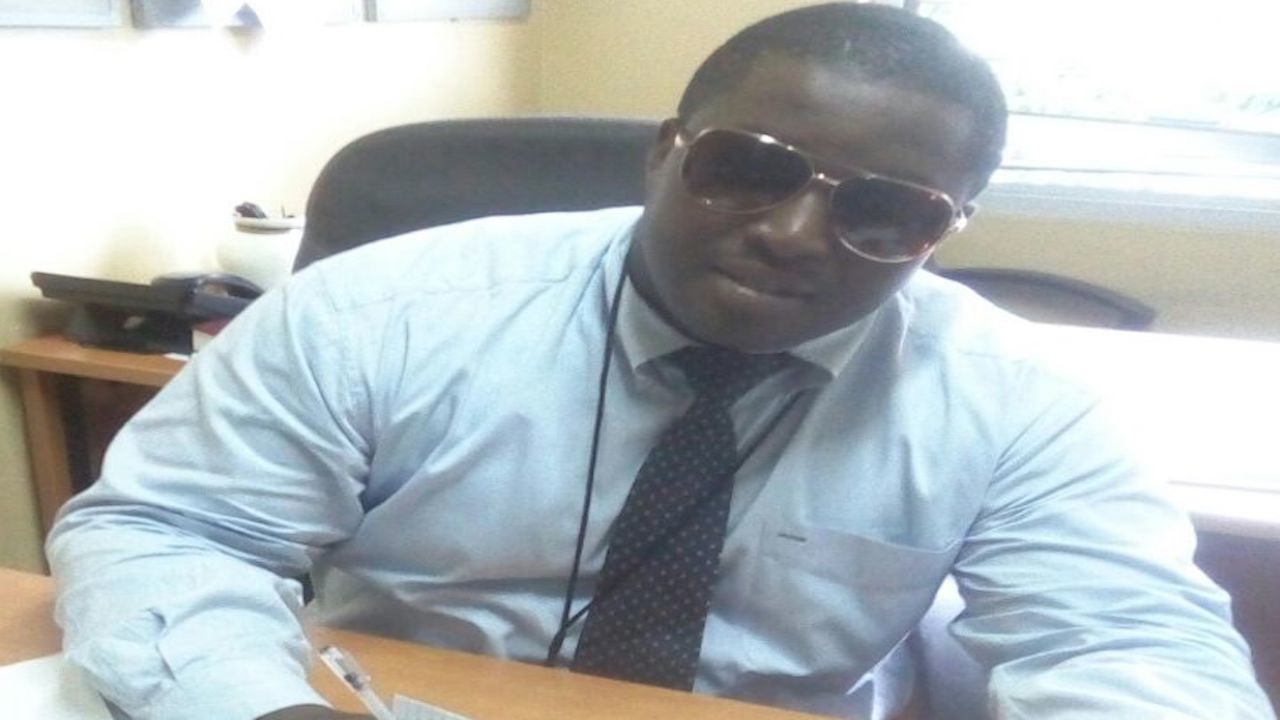 However, the humble police officer does not see his actions as being heroic, but merely doing what he was planted here to do.

“Mi wouldn’t say heroic enuh. Mi would a say yuh do what you’re here to do with the time given to you. If people say dat heroic- helping a lot of people in the parish- well so be it. Me nah go classify miself as a hero, but me classify miself as a humanitarian,” he explained in an interview with Loop News.

But will Constable Winston Burke ever stop this selflessness.

“When breath leaves the body,” he said, jokingly.

His lifetime commitment to service was born out of his own early sufferings, which molded his character.

“All mi a try to do is not to make people suffer like me. I know what is like to have one orange for three days… Honestly speaking, mi use to suffer enuh, especially when mi use to at college, but people wouldn’t know as mi always have a smile pon mi face,” said Burke.

“Mi use to go days and nights, even as a police mi go hungry just to help people, because mi use my food money and use it send someone go school and bare one night worth of hunger,” the Dinthill Technical past student, who joined the police force in 2011, added.

These days, Constable Burke, who went on sick leave in November last year, because of his medical condition, uses his mobile phone and his email to get in touch with several employers to seek jobs for persons from his home in Moneague, St Ann. 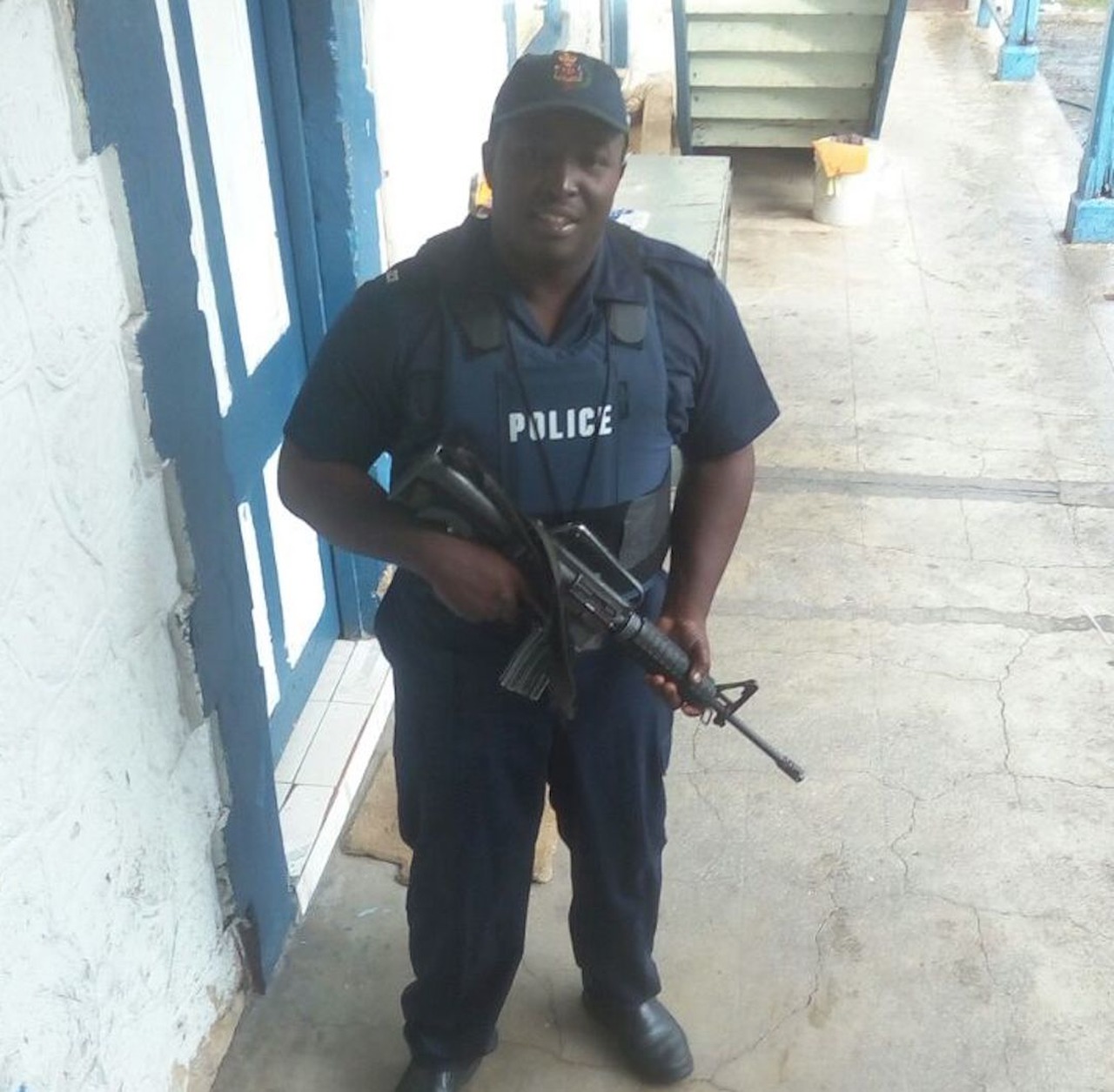 “My aim is to target the less fortunate persons; not only persons who leave high school, but persons who can’t find work or need help… I help persons who live all over St Ann and sometimes persons call me from Clarendon, Westmoreland and even St Elizabeth seeking jobs,” he explained.

He boasted that he recently assisted 80 persons in seeking jobs at a security company in the parish.

Sheron Barnett, who is employed at Marksman, is one of those who has benefitted from Constable Burke’s assistance.

“He (Constable Burke) is always helping me to get a job,” she explained, while pointing out that it was the policeman who had informed her regarding a job at the security company.

While adding that she was nervous for the interview, Ms Barnett explained that the St Ann policeman reassured her and gave her pointers about what to expect.

“He (Constable Burke) is very responsible and is always reliable. He is always helping out in any way he can,” she indicated.

Kadeka Samuels, a nursing student at the Career Nursing International in Ocho Rios, heaped praises on the policeman for aiding in her efforts to receive a scholarship from the institution. She revealed that the scholarship has been “a great help” to her as she did not have the financial means to further her education.

“Constable Burke has a very big heart. I would say he is a very kind person too, because he didn’t know me from anywhere and he assisted me… He is also a very helpful man, because when I go on his social media page and I see the many people he has helped, I say ‘God must have blessed this man, because he has a big heart to help so much people,” she declared.

“If mi call on him financial wise, he helps me in ways that he can. He also assists me with my education as certain things that I don’t understand, he explains it to me and breaks it down to me in the simplest form, so that I can understand,” he shared.

Taylor is appreciative of the policeman’s impact on his life and the zeal he has for helping others.

“I just want to say thanks to Mr Burke. We all appreciate the help he has given us, which has changed our lives and I hope he continues to help other persons,” he said.

Constable Burke’s heroic acts had been on spectacular display in April last year, as he was the driving force behind the staging of a police job fair held in Ocho Rios. The job fair, which saw several companies partnering with the police, helped approximately 273 persons gain meaningful employment at companies.

But while he is a hero in the sight of others, Constable Burke requires heroes of his own in a desperate race against time to return to days of walking without a cane.

In April 2013, a vehicle ran into the back of the policeman’s car while he was on his way to work, which resulted in him suffering today from a spine injury. He began feeling pain after the accident, but doctors suggested he was suffering from muscle spasms. 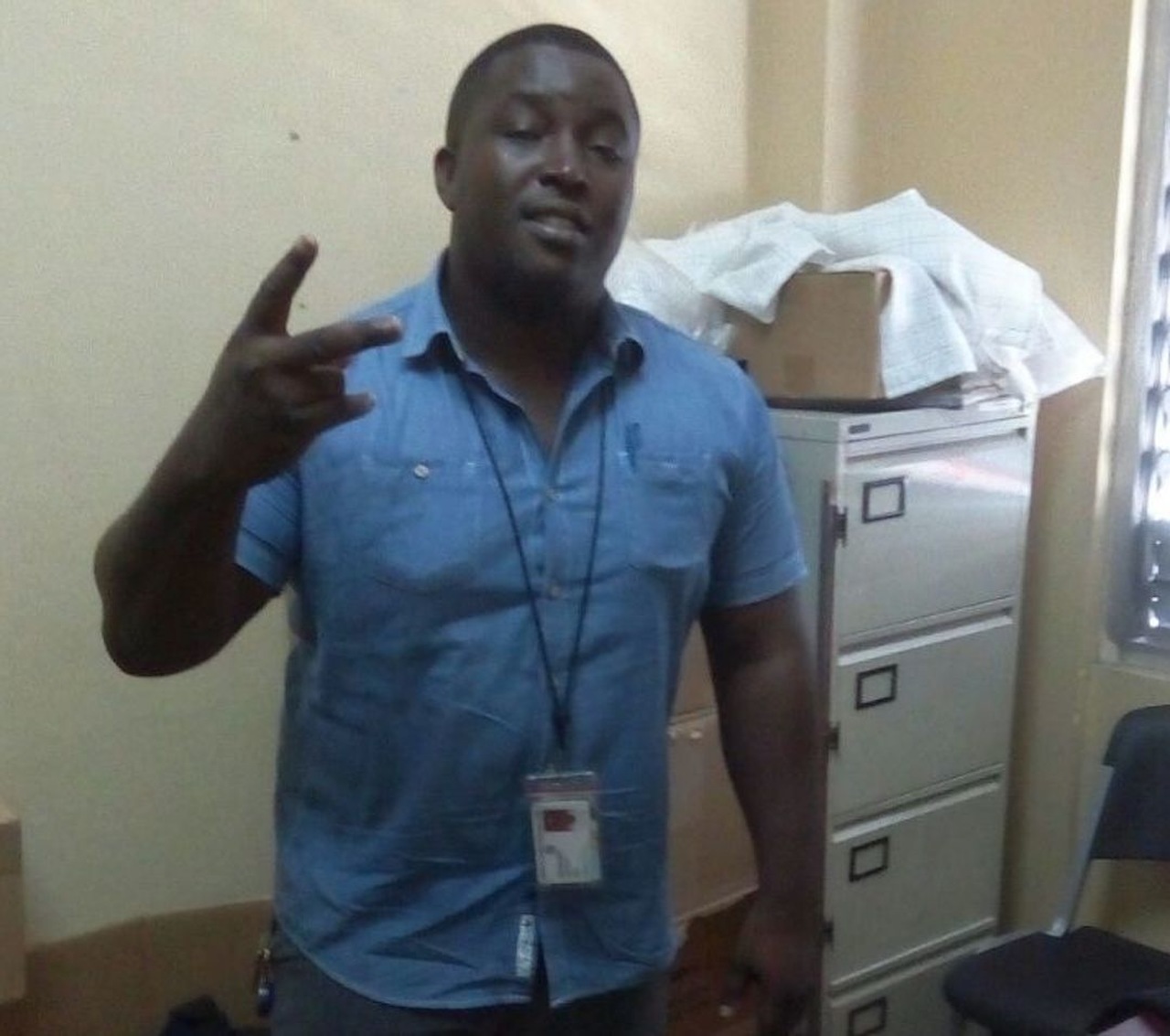 The pain became overwhelming in November last year and the results of an MRI confirmed the injury that urgently needs surgery.

Burke requires approximately $472,000 more to undergo an L4-L5 Discectomy for Cauda Equina Decompression, which costs a total of $2.3 million.

According to Burke, two discs, both the L4 and L5, are severely damaged in his spine, which has caused him to be in “excruciating pain non-stop.”

The L4-L5 are the two lowest vertebrae in the lumbar spine, and together with the attached disc, joints, nerves and soft tissues, it provides a variety of functions, including supporting the upper body and allowing motion in multiple directions.

With its heavy load and range of flexibility, the L4-L5 segment is also prone to developing pain from injury and/or from degenerative changes, such as the L4 vertebra slipping forward over the L5 vertebra, causing lower back pain and/or leg pain (sciatica).

It was almost a dire situation for Burke earlier this year, as despite his insurance company standing some of the cost, along with the Police Federation, he was still in need of over a million dollars.

But the CHASE Fund has since stepped in with a donation of $900,000, thanks in part to a recommendation written to the fund by Assistant Commissioner Fitz Bailey, who was then head of the Area Two Police.

However, the longer the delay without the surgery is the more intense the pain becomes for Constable Burke.

“I can’t move without a cane. There is also this pain in the back, every time yuh walk is like something a tear in your back… It is worse in the nights,” he revealed, while adding that the pain has prevented him from sleeping on a mattress and having to resort to the ground.

If the surgery is not done soon, the policeman faces the harsh reality of being disabled permanently.

Despite one thinking that he would gain urgent assistance from his background of caring for others, his monetary needs remain urgent.

But he has no intention of ending his quest to assist others in light of the aid being slow to accomplish his goal of completing surgery.

“The goodness of the heart cannot be changed by what people do to you unless you want it to change… If you look at how people treat you, you going to become a monster, because if I look at that and say ‘look how people treat mi and mi nah help nobody else and ting’, I would become just like them. I can’t live my life like that. Once mi can help yuh, mi help yuh and mi ago use all a di resource to help yuh,” Constable Burke argued.

With hope etched dearly to his heart, the Moneague, St Ann resident, has already drafted plans for a second staging of a job fair in the garden parish. He has also crafted plans to launch a club in St Ann that “targets youth at risk through entertainment, sports and scholarships,” as well as the creation of a dance competition titled, ‘St Ann Best Dance Group.’

He will be seeking to work with stakeholders overseas to enable him to get these projects off the ground. This is all dependent on the completion of his surgery.

“If we learn fi help each other, it will be better for us. We will have less crime,” Constable Burke posited.

Individuals, who wish to assist Winston Burke with his surgery, may do so by making a donation to 584257849 NCB, Ocho Rios branch. Persons can also visit his Go-Fund me page at https://www.gofundme.com/5xaydw-urgent-spinal-surgery, to make donations.

* Loop News is honouring unsung community heroes in the lead up to National Heroes Day. Do you have a heroic figure in your community that you believe deserves to be featured in this series? If you do, send a testimonial about your community hero to julian@trend.media.

Your Hero: Uncle Mikey - a man for all seasons in Caymanas