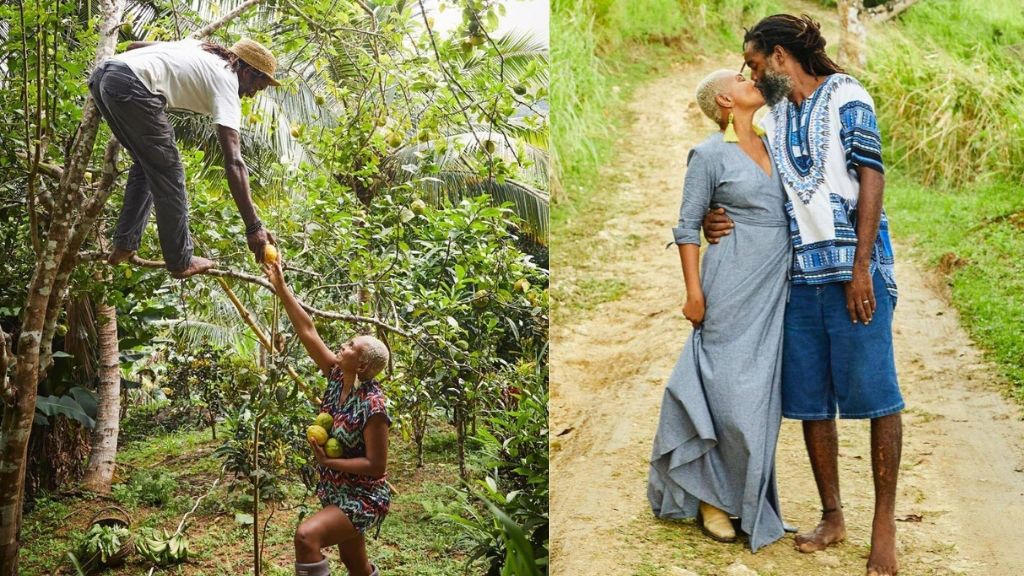 Disclaimer: This article was written under the influence of popular love songs.

Pairings are tricky, you see, and have been considered, on occasion, unimaginable and unexpected.

But, unlike oil and water, nearly all things are said to have yin and yang qualities – day and night, water and fire, active and passive, PB&J, the list go on.

There are instances when a pair could not be more opposite, and other times when together, they make a stronger unit than they were apart.

Swipe through for the twosome love

A twosome represents a magical pairing with a bond so natural and effortless, others can’t help but admire/aspire.

Love and Valentine’s Day are inclusive and therefore it's not only about marriage and/or intimate relationships, but also family and best friends.

’Tis for this reason our twosomes include best friends Garfene Grandison and Terri-Karelle, and Shenseea and her ‘one son’ Rajeiro Lee, among other couples.

And, in the same way, many Jamaicans love a fried chicken with curry gravy pairing, we love to see our favourite twosomes share their love for all to see.

The beauty queen/politico Hanna and the businessman Lake keep their love life private, but, dare we say, it’s all a part of the appeal.

Ever since the two became three with the introduction of their goober Xiah, our love and admiration for the happy couple too, has blossomed.

He’s a man of very few words, and she has a nickname for all her loved ones. The constant PDA shared by Ann-Marie and her ‘Poomps’ is heart-warming, to say the least.

Phillip and Odetta exemplify the phrase “movement by myself, but a boss when we’re together”. The only difference is, both are bosses in their own rights, and their affection is palpable.

We’ve hardly been introduced to Chin’s hubby Brandon, but, since winning The Voice, Chin has become Jamaica’s sweetheart and if she loves Mr Crooks, we love Mr Crooks.

Though Shenseea and her “…kryptonite; the only person I would die for” are the only mother-son couple on this list, we couldn’t ignore the obvious bond the two share that often make us go “aww…”

There couldn’t be a love list about tight bonds without mention of Frick and Frack, Garfene and Terri.

From making red carpet appearances together to twinning in “bestie and me” tees, we can’t help but love the love that Feeny and Terri share.

Time and time again this creative duo melts our hearts with cute IG posts that make even the most critical among us lust for young love.

There’s no denying the love shared and often expressed publicly between these two. The duo adds a new dimension to ‘family is everything’, but we can appreciate that at the core it’s all love.

Mr and Mrs Asafa Powell continue to celebrate their love and affection towards each other, and more recently, baby Amieke.

He breaks records and she broke the internet with the announcement of their lovechild.

We reckon in the years to come and with the arrival of Baby Bolt, the storyline of this charming love will develop.

‘Nino’ and ‘Shanzi’ is the hottest couple on social media. And the majority of their fans tune in to see what funny couples’ games they’re re-enacting on YouTube or which exotic destination they travel to next.

These two lovebirds have been together for quite some time, and since tying the knot in 2016 have inspired several of their peers to follow suit.

The way he speaks of his “phenomenal woman” is awe-inspiring.

Nicole and ‘Sasco’ share an undeniable fondness for each other, and together the two have created an admirable bond that many aspire to recreate with their own baes.

What do you get when you put a lawmaker and a law enforcer together? #TeamTaylor. Their decade-long relationship gets better by the year and gives hope to many young couples.

No couples list could be complete without the morning show personalities we love to love.

On December 29, the duo celebrated their one-year anniversary as husband and wife.

Four days prior, the Lewis’s announced that they’re expecting.

We dare say love is in the air and the honeymoon is far from over.

Love has found its way to the hearts of Kamila-Ann McDonald and Jason Panton, who invite us all into their newfound partnership with posts on IG, celebrating their love.

She left her city life in New York for him. He built her a home in the wilderness, and together they share their undying love and affection with thousands of people at their Stush in the Bush eatery.

Any couple of a particular age that is on the gram and expresses an apparent fervour for each other with just about each post gets an A+ in our book.

Valentine's Day: Nine ways to show someone you love them

VIDEO: What to do this Valentine's weekend?